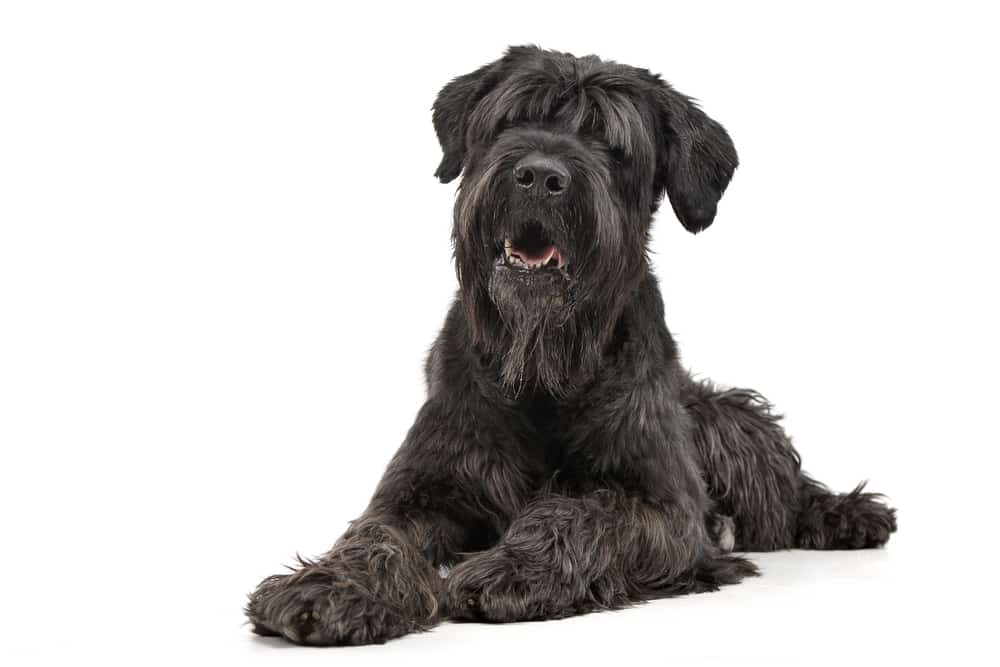 The Black Russian Terrier is a breed originally developed in the region formerly called the Soviet Union. That accounts for the ‘Russian’ part of the name. The accepted coat color for these dogs is black, thus the descriptive ‘Black’ in the name. The term ‘terrier’ is misleading, however.

According to the breed’s American Kennel Club (AKC) listing, the Black Russian Terrier isn’t a member of the terrier family at all. They are in the Working Dog category and belong to the pinscher and schnauzer family.

In the 1940s, the Soviet military found itself in need of suitable working dogs. Taking a scientific approach to the problem, they imported breeds from the countries they occupied. One of these was a Giant Schnauzer named Roy. After breeding Roy extensively with females of breeds such as the Airedale Terrier, Moscow Water Dog, and the Rottweiler, and later introducing as many as 17 other breeds, the all-black offspring distinguished themselves, earning the name Black Terrier group.

In 1968, the International FCI registered a Black Russian Terrier breed standard and officially recognized the breed in 1984. Breeders of Black Russian Terriers emigrated to other countries over the years, and the breed’s value as companions and family dogs became obvious. Their popularity quickly spread. They only arrived in the U.S. in the 1980s.

The AKC admitted the breed in 2001 into its Miscellaneous class, and the Black Russian Terrier became a regular member of the Working Group in 2004.

Black Russian Terriers are large, massively powerful worker dogs. The AKC describes them as “just plain big” on their website.

These scientifically-developed dogs are majestic in appearance and rare in number. They are one of the more rare breeds recognized by the AKC. Males range in height from 27 to 30 inches, with females ranging from 26 to 29 inches. Regardless of sex, weight can range from 80 to 145 pounds, although some have reached weights approaching 200 lbs. The life expectancy is from 10 to 12 years.

They are a bit top-heavy, with the head of a Black Russian Terrier accounting for 40 percent of its total body weight. Strong and agile, these dogs are heavily boned with well-defined muscles. While both males and females are impressive in their size and build, the males are larger, stronger, have more bulk and are more powerful than the females.

The head is one of the most striking features of the Black Russian Terrier. Sometimes described as ‘brick-shaped,’ the head is moderately broad with well-rounded cheekbones and a flat forehead. They have a strong, broad muzzle that tapers slightly.

Black is the only color accepted by the breed standards. A few stray gray hairs are permissible.

This hearty breed has great endurance and adapts easily to a wide range of climates. Their coat is a rough, thick layer that’s double-coated. The outer layer of coarse, dense, wavy hair is basically weatherproof, repelling rain and snow. The soft, short, and dense undercoat protect them from temperature extremes. Untrimmed, the coat varies from two inches to six inches.

Black Russian Terriers are lively, energetic, confident, stable, and dignified. They have strong protective instincts but will calm down rapidly when a threat disappears. Unprepared owners will quickly discover Black Russian Terriers can be dominating and intimidating if not handled properly. This breed needs a strong leader in the home and a trainer. While they can be stubborn, they are also reliable, intelligent, powerful, and sensitive dogs. They are protective to family members while being indifferent or wary when strangers approach.

Early socialization and training is an absolute must, especially during the dog’s first two years. All family members need to participate because the dog needs to see each family member as a leader. Otherwise, the dog may obey one or two family members and ignore the commands of another.

Black Russian Terriers love young children and enjoy playing with them. Because of their large size, however, they can accidentally knock small children over. If they’re raised with other dogs or cats, they tend to do quite well, although it isn’t recommended that you keep two male Black Russian Terriers in the same home, as they may fight for dominance.

This breed craves contact with humans and other animals. They love to please their humans, and they only bark when necessary. They want to live closely with their humans, so keeping one in a kennel outside is unacceptable and tantamount to torture from the dog’s point of view. When inside with their families, they will follow family members from room to room just to remain near them. Human contact makes them happy.

By nature, these dogs are aloof with strangers. They need to have regular exposure to different people, as many as possible, beginning in puppy-hood. If this isn’t done, they can become overly protective when strangers are near. They may even bite out of fear and aggression. Be sure they get lots of social contact with friends, family, neighbors, and strangers to build their interactive skills.

Black Russian Terriers don’t need a special diet unless recommended by a veterinarian. Most high-quality commercially manufactured dog foods should be fine. Make certain you’re serving up an age-appropriate dog food, whether you’re buying it or preparing it yourself. If you have questions about your dog’s diet, check with your veterinarian.

Your Black Russian Terrier needs daily exercise – something more than hanging out alone in the fenced yard. Because of the need for human contact, your pet will spend the time at the door waiting to come back in. These dogs do well in apartments as long as daily exercise is a priority and offered religiously.

Grooming is a must with the wiry, thick coat of a Black Russian Terrier. You should have your dog on a regular grooming schedule that includes brushing once a week. For this, you’ll need a slicker brush, a rake for the undercoat, and a stripping comb. These tools should be available at any good pet supply store.

Their facial hair needs regular trimming and the thick coat, which sheds seasonally, requires consistent regular grooming. Your Black Russian Terrier should see the groomer at least every other month and should get a good bath at least once every season.

Black Russian Terriers’ nails don’t wear down naturally. This can result in painful tears and other foot problems. You’ll need to keep them trimmed on a regular schedule once or twice a month. If you’re not confident in your ability to trim the nails without causing bleeding, you can get it done at the groomer’s or at the vet’s office.

You should also check your dog’s ears once a week. Look for redness, bad odors, and soreness, all of which can indicate an ear infection. Wipe the ears with a cotton ball dampened with a pH-balanced ear cleaner. Clean the outer ear without inserting anything into the ear canal.

Black Russian Terriers tend to be hearty, healthy dogs, but like any breed, they can have certain health problems pop up. One of the major concerns is allergies.

Remember, any dog can have allergies. There are three major types of allergies:

All of these allergies can be effectively treated by your veterinarian.

Other, more serious conditions that may strike a Black Russian Terrier include:

Though they were originally bred for work as guard dogs, these massive, powerful, intelligent dogs have hearts to match their size and the intelligence to quickly learn to fit into a loving family. A Black Russian Terrier craves the attention of humans: it’s in their DNA. So when a human is willing to give the love they crave, they’ll willingly give it back ten times over.

These dogs require training and socialization, beginning at a young age. This process brings their temperament into perspective and morphs them into the loyal, loving family member they want to be. They love to play with children and are protective of all the members of their family.

Like any breed, the Black Russian Terrier can have health issues, but don’t let that prevent you from bringing one of these magnificent animals into your family. If you’re concerned about potential veterinarian bills, consider covering your pet with an insurance policy of his/her own. It’s inexpensive and can give you the peace of mind you want. Click HERE to get a quick quote on insurance for your pet from Pet Insurance Quotes.