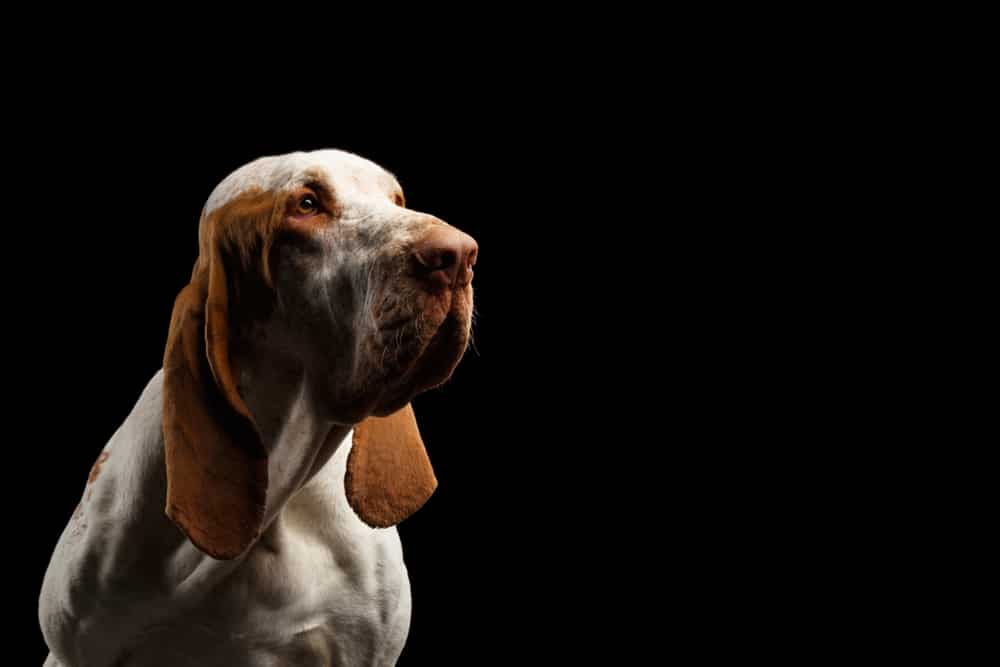 The Bracco Italiano stands out with its droopy lips, long ears, shiny hair, and soulful expression. Considering their strong muscles, likable personality, and athletic body, it is easy to understand why these dogs are the pride of Italy.

Despite having developed initially as a hunting dog, Bracco Italiano’s gentle nature slowly endeared them to pet lovers. It has since become one of the most sought after family pets. Nevertheless, it rules in the hunting front and can perform all types of hunting, including points and retrieves.

The Bracco Italiano is an ancient hunting breed with its roots in Italy, hence the name. The breed first came to the fore in texts and frescoes from as early as the fifth century. They were later bred by the Medici and the Gonzaga families before the royal families and aristocrats took them over. Since this breed was often offered as gifts to noble families in Spain and France, there is a high possibility that it may be the ancestor to European breeds.

Based on ancient historical records, the white and orange variants came from Piedmont. They were smaller and shorter in stature to better adapt them to mountain navigation. On the other hand, their white and chestnut counterparts got bred in the lowland areas like Lombardy.

Both variations, unfortunately, became extinct as we entered the 20th century. Luckily, the breed survived from the efforts of notable Italian breeders who worked hard to preserve the breed.

Bracco Italianos were first explicitly bred for hunting. They were trained to help the flush game for falconers and drive birds into nets. After the introduction of guns to the hunting front, these Italian pointers were relegated to pointing and retrieval. The breed’s standard was released in 1949 by the Societa Amatory Bracco Italiano. It was introduced to England 40 years later in 1989.

As much as the exact origin of the breed may not be authoritatively known, people believe it to be a cross between the Asiatic Mastiff and the Segugio Italiano. The breed is not complicated when it comes to diet. Considering its size, a high-quality dog food formula will suffice. This is determined by whether you are looking to keep the dog for hunting or specifically as a family pet.

However, it is essential to increase its food ratio when the dog is undergoing training. The calorie intake should be minimal to avoid cases of being overweight. Just like other pets, the presence of clean and fresh water is a necessity for these dogs. Engage your vet to determine which foods are good for the dog’s health.

Intelligence is one of the notable features of this Italian pointer. Apart from being naturally eager and easy to please, the dog is sharp and has great hunting instincts. Based on this, the training regime for the dog should be consistently gentle. If treated with harshness and cruelty during training, the dog may easily stop trying. For excellent results, start the obedience training when the dogs are still young. Besides, training gives a dog some mental exercise and keeps it sharp.

Male Bracco Italiano Weigh between 55 and 88 pounds. The females are slightly small when compared to males. This breed is an excellent companion pet and it gets along well with children. It may bark when strangers approach, thus making them effective guard dogs.

How much do they cost?

The Bracco Italiano is a rare breed, and you may need to go on a waiting list if you are looking to get one. When available for purchase, a well-bred pedigree Puppy will cost approximately $800. However, you will have to factor in the cost of food. This might cost you between $70 and $100 every month. Other notable costs that may add to the overall cost include common expenditure like veterinary costs.

Although Bracco Italiano does well in an enclosed area, they need adequate exercise to stay fit. Taking the canine for a 30 minutes’ walk every day will improve its health. Bracco Italiano is generally believed to be a healthy breed. However, just like any other dog or pet, they may be prone to some minor health conditions from time to time. Common ailments that affect this breed include Entropion, hip dysplasia, ear mites, and umbilical hernias. Notably, the breed is specifically sensitive to anesthesia especially to the drug Domitor.

As a breeder, you need to pay special attention to the dog’s long pendulous ears for common ear infections. Always use a veterinarian-approved ear cleaner at least once a week to keep the ears clean.

Before purchasing a puppy, check if it has a vaccination certificate. Puppies are given a shot when they are between 10 to 12 weeks. The second shot comes two weeks later, but this can be discussed with the vet on whether it needs to receive more annual boosters.

On average, the Bracco Italiano has a life expectancy of 12 to 15 years.

Hip Dysplasia – It may be pricey treating your Bracco Italiano from hip and elbow dysplasia. However, this will depend on whether your dog is going through early-stage pain or end-stage arthritis. For younger dogs, the surgical diagnosis may range from $1,500 to $4,000 per elbow.

Entropion – This may involve Blepharoplasty that costs anything between $3,000 and $5,000 in cases where a general practitioner performs it. Otherwise, veterinary surgeons and ophthalmologists can charge between $500 and $1,500.

Umbilical hernias – In cases where emergency surgery is needed for a previously undetected hernia, the cost can be quite sizeable. However, for a less complicated situation, the costs may average $500.

The Bracco Italiano may be considered a generally healthy breed, but this does not rule out the likelihood of ailments or accidents in the course of its life. This necessitates that you take an insurance cover for your Italian pointer to achieve peace of mind.

Having noted the various coverage areas by the major insurance providers, it is important that you pick out an insurance provider that will work for your Bracco Italiano. The goal, in this case, is to get the most affordable provider and one that fully understand the conditions of your dog to offer quality coverage. Notably, this is determined by the age, sex, and condition of your dogs at the time of coverage application. That said, check out the top providers for dog insurance.

The cost of insurance for your Bracco will mainly depend on your location, age and the package of coverage you choose for your dog. You can expect to pay anything between $10 and $100 as monthly premiums. For decent coverage, you might end up paying an average of $44 per month. This is nothing much compared to the thousands of dollars you may incur in case your dog gets sick or is involved in an accident.

With all said and done, you have no reason not to own a Bracco Italiano. These loyal, dedicated, affectionate, and likable family pets can be worth your investment. The fact that they do not mind staying alone for a while makes them perfect options for the working class.

However, this may not be the best fit for a first time dog owner who doesn’t have much outdoor activity. With their outgoing personality, you may need to have enough space before you acquire one. Nevertheless, this is one of the family pets you would be proud to own.