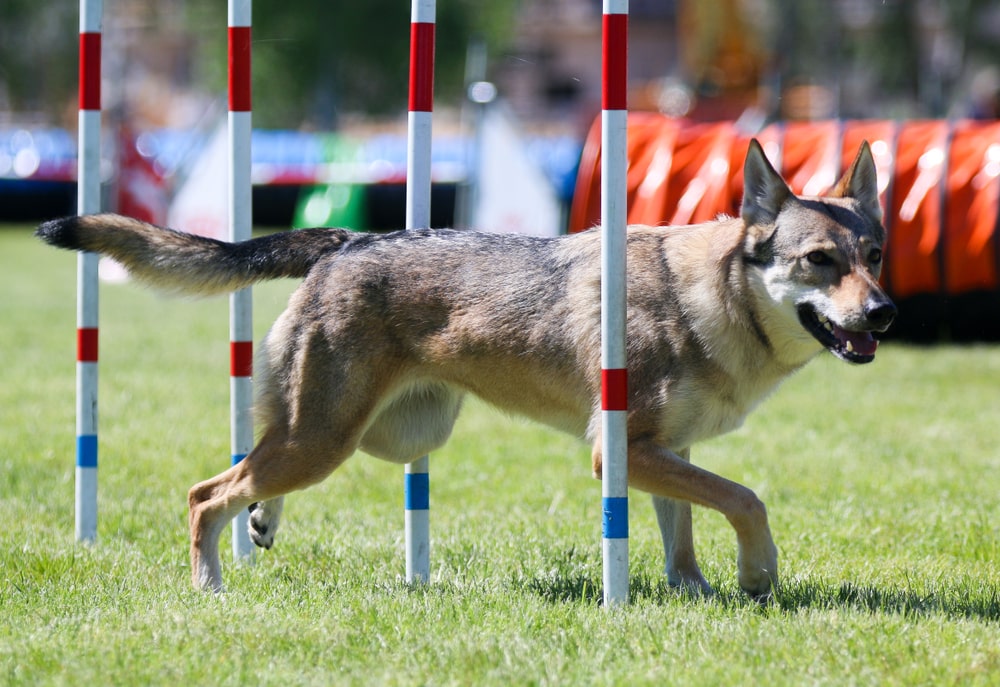 The Czechoslovakian Vlcak is a beautiful dog and a living link between man and nature. These fierce animals could be a bold choice for your next pet.

You don’t need to be told of the Czechoslovakian Vlcak’s wolf heritage. They look extraordinarily similar to the wilder side of their family. This dog was even filmed as a wolf in the movie Alpha. They have deep amber eyes that are small and slightly slanted.

Their coats are wolf-like too, sporting a yellow-gray or silver-gray. Their thick, wiry fur is ample protection from the elements. Occasionally there will be a few patches of black fur or other characteristics to let you know there is some German Shepherd in there.

Their bodies are broad and robust, with a muscular flat chest and an athletically brought in the stomach. They have a straight back in contrast to German Shepherds.

The head of these canines is generally symmetrical, proportional, and well-muscled. They have scissor teeth and strong jaws. Their characteristic triangle ears are wolf-like and always at attention.

Some wolf dogs bark, but some others need to be taught to bark. They will also howl, growl and make a host of other noises besides barking.

What they were bred for

The dog was initially bred in, you guessed it, Czechoslovakia. They were originally a military dog bred for the Border Guard in Libejovice. In the 1950s German Shepherds were crossbred with the Carpathian wolf. The goal of the soviet breeding program was to combine the power and endurance of the wolf with the loyalty and trainability of the dog. Viable hybrids were produced with both male and female German Shepherds and wolves.

After several years the breeders produced dogs that had the desired characteristics, being the best of both dog and wolf. This delicate balance was achieved usually after the third or fourth generation of hybrids. With such favorable results, the breeding continued. The experiment ended in 1965, and a plan was put in place to breed these dogs. In 1982, the Czechoslovakian wolfdog became a national breed.

Wolfdogs are impressive athletes and worthy companions. These are friendly and faithful dogs that are devoted to their owners. You wouldn’t accuse them of lacking intelligence. They’re very smart. They’re a very sociable canine. They are aloof around strangers but very warm once they get used to you. If left alone for too long, they will suffer severe separation anxiety. They are pack animals that need constant mental and social stimulation.

They are incredibly loyal and will fiercely defend their families. Though they won’t attack for no reason. They are very strong-willed and have a lot of Alpha in them. Hardy and independent, they are bounding with energy and need an outlet to drain some of it. Water and snow don’t phase them, and they feel most at home in the outdoors. Hunting instincts are still in these dogs, so know the risks of keeping them around small animals.

With the personalities of this primitive breed, training becomes essential. They need strong pack leadership that first-time dog owners likely can’t provide. Going to a box store and looking for training tips likely won’t be enough. These dogs are for experienced dog people only. You want to find a professional trainer that has experience with wolfdogs and training them. Socializing puppies with both people and other dogs is paramount to raise a healthy and well-adjusted dog.

Don’t expect to train them like any other dog. A firm hand and patience are necessary to bring them to heal. Positive reinforcement is the way to move forward, as treats may not hold enough sway. Wolf Dogs can get bored quickly, so high repetition exercises won’t work well and maybe flat out refused. These dogs aren’t stupid and will excel at a variety of tasks, but they need to see a reason to do it.

Exercising your Czechoslovakian Vlcak will consume a large chunk of your day. They are athletes and crave activities, and it can be almost impossible to wear them out. You need a lot of space for these dogs. Short walks won’t do it. We’re talking two hours a day of running around. Letting them out in the yard isn’t the answer. Though they may see animals smaller than them as prey, so keeping them contained or on a leash in public is recommended.

Your wolfdog wants to participate in interactive activities. Playing fetch fits the bill or accompanying you on a nature walk is fantastic. The kind of person who wants this dog is the kind that also craves to be active and spends a lot of time doing outdoor activities.

Caring for your pet

CSVs have a self-cleaning coat that will naturally rid itself of dirt and grime. They will rarely need washing. Like wolves, they have little body odor.

The thickness of their fur varies with the season, with a thick undercoat in the winter. They will shed twice a year, and during that time should be brushed once a day.

Their teeth should be brushed regularly. Their ears can have buildups of was that could lead to infections. Their black nails grow fast and should be trimmed to keep them neat and not split or crack.

Expert opinions vary, but wolf-dogs could be good candidates for a semi-raw to a raw diet. They will live well on actual meat if you can get it. If not, grain-free kibble is recommended. The higher the quality, the better and supplementing with meat can be a good choice as well. Follow guidelines that come with breed-specific formulas for medium-sized dogs. Your veterinarian or dog breeder is the best source of information on feeding frequency and what their diet should be.

As a newer breed, health concerns are not a common issue. These dogs tend to live longer than other breeds. Though there can be some health defects that are common with German Shepherds and other large dogs. Making sure that the breeder has tested both parents of your puppy for canine hip dysplasia, elbow dysplasia, degenerative myelopathy, and CERF (eye) are a good idea before breeding.

Finding a CSV might be the biggest challenge. You will have to find a breeder and wait for your puppy, which will run about $1500. You can check with the Czechoslovakian Vlcak Club of America to find certified breeders. In some states owning a wolfdog is illegal, so be sure to check the requirements of the state. Some states have outright banned their ownership, others require a permit, and a few have no problems with the dogs.

If you are a person that feels the call of the wild, the Czechoslovakian Vlcak could be the dog that answers that call. They may look like wolves, but they are intelligent animals that make loyal companions for years to come. They aren’t a breed for beginners or the faint of heart, but if you are willing to put in the time to train and exercise, they make an excellent addition to your pack.