» Blog » Pet Health » An Essential Guide to Your French Bulldog

An Essential Guide to Your French Bulldog 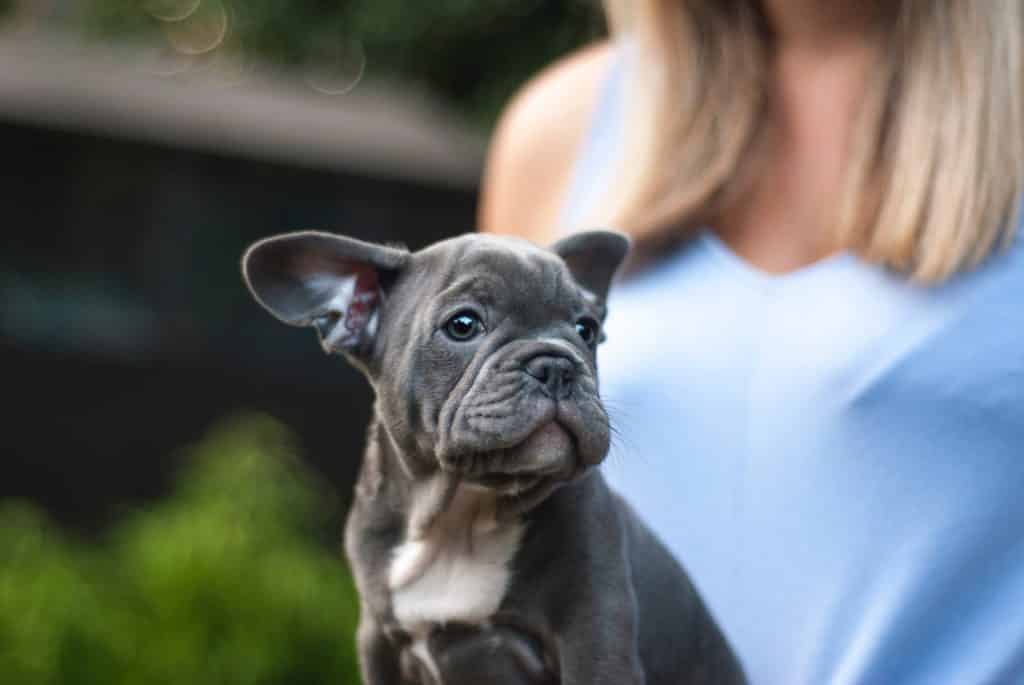 The French Bulldog or Frenchie, is the cutest little guy around. These guys are often mixed up with the Boston Terrier due to how similar they look. There are a few differences in the two like a slight size difference, colors, and even the life expectancy and cost. Here is a guide to the French Bulldog. We will take a look at everything you might want to know. Things like breed standards, characteristics and traits, history, what it’s like to live with one, how to take care of one, and even how to get your very own.

Here is an essential guide to your French Bulldog.

The History of the French Bulldog

The adorable Frenchie hails from England where it got its start. According to Dog Time:

The French Bulldog originated in England and was created to be a toy-size version of the Bulldog. The breed was quite popular among lace workers in the city of Nottingham and when many lace workers emigrated to France for better opportunities, they naturally brought their little bulldogs with them. The French Bulldog thrived in France and Europe, and his charm was soon discovered by Americans as well. The United States saw its first French Bulldog at the Westminster Kennel Club show in 1896. The breed was quickly nicknamed “Frenchie,” and it is still an affectionate name that is used today.

Supposedly they got their little “bat” ears by possible breeding with other dogs such as the pug or even the terrier. It was in Paris that these dogs were part of the elite society of Paris café life. Once back in England, it wasn’t as welcomed at first due to the rivalry between the French and the English. But, it was the Americans who decided the bat ear was the right way and now that is a distinct feature everyone recognizes no matter what country you hail from.

The French Bulldog has unique features that make him different from the rest. While he may look like a Boston Terrier – he’s got his own style and look.

The body of the French Bulldog is sturdy, with heavy bones and a compact build. Their size is small to medium and two of their main distinctions is their roach back and square head where the iconic bat ears sit.

The head of the Frenchie should be square and large. The eyes should be dark brown and lighter eyes are not favorable in the show ring. In fact, green or blue eyes are a disqualification – no matter how beautiful it might look.

The neck is well-arched and thick with plenty of loose skin around the throat area.

The French Bulldog’s legs should be muscular and strong with set-apart features in the forequarters. In the hind legs, they should elevate the loins.

Feet should always have split up compact toes and the nails should be stubby.

Now, keep in mind that these are show dog standards but it does give you an idea of the correct look of the French Bulldog even if you have no plans to ever enter a ring.

The French Bulldog has a lot of desirable characteristics. They are smart animals and do well at training if they are enjoying it. That is why training a Frenchie should be a fun affair like a game. Yet one thing to keep is mind is that the French Bulldog is an independent thinker. This means that they are going to need more than just commands for you to train them effectively. They also do not do well at certain competitions like agility or obedience. It also means that this can be a stubborn dog. It’s not that they can’t do something, it just may be that at that particular time, he doesn’t want to. This is why it’s imperative to make any training enjoyable.

As far as companions, these are lovable dogs that crave human companionship. This makes them not the right dog for someone who cannot devote a lot of time to them. For example, if your job keeps you away from home most of the day and night, it’s not fair to the dog and he certainly won’t thrive. They need your love and attention. The good news is that they get along with most people, including children. They may get a little possessive of their humans so keep that in mind.

On that note, make sure to socialize your Frenchie. Like mentioned, they love people so they need exposure to others. This helps curb excessive barking or some of the territorial behavior that they may possess at times.

Taking Care of a French Bulldog

As with any breed, it is crucial to know how to take care of a dog before you get one. Each breed has different health concerns, traits, and characteristics.

This is the easy part. Your French Bulldog will thrive off of a quality dog food. Choose the one that is appropriate. For instance, if your dog is older, pick a senior food. If it is overweight, choose a food for that. You get the picture. Also, look for food that has meat as its first ingredient so you’re not giving him filler or sub-par food. These dogs can get overweight which affects their health, but mostly their breathing. So make sure you don’t overdo the treats and curb any table scrap gifts.

Taking care of the grooming on a Frenchie is fairly easy. Since their coats are short and sweet, they rarely shed much. However, that does not mean to skimp on the brushing because that helps keep their skin healthy since it distributes oils. Also, their skin folds need to be kept clean and as with any dog, make sure their toenails get cut regularly.

The activity level of a French Bulldog isn’t really high demand. Just take him for a walk each day or spend some time outside playing daily. There are two things to consider though. One thing is that as mentioned, these dogs can become overweight if their activity levels do not exceed their caloric intake. On the flip side, these dogs can overexert themselves easily. So be aware of making sure your French Bulldog doesn’t overdo it and always be aware of weather that is too hot or too cold.

Like mentioned earlier, Frenchie’s need socialization with other humans and animals. They are intelligent but headstrong so sometimes training may be frustrating. But always know it is not because he can’t do it, he simply has to want to do it. Have some patience with this little fellow and you’ll be rewarded tenfold. Give him time to learn and keep up the training and he’ll be sure to show off what he learned in no time.

The Health of the French Bulldog

We decided to make this a main section since the French Bulldog does have a few health concerns to be aware of. Now, your Frenchie may never have any health issues at all, and this shouldn’t keep you from loving a French Bulldog, these are certainly things to keep in mind.

This is a condition common in many dogs. It can cause a dog to be lame in their rear legs and it is a genetic condition. If you choose a breeder to get your dog from, make sure the parents have had tests for hip dysplasia.

This condition is common in dogs with flat noses like the Pekingese, Pug, and the French Bulldog. You may notice that your dog seems to breathe loud and this is caused by airway obstructions due to short heads, narrowed nostrils, or elongated or soft palates.

Many breeds of dogs have allergy issues so while it is not solely the French Bulldog, they are susceptible as well. These range from food allergies and contact allergies to inhalant allergies.

This is a malformation of the vertebrae and can exist in one or more. There isn’t really a treatment in this case unless there is pressure on the spine. But, this is a condition that can lead to larger issues like pain, weakness, or in more severe cases – paralysis.

This is a problem that is very common among smaller dogs and is why you see some look bow legged. It is when the patella doesn’t line up properly and slips in and out of place. Even though it may seem differently, this is a hereditary condition. Symptoms may not show up until later though.

This is a herniated or ruptured spine and it happens by things like trauma, as the dog ages, or even something as simple as your Frenchie jumping off of a chair or bed. There is treatment for this condition through a vet’s care so that your dog is not in pain. Surgery can be done as soon as possible but other treatments have high success rates such as water treadmills or massages.

According to VCA Hospitals:

Von Willebrand’s disease (vWD) is the most common inherited bleeding disorder of both humans and dogs. It is caused by a deficiency in the amount of a specific protein needed to help platelets (the blood cells used in clotting) stick together and form clots to seal broken blood vessels. The deficient protein is called von Willebrand factor (vWF).

Many dogs with vWD never show outward evidence of having the disease. Others may spontaneously hemorrhage from the nose, vagina, urinary bladder, or oral mucous membranes. Prolonged bleeding after trauma or surgery is a common clinical finding, and bruising or bleeding after a surgical sterilization procedure (spaying or neutering) may be the first time any abnormality is noticed. Females may bleed excessively after giving birth. In affected dogs with uncontrollable bleeding, death may occur.

This is born in some puppies so you would know about it before choosing a dog. Surgery can be used to correct the problem that comes from the hole in the soft or hard palate.

This condition may cause breathing issues in the dog. When choosing a breeder, Make sure the dog has been cleared of this condition.

It is important to be prepared for any of life’s little (or big) emergencies. By having pet insurance, you don’t have to worry over unexpected veterinary expenses or huge bills due to an accident or condition.

Life With a Frenchie

These little dogs bring a lot of joy to their human companions. They’re smart, lively, and aim to please. They are also stubborn and independent thinkers but with care and patience, they’ll make sure to do what makes you happy.

If you plan to get one of your own, consider finding a rescue dog. If you want to go through a breeder, do your research first and make sure that you get a reputable and trustworthy one whose main concern is the dog.