Everything You Need to Know: African Boerboel 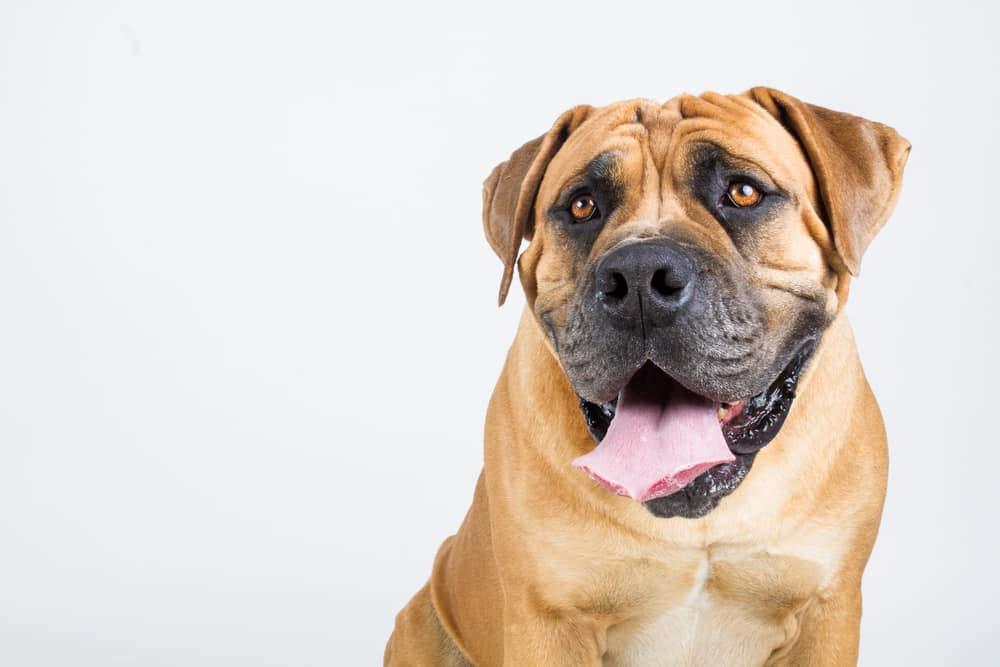 Confident yet calm, intimidating yet family-friendly, the African Boerboel, also known as the African Mastiff, makes a faithful guardian. Their blocky head and thick muscles would make anyone think twice before trespassing on your property or harming children in their stead. And because they have all the tools to do some serious harm, training should start early with this breed. Considering having a Bole at home? Here’s everything else you need to know about this loyal pooch.

With a name that means farmer’s dog in Dutch and Afrikaans, the African Boerboel is a native of South Africa. In the mid-1600s, Dutch, German, French, and British settlers came to Africa, bringing with them large bull and mastiff-type dogs to guard their homestead against predators. The interbreeding of these dogs with indigenous landrace dogs produced the Boer dogs. Further refinements led to the modern Boerboel dog, a powerful mastiff that can flex its muscles enough to ward off big predators, yet sensitive enough to take cues from their owners so that they know when to back off.

Although the specific breeds used to create the Boerboels remains unknown, it is thought that this confident pooch came from a cross breed of bulldogs, mastiffs, terriers, bloodhounds, and staghounds. The breed was first introduced to the world through anthropologist Dr. Carl Semencic through his book, Gladiator Dogs.

This dog breed remains sought after for its strong guarding instinct as well as its calm and stable composure. As long as they are properly trained, regularly exercised, and socialized since its puppyhood, Boerboels are great family dogs. Intelligent and reliable, they’re happiest when they’re given jobs to do that will make use of their strength and agility. They are courageous and willing to fight to the death to protect their own. They stick close to their favorite human and are very territorial so they’re less likely to wander off on their own.

These dogs become well-adjusted and highly trainable with positive reinforcement techniques. Because of their size, the African Boerboels can be intimidating. And that’s why it is vital that an owner should respect its strength yet still assert leadership over it. Forcefully controlling the dog will just backfire on the owner in the long run as it could lead to destructive behaviors.

The African Boerboel is known for its impressive size with its well-developed muscles and strong bones. They have a height of 22-27 inches and can weigh 150-200 lbs, with males considerably bigger than females. Their coat can be various shades of brown, cream, tawny, brindle, and red. Their heads look a bit blocky and their movement conveys power and graceful confidence.

Generally, African Boerboels are a healthy breed with a life expectancy of 9-11 years. However, some dogs, like any other breed, can develop some health issues over time. Common health problems include:

Abnormal development of the hip socket and the elbow joint causes this health issue. This problem is quite common with large dogs and a wide range of potential risk factors are involved, including rapid growth, imbalanced diet, and genetic patterns. Signs of this disease include difficulty in standing up, loss of muscle mass in the affected area, pain, reluctance to climb up the stairs or go on a walk. If you notice these in your dog, it’s best to schedule a visit to the vet immediately.

When the vaginal lining becomes inflamed due to stimulation of estrogen, you will notice a protrusion at the vulva during your dog’s heat cycle. Other symptoms of this problem include reluctance to copulate, vaginal discharge, and pain. As this issue is related to your dog’s estrus cycle, it will most likely resolve without any intervention as the cycle progresses. Spaying your pooch will prevent this.

When your dog’s eyelid rolls outward and looks droopy than usual, there’s a good chance it has a condition called ectropion. Though mostly congenital in origin, there are also other factors that could lead to this including neuromuscular disease, facial nerve paralysis, hypothyroidism, and injury. This condition could lead to conjunctivitis and keratitis as the delicate underlying tissues are exposed. Mild ectropion is treated with ointment while severe cases may require surgical correction.

The opposite of ectropion, this condition happens when the eyelid rolls inward. Entropion will cause eye irritation that could gradually lead to blindness when left untreated. Usual symptoms of this problem are eye inflammation, excessive tears, as well as pus or mucus discharge. In mild cases, artificial tears and antibacterial ointment are used to treat this condition. In severe cases, however, surgical intervention is needed.

Tips for Taking Care of an African Boerboel

Falling in love with this breed already? Here are some tips to help you raise and train a happy and stable African Boerboel.

When choosing a puppy

Make sure you’re buying from registered breeders who can provide health clearances for the puppy’s parents. Check out the parents, if possible. This will give you an idea of how the puppy will turn out. Also, if you already have a dominant dog in the house, it’s best to get a puppy of the opposite gender if you don’t want to play referee to two assertive dogs in the future.

The African Boerboel’s overcoat is short and straight, covering a smooth and shiny undercoat. Although they don’t shed so much, you still have to brush its coat at least once a week with a rubber grooming mitt or a soft-bristle brush to spread natural coat oils evenly and to promote new growth. Boerboels need an occasional bath so they’re very low maintenance in this area. You need to trim its nails regularly since overly long nails could cause pain and impede its leg movement.

Because the Boerboels are an athletic breed, they need a nutritionally-dense diet. You have the consider the financial aspect of owning this kind of dog since not only do they require premium dog food, your pet could also finish lots of it in one go. If you want to forgo commercial feeds and prepare its food yourself, you need to make sure you’re meeting its nutritional requirements to keep up with its growth. To be sure, talk to your veterinarian or a dog nutritionist for advice on the appropriate food for your pooch.

It’s best to train and socialize this kind of dogs when they’re still puppies. When you have kids in the house, it’s ideal to get them involved during training so the dog will get used to having them around. Although this breed is not your typical dog park-type pooch, you still need to socialize it every opportunity you have. Boerboels can be quite accommodating to guests but only those they’re familiar with. First-time visitors have to be introduced to your resident guard dog so it won’t feel threatened and feel the need to protect its space.

African Boerboels thrive best when they’re part of the family. While they could spend the day on guard duty, working on a farm, or preparing for a competition, Boerboels perform best when they’re with their favorite human. Thus, keeping your pet in the backyard for long periods of time without you nearby may lead to boredom and behavioral problems.

Strong, muscular, and assertive, the African Boerboels are not for novice owners. However, if you’ve been with dogs all your life and you can put in the time to train this dog, you’ll find no better guard dog that takes its job seriously. You and your family can feel secure having this loyal pal around.