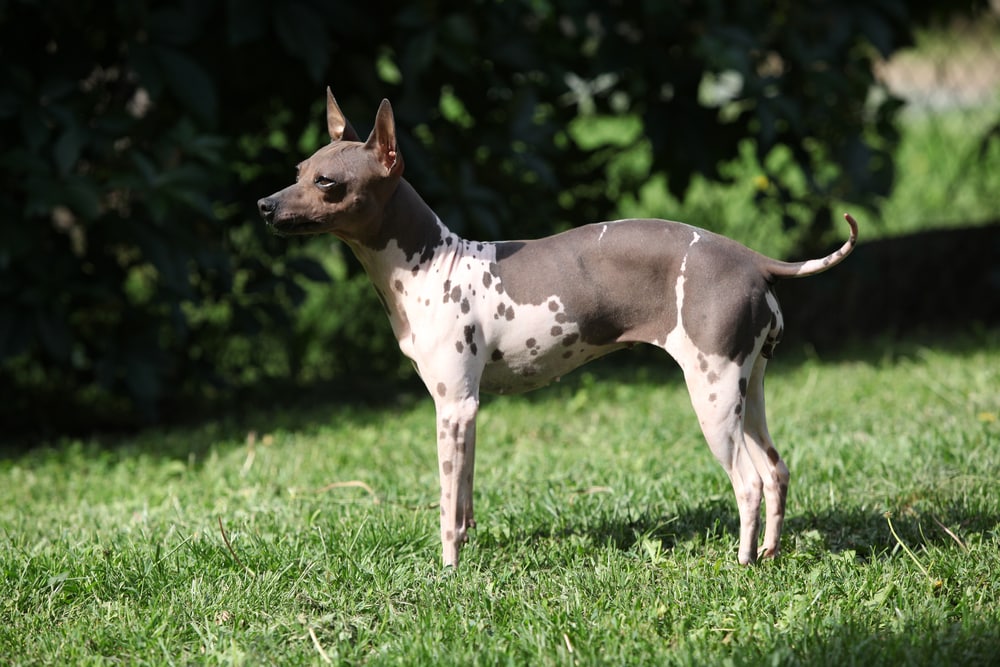 1. Where Did the American Hairless Terrier Come From?

This cute little guy was not crossbred from other Terriers, but actually was a natural occurrence. In 1972, a hairless rat terrier puppy was born in Louisiana. The owners of the litter of puppies gave the hairless puppy to friends of theirs, who, after consulting with several breeders, tried and succeeded in breeding more of the hairless dogs.

The rat terrier has actually been an existing breed since the early 1800s, and while it is possible that hairless puppies might have been born before, it apparently wasn’t until 1972 that an effort was made to breed more of them.

The rat terrier, originally developed in England, was often tasked with tracking down and exterminating disease-carrying vermin, which is where the dog gets its name from. The dog was first brought to America in the late 1800s, where several decades later, the hairless pup appeared.

The first attempts at breeding more of them didn’t produce immediate results. In fact, it actually took about eight years for a set of hairless siblings to be born. Sometime after that, the breeding attempts using these two hairless terriers yielded more results, and the breed of the American Hairless Terrier finally became prominent, although it wasn’t actually recognized officially as part of the Terrier Group by the AKC until 2016. Before then, it was only part of the Miscellaneous Class.

2. The American Hairless Terrier is the First hairless Breed to Come From the United States

While you may have seen other hairless breeds such as the Xoloitzcuintli and the Chinese Crested terriers, the American Hairless Terrier was the first hairless breed to be developed in the United States. Additionally, this particular breed has absolutely no hair on its body whatsoever, while others do possess hair either on the tail or head. Additionally, it is the only hairless breed with full dentition, which is a full set of adult teeth.

3. The American Hairless Terrier is Not Suitable for Hunting

Though it is descended from good hunters, the lack of a coat actually makes the American Hairless Terrier unsuited for hunting. This is because the lack of fur means it has little protection against branches and foliage, and it also requires sunscreen if it were to be left out in the sun for a significant amount of time.

Nonetheless, the American Hairless Terrier still retains its hunting instincts, and so while it cannot necessarily hunt, it is still energetic, agile, and eager to play.

If you already own an American Hairless Terrier you may have noticed something a little unusual about its feet. Its two middle toes are slightly longer than its other toes, and also slightly longer than the same toes on other dog breeds. The longer toes don’t provide the AHT with any extra skills, but do make up part of its uniqueness.

You may have noticed it stated earlier that the American Hairless Terrier was first successfully bred in the late 1970s and early 1980s, but that it wasn’t officially recognized by the AKC as being part of the Terrier Group until 2016. So why such a long wait for this dog breed that actually developed separately thanks to a recessive gene, rather than a result of crossbreeding other hairless breeds?

Part of the reasoning by the AKC is that since the dog did develop from American Kennel Club-registered Rat Terriers, then this dog should have been actually categorized as Rat Terriers as well, rather than a separate breed. However, over time and thanks in part to the development of the American Hairless Terrier Club of America in 2009, the AKC finally recognized it as a separate breed, first categorizing the dog in the Foundation Stock Service in 2011, then the Miscellaneous Class in 2014, and then finally recognizing it as part of the Terrier Group, where it is likely very happy to be.

Like most small dogs that think they are bigger dogs, the American Hairless Terrier can get very upset if it feels its territory is being encroached upon. The breed is very territorial and forms an attachment both to its home and the surrounding area, and the family that adopts it. As such, they do make an excellent watch dog, and due to their hunting instincts, they like to chase other small animals off of what it considers its property.

7. The American Hairless Terrier is Unfortunately Susceptible to Many Health Issues

Because they are so lovable, fun, and excellent family companions, it can be heartbreaking when an American Hairless Terrier is afflicted with a health problem. And, unfortunately, the breed is prone to many health problems, especially if a dog comes from a breeder who is irresponsible with their breeding practices.

Some of the more common health problems the American Hairless Terrier may face include:

While not every health issue is life threatening, treatments can become rather costly, especially more serious health issues. It is a wise idea to purchase pet insurance if you are thinking about adopting an American Hairless Terrier or already own one.

To reduce the risk of many of these health concerns, adopt a dog from a reliable breeder for starters, and then be sure to provide the dog with plenty of exercise and a proper, nutritionally balanced diet.

8. The American Hairless Terrier Comes in Many Colors

A cornucopia of colors make up the palette of this unique and amazing breed. Everything from a single color of black or red to mixed colors of black and white, white and red, and white and blue fawn can be found on these dogs, and many others in between. Additionally, the dog can have a multitude of markings, including tan markings, brindle points, and sable markings, among others.

9. The American Hairless Terrier is Not a Good Swimmer

While many dogs both large and small can swim rather well, the American Hairless Terrier cannot be counted among them. However, that doesn’t mean they won’t try to swim, and so if your yard contains a pool or there is a lake nearby, you will want to exercise caution and keep a watchful eye on your furry friend. Putting a fence around a pool is a good call, and keeping the dog on a leash when walking near lakes or other bodies of water is recommended. The American Hairless Terrier is a quick dog, and can get into a body of water within seconds if you aren’t alert and monitoring the dog closely.

10. The American Hairless Terrier May Be One of the Most Fun Dogs You’ll Ever Know

There’s no doubt about it, these dogs are fun, fun, fun! They are always ready to play and will certainly keep you occupied, so if you are looking for a dog that will spend most of its day sleeping, you’ll definitely want to pick something else!

To care for these dogs it is recommended that you be able to take them for a daily walk or allow them time to run around in the yard. And they do like companionship, so they’ll get annoyed if you aren’t there to play with them for a good portion of time.

Because they are small in size, they’ll also do well in apartments, provided, of course, that they have ample room to run and play in the apartment as well.

They are also rather intelligent, and so while they can be easily trained to be obedient and act as guard dogs, they can also learn quite a few tricks, provided their playful nature doesn’t prove a distracting deterrent.

And lastly, American Hairless Terriers like to dig. So if you let them loose in the yard, be prepared to find some holes, and take care to watch that they aren’t tunneling under any fences!