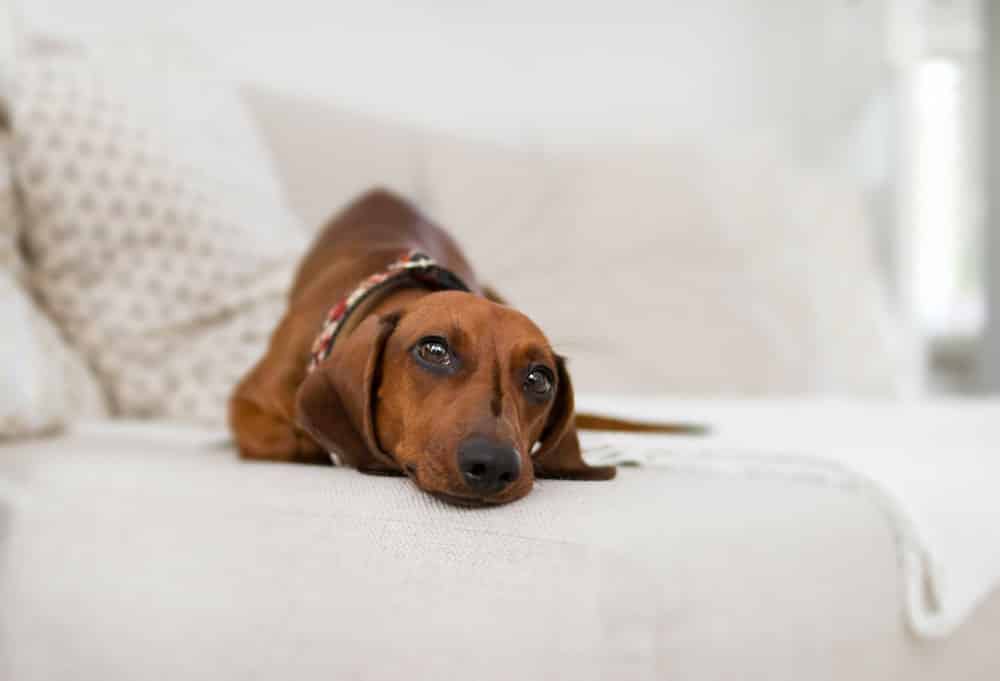 No one would ever question a cat happily gobbling up a can of tuna. But have you ever wondered, “Can dogs eat tuna?” You might be surprised to learn that not only can dogs eat tuna, but they also enjoy it and derive many health benefits from it! However, you shouldn’t just pop open any can of tuna and present it to your canine companion before being aware of some important facts.

While several major brands of dog food focus primarily on meat and meaty flavors, various types of fish are also good for dogs, including tuna. In fact, fish is becoming more popular as an addition to a dog’s regular diet. However, it is first very important to note that raw fish of any kind is a big no-no for dogs.

While several experts might tell you that raw tuna is fine, a dog that eats raw fish has an increased risk of experiencing food poisoning symptoms such as diarrhea, vomiting, and a fever. That’s because raw fish contains certain bacteria that a dog might have an adverse reaction to. Additionally, raw fish also contains an enzyme called thiaminase that can result in a vitamin B1 deficiency for dogs. So, once again, no raw fish! Now back to “can dogs eat tuna?”

Yes, when it’s cooked, and yes, in moderation. And, here’s the important part, yes, when it’s a healthier brand of tuna…

What Type of Tuna is Safe for Dogs to Eat?

Many brands of canned tuna are high in salt, which you want to avoid giving to your dog. Instead, look for brands that have no salt added. The high amounts of salt in some canned tuna brands can cause dehydration in dogs, resulting in excess water intake, which can lead to internal health problems.

You’ll also want to choose cans of tuna that are packed in water rather than oil. The oil can give a dog an upset stomach, and also adds a large helping of extra calories to your dog’s daily diet, which could lead to obesity and other health issues.

Be especially wary of canned tuna that has seasonings such as garlic or any other spices. Dogs have difficulty digesting various spices, and garlic is toxic to dogs and can lead to severe health problems.

The most important concern regarding giving tuna to dogs is the mercury content in tuna. There are several different types of tuna available in the market, some with higher mercury levels than others. The best types of canned tuna to get for your dog are skipjack tuna and albacore tuna. These are smaller types of tuna and contain less mercury than the larger tuna, such as yellowfin and Bluefin.

It should also be noted that although many pet experts are concerned about mercury in tuna, there have been no reported cases of mercury poisoning in dogs. Additionally, researchers have concluded that commercially available dog foods that contain tuna do not contain harmful levels of mercury.

Cooked tuna steaks are also safe for your dog. Baking or broiling the tuna, without any salt or additional seasonings, is the healthiest option for your dog. Dogs don’t require seasonings the way humans do, they’ll happily consume a bland tuna steak without any complaint. Just be sure that the tuna is cooked thoroughly, as undercooked tuna could result in digestive issues.

Also, do not feed the whole steak to your dog, follow the guidelines detailed below for how much tuna is safe to give your dog based on its weight. And be sure to remove any bones from the tuna steak, as the small bones could get lodged in the dog’s throat.

How Much Tuna Can I Feed My Dog?

Additionally, do not give small dogs a whole can of tuna, introduce small amounts of tuna into your dog’s diet, regardless of the canine’s size. Make note if our dog experiences any adverse reactions, as some dogs might be allergic to tuna. Others might just find that it doesn’t agree with them.

If all seems okay, you can give your dog small amounts of tuna on occasion, and you’ll safely limit their sodium and mercury intake.

As a general guideline, you can figure on giving your dog that weighs 20 pounds or more one can of chunk light tuna every 3 weeks, and a can of albacore only once every 10 weeks.

Give one can of chunk light tuna to a medium-sized dog (about 40 pounds) every 9-10 days. Albacore tuna should only be given to your dog once a month.

Larger dogs that weigh 90 pounds or more can receive a can of light tuna every five days, and a can of albacore tuna twice a month.

And the largest dogs that weigh 150 pounds or more can handle getting a can of chunk light tuna once every 3 days, and a can of albacore tuna every 9-10 days.

Can Dogs Eat Tuna When They are Puppies?

It is not recommended that you give any tuna or fish to dogs until they are fully grown. Puppies are still in development, and the digestive and gastrointestinal systems may not yet be able to handle the consumption of tuna or other types of fish. The puppy food you purchase should have all the necessary nutritional benefits, vitamins and minerals your puppy needs to grow.

Why Should I Feed My Dog Tuna?

So, with the inherent dangers in feeding your dog tuna, you are probably wondering, “can dogs eat tuna” after all? Again, moderation is key, and if your dog is able to handle small amounts of tuna on an occasional basis, it can be beneficial to its health.

Tuna and other types of fish are a natural source of protein. If you are seeking to offer your dog natural alternatives to meat-based dog food brands, tuna is a viable option. You can also try feeding your dog tuna if they have indigestion or other health issues as a result of eating poultry based foods.

Many dog foods available on the market today are made with fish as an ingredient for the purpose of feeding dogs that have digestive and stomach sensitivity issues to other types of proteins like chicken and beef. Dog foods that are made with tuna or other types of fish are a good way to provide the much-needed protein to your dogs without the additional fat some other proteins and dog foods contain, making it easier for the dogs to digest.

However, tuna is not suited to being a complete meal replacement, so finding something that your dog can eat on a regular basis is still warranted.

What are the Health Benefits of Tuna for Dogs?

As mentioned above, tuna is high in protein, which is, of course, beneficial for your dog. It is also a lean protein and low in saturated fats, helping your dog to avoid the fat that many meats or meat-based dog foods might contain.

Tuna contains vitamins B3, B6, and B12, which help to boost your dog’s immune system. It also contains Vitamin D and important minerals such as selenium, potassium, magnesium, and phosphorous. These are all beneficial to your dog’s overall health.

Selenium in particular should be noted because it is currently under research due to the fact that it actually serves to bind mercury, helping to protect the body’s cells from possible mercury damage.

Consumption of foods high in omega-3 fatty acids help to improve many aspects of your dog’s health, including:

Ways to Serve Tuna to Your Dog

Aside from cooking up a tuna steak or just giving your dog some tuna from a can, you can offer your dog tuna in other ways to help it get the vital nutrients and health benefits from the fish. You can mix in a bit of tuna with the dog’s regular food, or even just pour some tuna juice over the food you give your dog. Just be sure that you are using brands of tuna that say “no salt added” on the packaging.

You can even mix a bit of tuna with a small amount of mayonnaise. Mayonnaise can be rather high in fat though, so the condiment must also be used in moderation.

If you are wary about giving your dog tuna from a can of tuna you’ve just cooked, you can also look for dog foods that contain tuna as an ingredient. See how your dog reacts to the dog food, and if it enjoys it and shows no reaction to it, you can continue feeding it to your dog on a regular basis.

In conclusion, the additional protein derived from a natural food source such as tuna, as well as the health benefits of tuna for your dogs certainly make it a welcome addition to your dog’s regular diet. But it is important to stick to a strict schedule of moderation, giving your dog tuna only on occasion and in small amounts befitting the size of your dog.

In addition to tuna, you can also supplement your dog’s diet with other types of fish, such as salmon and flounder. These fish do not contain mercury and can provide many of the same nutritional benefits as tuna. You’ll also want to ensure that any fish you give your dog is cooked and devoid of salt and seasonings of any kind, ensuring that your dog maintains a healthy life.