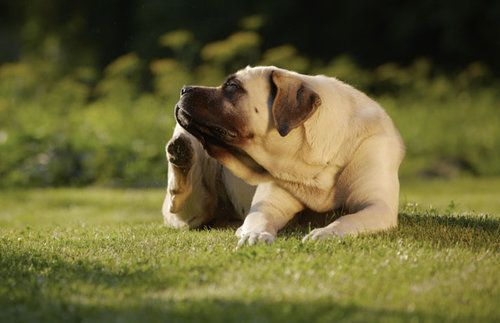 There are more than 2,000 species of fleas worldwide, including 300 species in the United States. Since these tiny parasites easily transport from one location to another, they often impact indoor-only pets like cats and birds, as well as dogs that spend the majority of their time inside.

Although fleas can be problematic at any time of the year, especially in warm, moist environments, their populations typically explode during the spring and summer months. While fleas are often considered a nuisance, often causing dermatologic issues, they are also responsible for transmitting diseases in both animals and humans.

The Dangers Associated with Fleas on Dogs

Small, wingless insects, fleas infest the coats of mammals and plumage of birds. Feeding on the blood of their hosts, cat fleas (which also affect dogs) consume up to 15 times their body weight in blood daily.

Fleas pose a number of health risks to both humans and animals, including allergic reactions, anemia, and infection. They also play a role in spreading diseases like plague and typhus.

Fleas lay eggs on animals that quickly fall off into the areas where pets spend the majority of their time. Once these eggs hatch, they evolve into cocoons before emerging as adult fleas. This means that for every flea an owner finds on their dog, there are at least one hundred immature fleas in their environment. After all, a female cat flea can lay as many as 40 to 50 eggs per day and over 2,000 in her lifetime.

As stated in a 2019 study, published in Parasites & Vectors, variables such as climate change, globalization, and rising levels of pet ownership make the understanding and prevalence of flea-borne pathogens of the utmost importance.

After studying 662 dogs, across 326 practices, it was found that 14.4% of dogs were infested with fleas, many of which tested positive for at least one pathogen.

Tapeworms are another major concern, as larval fleas often feed on the egg packets of a specific type of tapeworm. As the flea matures, the egg may develop and if a dog swallows that flea, the tapeworm may then develop in the dog.

Although these tapeworms are not typically harmful, when left untreated, significant weight loss can occur. Flea management is the most important preventive measure in regard to tapeworms. If a dog is treated for tapeworms but continues living in a flea-infested environment, reinfection will likely occur within as little as two weeks.

Looking for Signs of a Flea Infestation

In order for owners to protect their four-legged companions, it’s critical to understand what to look for in regard to physical signs and symptoms.

As stated above, allergic reactions often occur following flea bites, being the most common cause of itching and scratching. It is the saliva that dogs react to and even after the last flea bites, itching may continue to occur for up to two weeks.

Another telltale sign can be spotted after using a fine-tooth comb. Small black spots that look like dirt are likely flea excrement. Upon shaking these small black dots onto a piece of wet paper towel, in the case of flea waste, they will dissolve, showing red streaks – which is, of course, partially digested blood.

If a dog does have an allergic reaction, unusual red patches may develop on their skin. In more severe cases, hair loss may also occur.

How to Treat Fleas on Dogs

While prevention through regular administration of topical or oral medications is the best way to avoid parasitic infections, particularly during flea season (which varies based on location), once an infestation has occurred, swift measures must be taken.

Controlling fleas is an ongoing process. However, once this process begins, it’s fairly easy to sustain. The very first step will be to kill the fleas on the affected dog in order to eliminate discomfort. There are topical treatments and sprays available, as well as flea pills, including nitenpyram. At this time, a bath is highly recommended.

Some of the treatments available include, but are not limited to:

Once a pet owner has eliminated fleas on their dog, it will be time to focus their attention on the dog’s immediate environment. Start by washing any dog bedding with hot, soapy water and thoroughly vacuum. To increase control, use a vacuum with a rotary beater, as this can remove 15 to 20 percent of the larvae and 32 to 59 percent of the eggs hiding in the carpet.

After vacuuming, it is imperative to dispose of the vacuum bag because both the larvae and eggs will continue to develop and eventually emerge as adult fleas. Insecticides should then be administered and in order to stop flea reproduction, this regimen will need to be repeated at least once a month.

Regularly scheduled check-ups at the vet will ensure that dogs are provided with the preventative shots and medications they need to protect their health – and in many cases, the health of their owners (i.e. tick control in order to prevent Lyme disease).

There are a number of topical and oral canine flea preventives on the market, all of which can be discussed with a veterinarian. These regular annual expenses are covered by certain pet insurance plans, providing peace-of-mind year after year.

Find out more about the benefits of wellness dog insurance, as well as accident and illness coverage here!