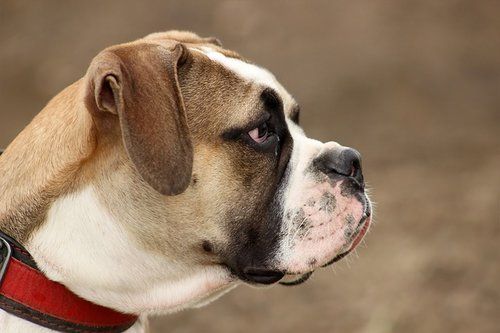 Since these conditions are rare and often require extensive testing in order to reach a definitive diagnosis, affected dogs often need to see a veterinary neurologist and/or ophthalmologist.

The onset of clinical signs related to these disorders ranges from a few months old to 7 years of age. While disorders vary, all NCL’s tend to have two things in common:

Owners will notice neurological warning signs. However, these signs will vary depending on the breed and symptoms of canine NCL often overlap with those present in other neurological disorders.

For example, American bulldogs may showcase uncoordinated movement in the rear, whereas Tibetan Terriers may become more aggressive and less coordinated. NCL-like diseases have been reported in over different breeds, as well as mixed breeds.

Some common symptoms include:

The majority of cases of neuronal ceroid lipofuscinoses in dogs is caused by an inherited autosomal recessive trait.

This gene defect appears to be unique in each breed. Researchers at the University of Missouri-Columbia College of Veterinary Medicine aim to identify the mutation responsible for NCL in each breed.

It is important to note that even if a dog exhibits NCL-like symptoms but is negative of the mutation that causes NCL in that dog’s specific breed, that does not rule out NCL as the cause. Different forms can develop in the same breed or the causative mutation may not yet be identified.

Unfortunately, the prognosis of NCLs in dogs is very poor.

Treatment depends on the form of NCL present and to-date, an effective treatment is available for only one form. As stated in this 2017 review, a Dachshund model is being utilized to investigate possible treatment options, including the use of gene therapies and enzyme replacement.

This was reported in a 2014 study which evaluated the potential of enzyme replacement therapy, administered directly to the cerebrospinal fluid (CSF) of Dachshunds. Starting at approximately 2.5 months of age, recombinant human TPP1 (rhTPP1) was administered every other week. This resulted in delays in disease progression (measured by the delayed onset of neurologic deficits), as well as improved cognitive performance and an increased life span.

Gene therapy is also of great interest. An AAV2-TPP1 gene therapy vector was injected into the CSF of the lateral ventricles of the brain of affected dogs. This resulted in higher levels of TPP1 gene expression, slowing disease progression.

Both of these treatments led to significant delays in the onset of symptoms. However, the condition of these treated dogs did eventually progress to end-stage neurologic disease. Researchers continue to test new options, including injections of bone marrow-derived stem cells.

If your dog is displaying possible neurological symptoms, they may be suffering from one of many conditions. It is imperative to see a veterinarian and potentially a specialist as soon as possible.

Protect your dog from the unexpected today!