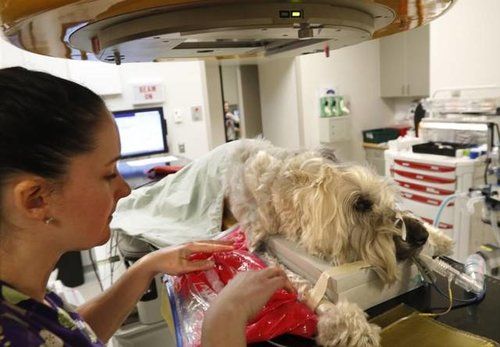 Transitional cell carcinoma (TCC) is a cancer of the transitional epithelial cells of the urinary tract in dogs. Although both male and female dogs could be affected, this type of cancer commonly occurs in older female canines. Development of this cancer could be attributed to genetic factors especially with certain breeds like Scottish Terriers, Beagles, Shetland Sheepdogs, and West Highland White Terriers.

The malignant tumor is usually found in the lower part of the urinary bladder, and could possibly affect the urethra, the duct that drains urine away from the body, as well as the prostate gland of male canines.

Aside from genetic factors, there’s no known cause for this type of cancer. Presumably, repeated or prolonged exposure to carcinogens is a contributing factor. Female dogs are known to be more predisposed to this illness probably because they are not inclined to urine marking behavior. Thus, there’s a good chance they’ll hold their urine for longer periods.

Other contributing factors that would increase a dog’s risk of developing this type of cancer are obesity and living in a house with a herbicide-treated yard.

The tumor can constrict the urethra, obstructing the passage of urine so common symptoms include:

In advanced cases, there could be an absence of urine even when the dog is straining to urinate. As cancer progresses, it could metastasize and affect other organs like lungs, bones, and pelvic lymph nodes.

The symptoms of transitional cell carcinoma in dogs are typical of other more common conditions like a urinary bladder infection and bladder stone. So to diagnose this cancer, several tests are conducted to rule out other possible conditions and confirm a final diagnosis. Some of the tests the dog will have to undergo includes:

A urine sample is taken from the dog in a sterile manner and sent to the lab for an analysis of the chemical composition as well as cells present in the urine. In a bacterial culture, a sterile sample of the urine is plated in a growth medium to isolate and identify possible bacteria in the urine. This will also help the veterinarian determine what type of antibiotic can be used if there’s an infection.

Both these tests will either confirm or rule out an infection. However, it is important to note that even though infection is detected, this does not necessarily rule out TCC since tumors can also be infected. Approximately 30% of dogs with transitional cell carcinoma release tumor cells in the urine so the illness can sometimes be detected through urinalysis alone.

If there’s no infection or if the vet has reason to suspect bladder stone or other condition other than infection, he may request for a radiograph or an ultrasound. Ultrasound generally provides better visuals on the bladder and the surrounding tissues but it costs more than a radiograph. A radiograph should be enough to confirm the presence of urinary bladder stones.

Roughly 85% of dogs with transitional cell carcinoma exhibit the BRAF mutation. This non-invasive technique uses a urine sample from the dog to diagnose this type of tumor even in its early stages when the dog is not showing any symptoms and no tumor is detected on any imaging test. Although this is very helpful in the early detection of TCC particularly in predisposed breeds, it is important to note that 15% of dogs with TCC will test negative for BRAF mutation. Thus, further diagnostic tests might be necessary.

If a tumor is confirmed, the growth will have to be analyzed further through a biopsy. To perform this, a small tissue sample is aspirated or removed using a sharp urinary catheter, cystoscopy (a small camera and instrument are inserted into the urinary tract to get a sample), or even surgery. The tissue sample is sent to the laboratory for evaluation of the mass. The biopsy result will also reveal the extent of TCC—whether it remained localized or it has spread to other organs.

Once there’s a diagnosis of transitional cell carcinoma, treatment hugely depends on the stage of the disease. Unlike other cancer types, surgery is often not an option with transitional cell carcinoma because it’s almost impossible to completely excise the tumor. And even when the tumor is removed, there’s a high possibility of regrowth. In cases where there’s substantial obstruction, a stent is surgically placed to keep the affected ducts open. Other possible treatment options are:

Non-steroidal anti-inflammatory drugs (NSAIDs) are often used to treat the pain but a study shows that some NSAIDs, particularly piroxicam, do not just relieve the pain, but also prevent the progression of cancer.

Chemotherapy drugs may also be used in addition to NSAIDs. This is administered intravenously to inhibit the growth of the existing tumor and prevent its metastasis to other organs. Common drugs used for chemotherapy include mitoxantrone, gemcitabine, and carboplatin. Fortunately, dogs experience less of the adverse effects that’s often associated with chemotherapy in humans.

In cases where cancer has already metastasized to the bone, lymph node, or prostate, radiation therapy may be employed to slow down or prevent the spread of cancer cells. This is often done with the dog under general anesthesia because the pet has to be completely still so that the radiation can be administered to targeted organs precisely.

Complete Removal of the Bladder

In extreme cases, pet owners may also opt to have the bladder surgically removed completely. This is a drastic procedure and pet owners should be prepared to handle the aftereffect of this surgery, including incontinence. Instead of being stored in the urinary bladder, urine will be channeled to the intestine and discharged through the rectum. Or in some instances, the ureter (the small tubes that transport urine away from the kidney) may be connected directly to the vagina, resulting in permanent incontinence.

In the past, TCC has a very poor prognosis that dogs diagnosed with it are often euthanized. Fortunately, with extensive studies, this cancer is now considered treatable although prognosis still largely depends on the growth rate of the tumor and whether or not cancer has metastasized to other organs. A combination of treatment protocols is proven to be the most effective approach to treating TCC. For instance, dogs treated with piroxicam (NSAIDs) and mitoxantrone (chemotherapy) has a remission rate of 35%.

Dogs diagnosed with transitional cell carcinoma have a high risk of developing a bacterial infection. Thus, in addition to regular cystography, ultrasound, or x-ray to assess the efficacy of the treatment, they also have to be monitored for infection through urinalysis and bacterial culture.

Although there is no known cause for transitional cell carcinoma in dogs, pet owners can still be proactive and limit their dogs’ exposure to carcinogens. Further, those who own dogs that are predisposed to this illness can also opt to have their pet screened for TCC. The screening program for TCC is done every six months.