American Bulldog: Everything You Need to Know 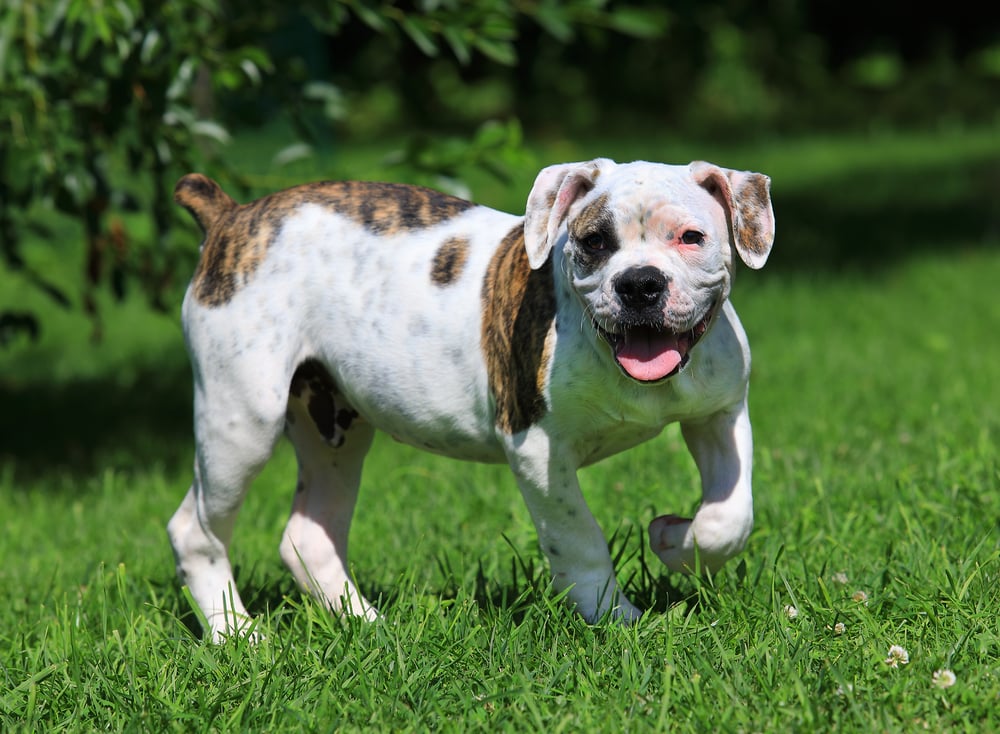 The American bulldog is a strong, muscular, protective ball of unconditional love, playfulness, loyalty and unwavering devotion. It is an exceptional breed that once teetered on the edge of extinction.

The American bulldog descended from mastiffs brought to Europe by nomads in 1066. This was during the reign of Caesar in the Roman Empire. Europe was already populated with an extremely formidable strain of mastiff called Alaunts. These dogs came to Europe with the Normans around 400 AD.

Breeding the Alaunt mastiffs with those introduced in 1066 produced a unique type of dog. These dogs had a “lock-jaw grip” not seen before. They dogs became known as “bulldogs” because of their ability to catch and hand onto the nose, cheek, or throat of any large animal. They became the dog of choice in the 15th century for the popular blood sport of “bull baiting.”

In bull baiting, a pack of trained dogs were set against a tethered bull. The dogs would attack the bull’s nose or throat and hold on until it pulled the bull to the ground, or the bull killed the dog.

The aggressive nature bred into the dogs also made them useful to farmers. They would herd the animals, catch errant horses and cattle, and bring down boar and other wild beasts that threatened the farm.

The early bulldog breed came to America in the 17th century. Colonial America used the dogs in baiting contests with bears, bulls and buffalo. Passage of the Cruelty to Animals Act in the United States in 1835 banned this sort of blood sport.

They were also used as a working breed. Butchers used bulldogs to control the animals slated for slaughter. As baiting sports diminished in popularity, farmers began using the dogs as herding and catching dogs, mostly in the southeastern United States.

Bulldogs worked on plantations and ranches to help in catching and controlling cattle, horses and hogs. They were also great protection for their owners, personally and as property protectors.

Although the bulldogs made loving and submissive pets, they were nearly extinct by the end of World War II.

Modern American bulldogs can trace their roots to four strains.

The bulldog of today wasn’t known by its official “American bulldog” name until the 1980s. Mainly a product of breeders in the South, the American bulldog was also called the “English White” because of their coloring. Some referred to them as “Alabama bulldogs” or just “Southern bulldogs.”

They weren’t called bulldogs because of their looks, however. It was their ability to catch and hold rough cattle, including the ornery Brahma bulls, for their owners that earned the name “bulldog.”

American bulldogs often find themselves victims of mistaken identity. Because of their similarity in physical appearance, American bulldogs are frequently confused with American Pitbull terriers. They are actually different breeds, though they do share some common ancestry.

American bulldogs are members of the mastiff group of canines while American Pitbull terriers belong to the terrier group. How are they similar? What are their differences?

American bulldogs were not bred to be simple household pets. They are an active breed that requires exercise and mental stimulation. These dogs need regular opportunities for venting their energy and engaging in interesting activities to keep their minds stimulated.

American bulldogs like activities such as running, hiking, biking, and swimming. They enjoy playing tug-of-war and running obstacle courses. They’ll enjoy playing fetch with you, jumping and racing with the children. Your American bulldog needs daily exercise for at least an hour if he/she doesn’t have access to a large, enclosed yard in which to play.

A bored American bulldog can be a wrecking ball in your house and yard. When they aren’t getting the stimulation they need, they can become rambunctious. This is usually manifested by destructive chewing and excessive barking.

American bulldogs have historically been working dogs with a reputation for versatility. They are intelligent, allowing them to learn a variety of things. They are also staunchly independent. Your American bulldog can be dominant, obstinate and willful. Their first tendency is to be the boss. They will test you to see if you can make them do what they don’t want to do.

You don’t want your American bulldog ruling the roost. Make certain you are always consistent in your expectations, firm in your handling of the dog, and let them know you always mean what you say. Once your dog understands his or her place in your family “pack,” you’ll have a loving, loyal pet whose devotion will never waver.

It is important to remember that many American bulldogs will not get along well with another dog of the same sex. They may view this dog as a threat to their station in the family “pack.” The instincts of these dogs are strong, and they will chase fleeing animals. They don’t generally tolerate cats well.

American bulldogs were initially bred as working dogs and they need a diet that meets the requirements of a busy lifestyle. Most pet owners opt for dry dog food, while some choose to feed their pet raw foot or cook their pet’s food themselves. The American bulldog will be happy on any of these diets, but most agree that you should check with your veterinarian to make certain your pet is getting the essential nutrients needed.

High-quality dry food is usually a good choice. The American bulldog does well on formulas designed for active dogs. On average, feeding your dog about four cups of food each day is sufficient. Be sure to check the manufacturer’s recommendations to prevent overfeeding, which can lead to obesity and myriad preventable health problems.

American bulldogs tend to be healthy, sturdy animals. But they are not without potential health difficulties. The most prevalent health concern for these dogs is canine hip dysplasia (CHD.) This condition results when the femur, or thigh, bone doesn’t fit properly into the hip joint socket. This causes pain along with difficulty standing and walking. If not properly treated, CHD can progress to degenerative joint disease.

Other health problems that may show up in your American bulldog include the following:

The American bulldog’s short coat sheds more than you’d think. They do shed regularly, making brushing regularly a good idea. A bristle brush or a rubber mitt works equally well as a grooming tool. Brushing your dog outside once a week is a usually recommended. This helps keep your dog’s coat shiny and help decrease the amount of hair accumulating in your home.

American bulldogs don’t need bathing on a regular schedule. They only need bathing when they’ve gotten muddy, have played in the ocean’s salt water, or have taken a dip in the chlorine-maintained pool.

Toenail trimming is a must for your bulldog. It’s recommended that you check the dog’s nails each week and clip them when needed to prevent overgrowth. You can find animal nail clippers at most pet stores. Make certain to avoid cutting into the quick when trimming the nails.

He/she may not like it but you may also need to clear your American bulldog’s ears from time to time. This will prevent bacterial infections, allergies and help any wounds or injuries heal. To clean the ears, use baby oil and a cotton ball. Don’t clean too far down into the ear, as this can damage the ear canal. Gently wipe around the outer area of the ear.

If your bulldog is shaking its head often or scratching its ears, you’ll need to have your vet check it for an ear infection.

American bulldogs are protective by nature. These instincts can surface when strangers come around. When training your dog, it is imperative that he/she is frequently around friendly people. This is how they learn to recognize “good guys” by the way they behave toward the dog. Once they’ve learned this, they are intelligent enough to recognize the difference when someone acts in an abnormal way toward you, your family or your property.

Without proper training in socialization, the American bulldog may be suspicious of everyone, regardless of the person’s intentions.

When it comes time to train your American bulldog, prepare yourself. If you’re not ready to tend to the energy level and activity needs of your dog, it will use that energy on things you don’t want, such as shoes, table legs and other furniture. The recommended amount of daily attention is one hour devoted to your dog.

Training should begin early for this breed. American bulldogs don’t respond well to a heavy-handed or harsh training approach. Keep your training techniques firm but fair, consistent and patient. This is the attitude that works best with this breed.

The level of training requirements for American bulldogs is moderately high. These bulldogs don’t do well with self-discipline, meaning they will need a good deal of attention and time. Because of their high intelligence and their level of confidence in their own abilities, they may easily find themselves in trouble, even becoming inappropriately protective. These potential issues are easily resolved with proper care, attention and training.

Housebreaking your American bulldog needs to start as soon as possible. Upon obtaining your pet, begin immediately to create a daily routine. This can help prevent urination accidents that can happen when a new dog, especially a puppy, comes into your home.

Set a consistent routine for every day of the week. Take your dog outside before you leave for work, then again when you get home from work. Take him/her out once more before bedtime. This is how you can help your dog learn control during the times when you’re not home.

Establishing a daily routine will also help make your American bulldog feel more comfortable in their surroundings and when interacting with people. Though it will vary by situation and individual dogs, developing a routine may take up to six months. Once you’ve trained your dog, you’ll need to maintain the routine to keep your dog feeling secure and happy.

The breed was originally bred for working and fighting. But the American bulldog of today is nothing more than a big old soft fur baby at heart. Households across North America and around the world include these bulldogs as beloved companions. An American bulldog will watch over you and your family all day and all night, work his tail off if you need him to, or be just as content to spend the day curled up on the couch for cuddles with you.

These dogs are active, friendly and loving. They fit into families of all shapes and sizes. They are an active, intelligent breed that does require a commitment from their owners. You have to be able to assert yourself as the leader of the “pack” to keep a handle on this bouncy, rambunctious breed.

An American bulldog with love, protect and guard his family with all his heart and soul. He’ll give his life for his family if needed. A more devoted fur baby is almost impossible to find. Welcoming an American bulldog into your home is a long-term commitment that pays dividends in unconditional love, loyalty and slobbery kisses.