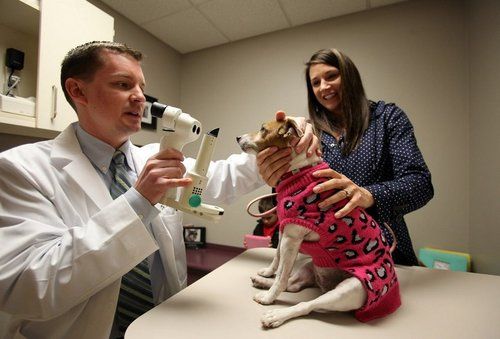 Entropion in dogs is a disorder wherein the eyelids roll inward. As a result, the fur and eyelashes come in contact with the eyeball, causing pain, irritation, perforations, infection, and corneal ulcers. If left untreated, it could lead to vision impairment or loss of an eye.

Types of Entropion in Dogs

Generally, entropion can be categorized into three different types: hereditary or genetic, spastic, and acquired.

Hereditary or genetic. This is the most common type of entropion in dogs and the disorder is usually present at birth. Breeds that are susceptible to this eye disorder are those that have extra skin folds like the Bulldog and Chow Chow.

Acquired. This type of entropion usually occurs in the later stages of the dog’s life. This is brought about by changes in its eye anatomy usually due to other eye issues. For instance, severe glaucoma in dogs could cause the eye globe to shrink and this could lead to the rolling of the eyelid inward. Dogs with weak eye muscles could also develop entropion.

Dog Breeds that are Predisposed to Entropion

Dog breeds with heavy facial folds are susceptible to this issue. Aside from that, breeds that are predisposed to eye conditions like uveitis and glaucoma are more likely to develop entropion. Specifically, dog owners should be more mindful with the following dog breeds:

Signs and Symptoms of Entropion in Dogs

Some of the common symptoms of entropion include:

Dog owners will also notice behavioral changes like their pet always shutting its eyes close, constantly pawing its eyes, or the dog may appear depressed and lethargic.

Since entropion in dogs are either congenital or occurs naturally with aging and other eye problems, it is hard to prevent. However, dog owners can help reduce the risk of injury-related entropion by providing their pet with protective eyewear when engaged in an activity that could injure the eyes. Similarly, dog owners must be mindful of eye problems in their early stages and have them checked by the veterinarian. The sooner those eye issues are corrected, the lesser the risk for the pet to suffer from complications like entropion.

Entropion can be easily diagnosed through an ocular exam. The veterinarian usually administers anesthetic eye drops to relieve the dog of discomfort during the eye exam. Aside from checking the extent of entropion, the veterinarian will also check for possible trauma or an underlying eye condition that could have caused the entropion.

If corneal abrasion or ulcer is suspected, the veterinarian will most likely perform a fluorescein test. To do this, a drop of fluorescein dye is placed on the cornea. The dye will turn green and it will stick to the damaged part of the cornea, allowing the vet to see the extent of the problem.

Additionally, a Schirmer tear test (STT), a common diagnostic test to assess ophthalmic health by measuring basal (tears that lubricate the cornea) and reflexive (tears produced in the presence of an irritant) tear production in non-anesthetized dogs. To perform this test, an STT strip is inserted into the lower eyelid, in contact with the cornea and left there for exactly one minute. After a minute, the veterinarian will check the amount of tears produced using the gradation on the strip.

Treatment is largely dependent on the type of entropion. For spastic entropion, the condition is usually managed using topical ointment to relieve the pain and discomfort. This relief is just momentary so addressing the underlying condition—muscle spasm due to corneal ulcer or injury—is necessary to prevent entropion from recurring permanently.

Similarly, treatment for acquired entropion involves addressing the eye issues that could be causing the problem. In general, this type of entropion is harder to treat especially if it involves end-stage eye disease.

For hereditary entropion, eyelid surgery is deemed as the only permanent solution. In mild cases, especially in puppies, the veterinarian may employ stop-gap measures to reduce discomfort. The veterinarian may prescribe eye drops or ointment to protect the eyes and relieve the pain and irritation. Aside from this, the vet may also perform a temporary eyelid tacking procedure.

This is usually done in puppies born with entropion. The vet will stitch the eyelids in its proper position to keep it from rolling inwards. This is a temporary intervention to prevent the entropion from causing further damage to the eyes. This measure also allows ample time for the dog to mature and develop its permanent head conformation. Sometimes, this procedure will be sufficient since entropion in puppies goes away on its own. Other times, the issue persists so further surgery is needed once the dog matures to permanently treat the disorder.

Also known as eyelid surgery or Hotz-Celsus surgery, this procedure is done by a veterinary ophthalmologist. The dog will have to be under general anesthesia for this procedure. To perform this, the surgeon will remove a piece of tissue from the affected eyelid. Once removed, the two sides of the remaining tissues in the eyelids are stitched back, effectively pulling the eyelids outward. The dog has to be more than 6 months of age before this surgery can be performed. While most blepharoplasty is permanent, younger dogs may have to undergo additional surgery to fine-tune the correction.

This procedure is mostly performed in brachycephalic breeds as this type of dog usually develops entropion at the medial canthus of the eyelid or the part that’s near the nose because of these dogs’ unique features (flat face, short nose, large ocular globes that protrude out of shallow orbital cavity). To correct the entropion, the opening of the eyes is made smaller by stitching the medial canthus, fusing a small portion of the upper and lower eyelids. This is done to prevent the eyelids, along with the eyelashes and fur, from irritating the cornea.

In rare cases, large dog breeds like Great Danes, Mastiff, and St. Bernards develop a combination of entropion-ectropion. This is commonly known as “diamond eyes”, a condition where the lateral and medial part of the dog’s eyelids roll inward (entropion) while the center part rolls outward (ectropion). To treat this condition, the veterinary ophthalmologist will most likely employ a number of blepharoplasty procedures to permanently correct “diamond eyes” in dogs.

Aside from these surgical procedures, if the dog has already developed corneal ulcer due to entropion, the ophthalmologist may also prescribe therapeutic soft contact lenses to treat corneal damage, along with other medications like antibiotics, non-steroidal anti-inflammatory medication, or atropine drops. In severe cases, surgery may be necessary to perform a corneal graft or to remove dead tissues.

Although the surgical procedures to treat entropion are relatively safer, there are possible complications that could arise.

Under-correction. This occurs when not enough tissues are removed from the eyelids so the dog may still exhibit a mild case of entropion. A second surgery might be needed to correct this if it’s still causing eye problems for the dog.

Overcorrection. This occurs when tissue removal is overdone so that the dog’s eyelids droop.

Right after surgery, the eyelids may look overcorrected a bit but this is due to slight inflammation and swelling. Given enough time to heal, the eyelids will tighten and should look normal. That’s when the ophthalmologist can assess if there’s a complication.

Post-operatively, the dog will be required to wear an Elizabethan collar until the wound has healed and the sutures are removed. Dog owners will be given a set of instructions, which may include prescribed medications and ointment, compresses to the eyes, and follow-up appointments. Following through these will vastly help hasten the recovery process.

Additionally, the dog will display high sensitivity to light so it has to be kept safe indoors and closely supervised when it goes outdoors to eliminate risks of injury.

The prognosis following the surgical procedure for entropion in dogs is generally good as long as it’s done properly and at the appropriate time of a dog’s life. The success rate of surgery is very high, at 90-95%, and recurrence is rare.

Entropion, when addressed as soon as possible, can be corrected without any major adverse effect on the dog’s quality of life. However, with the genetic nature of most cases of entropion, it is the pet owner’s responsibility to prevent affected dogs from breeding by spaying or neutering their pets. This way, the genetic defect is not passed onto future generations of puppies.