An Essential Guide to the Alaskan Klee Kai 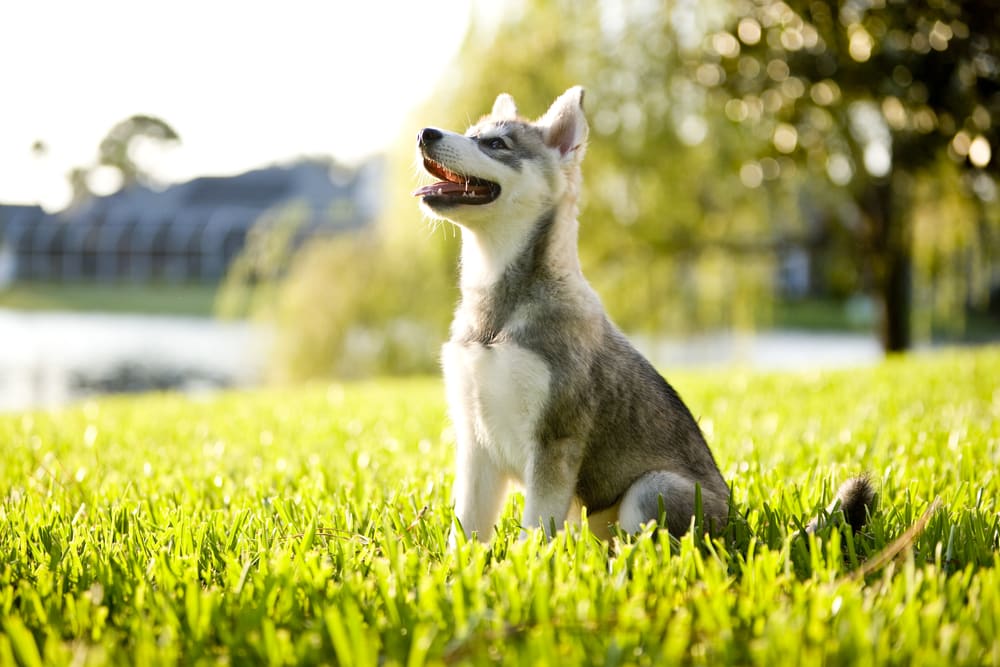 The Alaskan Klee Kai may look like a Husky at first glance, but look a little closer and you’ll notice some differences. This energetic breed could be considered a “Mini Husky” at just 5-22 pounds, and comes in several colors. Can a petite northern breed friend lighten up your life? Keep reading to find out all about the Alaskan Klee Kai.

This adorable and spunky breed was first developed in Wasilla, Alaska by Linda S. Spurlin in the 1970s and 1980s. She had traveled to Oklahoma and found a tiny husky that was just 17 pounds. The couple thought the pup was just so adorable and unique that they took it home with them to Alaska. She thought the dog was so different that she wanted to try and breed it to create more. On a stroke of chance, her brother-in-law had also started breeding smaller huskies around that time, so Linda had stock to create a “mini-husky” breed.

It took a lot of trial-and-error attempts, but once she succeeded, word of the tiny cuties spread far and wide! Linda came up with the name Klee Kai, meaning “small dog” in the Eskimo language, as she wanted to honor the dog’s Alaskan Husky origins. Starting in 1988, the breed was in demand. According to Linda, there was a flood of letters, phone calls and even reporters from various news outlets. Plus, tourists came in droves to her little compound to meet the petite dogs. At the time, Ms. Spurlin was the only source for the breed. She would interview each candidate carefully, because she wanted to make sure the precious pups went only to homes that would treat them well, love them and train them properly.

Her ultimate goal for the breed was to create an adorable companion, but eventually, lovers of the breed did want to use it in dog shows. Soon enough, various organizations including the American Kennel Club, the United Kennel Club and the American Rare Breed Association recognized the breed for showing. Additionally, The Alaskan Klee Kai Association of America was created to celebrate this breed specifically.

The beautiful dogs come in several different sizes between 13 and 17 inches tall. As you can see from the chart below, anything over 17 inches tall is considered a breed fault and won’t be able to show.

Miniature: Over 13 inches to 15 inches tall.

There are three officially recognized color variations in the Alaskan Klee Kai breed. Most dogs have the typical Husky color pattern with a white muzzle, neck and belly, and color on the back, tail and head around the ears. Some dogs have cute “mask” markings with coloring around the eyes. There are all white Klee Kai dogs but they are considered a breed fault and can’t be shown. The qualified colors are black with white, gray with white or red with white. The red can be a cinnamon or auburn color.

Like full size huskies, Klee Kais have a double coat that makes them extremely hearty in extreme weather conditions. It helps to keep them cool in warmer weather and warm in cold temperatures. It also keeps them dry and rain or snow conditions. As they are descended from a northern breed, they do best in cooler climates.

Klee Kais can have both a standard coat or a longer full coat and still be considered a member of the official breed.

Many believe that Alaskan Klee Kais will behave very similarly to their wily, social and lovable Husky counterparts. While the two breeds have a similar look and several ancestors in common, some aspects of their personalities are polar opposites. According to the breed’s creator, Linda S. Spurlin, a dog’s temperament is intensely affected by how the owner treats it, making it hard to generalize the personality of an entire breed. However, there are several traits found in many Klee Kai dogs.

Alaskan Huskies were bred to be good snugglers for humans, so they love to be around people. However, Klee Kais are typically much more wary dogs, especially when it comes to strangers. Some may even describe their Klee Kai as skittish or nervous. Due to their shy nature, early and continuous socialization around all different types of people is important with this breed.

However, like their sibling breed, they are extremely smart, energetic and have a strong prey drive. You should always keep your Klee Kai on a leash when out and about because it will definitely go after the next delicious snack that comes along whether that’s a human friend with a hot dog in hand or a nice looking squirrel.

Another similarity to the husky personality is their need for stimulation. They are incredibly smart and do well with boundaries and obedience training. However, if left to their own devices for too long without any stimulation or exercise, they will definitely get into trouble due to their curiosity and intelligence.

Like other northern breeds, Klee Kais love to howl alongside you, but they do not bark much. They can also make vocalizations that sound a bit like talking, and some may even try to mimic what you are saying as you may have seen in viral internet videos starring full-size huskies.

Alaskan Klee Kai dogs do shed throughout the year, and fully “blow their coat” twice per year. This may sound like a furry nightmare but due to the small size of the dog, it’s actually quite easy to clean up.

Though it is a small companion dog, Klee Kais are not great apartment dwellers. This is simply because they need a lot of activity and do best in an area where they can be let out into a yard and taken for frequent walks and trips to the dog park. They are also a bit high energy for a small space, and can get bored easily when limited to small surroundings.

They also may not be the best for first-time dog owners because of their skittish personalities, strong prey drive and need for obedience training. Like some of the other northern breeds, they are considered a great breed for a more experienced dog owner who is ready to take on the challenge of an intelligent and energetic pup.

The Klee Kai can live for up to 16 years, which is similar to other northern breeds. Make sure to keep this length of time in mind when planning to get an Alaskan Klee Kai dog.

This dog breed can be good with kids, as long as they have been around children from a young age, and as long as the particular children are pleasant to the dog. They won’t easily tolerate tail pulling or other rude behavior. So, it is best to watch young children around a Klee Kai to ensure that proper socialization and learning happens for both the child and the dog.

When it comes to other dogs, the Alaskan Klee Kai is not the best, but it is also not the worst. Make sure to socialize your dog with other canines from an early age if you wish to have a multiple dog household. Taking them to the dog park is a great way to do this. You can also visit with other dog-owning friends.

How to Care for an Alaskan Klee Kai

Their temperament makes the coat easy to care for. They enjoy being clean so they often spend hours each day grooming themselves, leaving little for owners to do. They hardly ever need a bath!

It is not recommended to shave your Klee Kai unless needed for a medical reason. This is because they need both layers of their coat to keep them cool in the summer and warm in the winter. Shaving may actually over expose them to the sun or make them too hot in warmer temperatures.

As this is a fairly new breed, some genetic health problems have yet to be discovered and others are just emerging. If you own a Klee Kai dog, be sure to follow news about the breed to learn about any new developments in this area. At this time, health problems to be aware of in the breed include liver problems, thyroid issues, kneecap dislocation, retained testicles, thickening of the uterus lining and factor VII deficiency, a blood disorder. This breed can also develop cataracts at an earlier age than others. Take the regular precautions like taking your dog to the vet at the recommended interval, following your vet’s instructions for care and bringing your dog to the vet when something seems off.

Klee Kais are not prone to weight gain because they exercise frequently. However, they do need the proper nutrition to keep them going strong through all their activity. It is best to consult with your vet to figure out their appropriate food for your dog’s energy levels and age.

This breed thrives with obedience training because they are smart and want to please you. They will learn easily and will get into less trouble when they are feeling mischievous. You can train the dog to perform advanced tricks, and many enjoy performing in agility courses as it puts together their two favorite things: getting exercise and pleasing their owners.

How the Alaskan Klee Kai Differs From Huskies

The main difference between the Alaskan Klee Kai and the Alaskan Husky is the size. Huskies are up to 26 inches tall and can weigh up to 60 pounds, while the Klee Kai weighs up to 22 pounds and can only be 17 inches tall. While huskies love people and can be quite social with all different types of humans, the Klee Kai is very shy and prefers a routine. Huskies are one of the few breeds that enjoys changes in routines due to their adventurous nature and intelligence. However, since they are a bit more nervous, Klee Kais probably do better with a routine that doesn’t keep them guessing what is going to happen next. Both breeds would not do well in apartment living due to their energetic nature and tendency to get into mischief if they get bored or haven’t been exercised enough.

More than 30 years after the inception of the breed, there are many reputable Alaskan Klee Kai breeders all across the nation. Purchasing a dog from one of these breeders is much different than getting a dog from a “puppy mill.” Official Klee Kai breeders must abide by the terms of ethics set by both the American Kennel Club and the United Kennel Club, which prevents them from performing harmful behavior and keeps the traits of the breed strong. It also helps to keep genetic health problems at bay. Additionally, it ensure that your Klee Kai will have the proper pedigree as an official Alaskan Klee Kai dog.

However, if you are not very particular about the official breed factors and just want a cute Klee Kai, then you can adopt one! There are official Klee Kai rescues, like the Alaskan Klee Kai National Rescue, that allow you to give a forever home to a Klee Kai in need. However, you should be aware that these dogs are typically treasured by their owners so finding one to adopt may take some time.

Is a Klee Kai Cutie In Your Future?

Now that you know everything there is to know about the Alaskan Klee Kai breed, you can make an informed decision about whether or not you want one of these tiny Huskies to be your next furry companion. Do you already own an energetic Klee Kai? Tell us about their funny antics in the comments below!