» Blog » Other Pet Topics » Landseer: Everything You Need to Know

Landseer: Everything You Need to Know 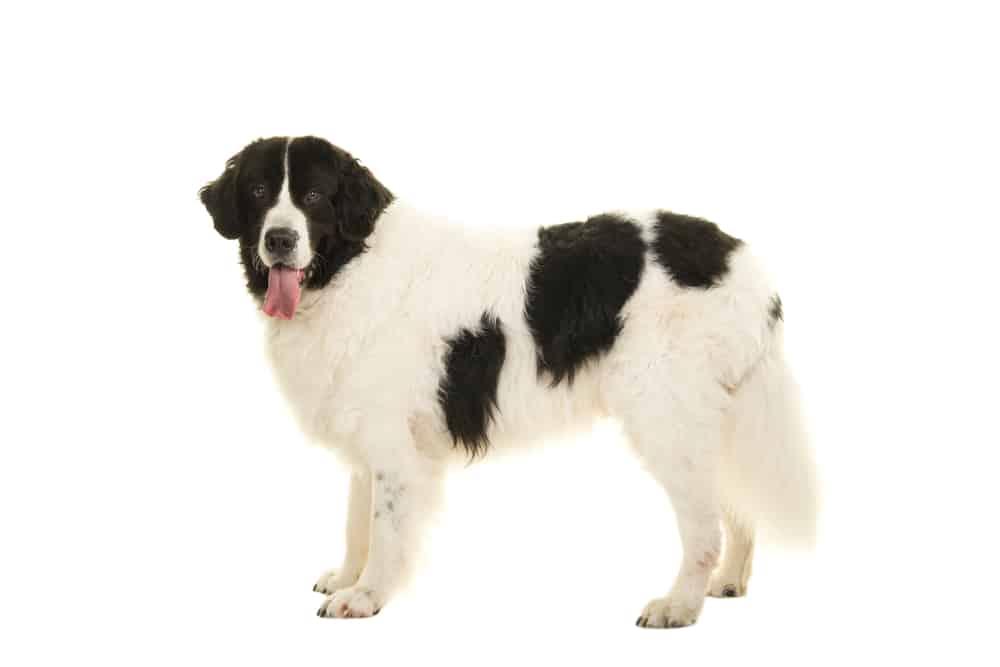 As you might have guessed, the breed has its origins in the Canadian province of Newfoundland and Labrador (coincidentally, another famous breed, the Labrador Retriever, also originated in Newfoundland, despite the name) where it was bred by fishermen for use as a work dog. At some point in the 1800’s, the breed made its way to the UK and to the US, where it has remained a popular pet choice even as its use as a work dog declined.  You may be wondering where its interesting name comes from. The Landseer is perhaps the only dog breed named after an artist, in this case the English painter Edwin Landseer who painted several famous portraits of the breed in the 1800’s. His most famous painting was of a Landseer who was believed to have saved several people from drowning, leading to his membership in the Royal Humane Society.

As with most giant breeds, the Landseer’s life expectancy is slightly shorter than other breeds. Their average lifespan is 8-10 years.

Females will typically give birth to 4-12 puppies, on average.

Aside from maritime heroics, the breed was a favorite subject for Landseer and other artists because of their noble and distinctive appearance. Landseers grow to be quite large, with males averaging 130-150 pounds and 28-31 inches in height; females averaging 99-120 pounds and 26-28 inches in height. They have muscular builds, broad chests, and large heads and paws. As noted, Landseers have a distinctive black and white color pattern, being mostly white with patches of black typically on the face, back, and tail. They have long, thick, somewhat shaggy coats. This served them well when they were wading into the cold waters of Newfoundland centuries ago. They have medium-length ears that hang down and long, typically straight tails.

The Landseer is the definition of a “gentle giant”. Despite their large size, which could easily be intimidating, they have a very gentle disposition. They are known for being friendly and loyal. That loyalty also makes them protective, and with their large size they fit the role of protector well. Their natural demeanor, however, is easygoing and loving. This makes them excellent pets, including for families with small children and other pets. Typically, the biggest concern with the breed is that, due to their sheer size, they may occasionally inadvertently knock over a small child.

Due to their longer coat, Landseers can occasionally shed moderate to large amounts of fur, particularly in the Spring and Fall. The best way to minimize this is to brush them regularly, once a day if possible, to remove excess fur. The occasional bath will help with this as well, but they typically do not require regular bathing. The Landseer is known to drool, but not as much as other large breeds such as the St. Bernard. The best way to keep drool from getting where you don’t want it is by keeping an eye on your Landseer’s mouth area and giving it an occasional wipe as needed. As with any dog, especially those with floppy ears, they can become prone to ear infections. The best way to avoid this is by periodically removing any debris or irritants by gently wiping the inside surface of their ear flaps with a cotton ball or pad. You’ll also want to periodically trim their nails to avoid them getting too long. This is especially important for active dogs, as excessively long nails can impede their ability to be active and can cause pain.

As with most large breeds, the Landseer can be susceptible to hip dysplasia and other joint problems due to their massive weight. This becomes particularly true as the dog ages. The best strategy is to look out for any issues your Landseer has with mobility: trouble walking, running, getting up and down stairs, standing up from a lying position, etc. Other helpful tips include not overfeeding your Landseer and making sure they get enough exercise, which will prevent them from becoming overweight and putting additional stress on their joints.

As a large breed, Landseers do require more food than most. The recommendation is 4-5 cups of high quality (higher protein, 22-24%; relatively low-fat content, 12-15%) dry food per day, split between two meals to prevent overeating and bloating.

Despite their size, Landseers are typically active dogs. As mentioned, making sure they get the proper amount of exercise will help with weight control and mitigating potential health issues like hip dysplasia. The recommendation is about an hour of exercise per day. Despite its days working alongside fishermen and saving potential drowning victims being long past, the Landseer is still very much a water dog and is built for swimming. If possible, getting your Landseer into the water for some exercise is ideal. The Landseer is built for the water and swimming. Not only are they excellent swimmers, but they love the water and, for a large breed especially, staying cool in the water while still getting exercise is important. This is important to remember because you don’t want to overexert your Landseer, which can happen on a particularly strenuous walk or hike, especially in hotter weather. The Landseer’s massive frame, weight, and heavy coat can lead to exhaustion and overheating, so it’s important to be on the lookout for any signs of trouble.

Landseers are very trainable dogs, due to their intelligence and docile nature. Years of working side by side with humans has ensured this breed’s responsiveness to commands and willingness to learn new tasks, even if in this case it’s just doing tricks and not hauling in fishing nets or hauling wood, though your Newfoundland would probably gladly do that for you too.

As noted, the Landseer really is the epitome of a “gentle giant”. They are loving animals with big hearts and big personalities to match their huge size. From their origins as working dogs for the fishermen of Newfoundland and their icy water rescue heroics, to their patiently posing for portraits in 1800’s England and their continued popularity as pets throughout Canada, the UK, and the US, the Landseer is a truly unique and wonderful animal.