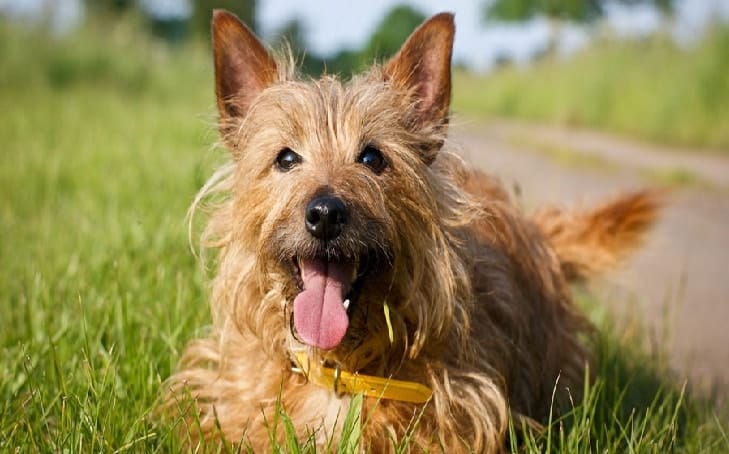 The Australian Terrier is a cute, small, independent, intelligent, happy-go-lucky kind of dog that suits almost any type of dog owner. This terrier breed is known for being smart, instinctive, observational, inquisitive, and amenable. Read on to find out more about the Australian Terrier and learn exactly what you can expect if you get one.

The creation of the Aussie Terrier breed is the result of mixing a bunch of different breeds over generations. The main known terrier breeds that came together to create this crossbreed includes the Cairn Terrier, the Dinmont Terrier, the Irish Terrier, and the Yorkshire Terrier, among many others.

The Australian Terrier comes in at an average weight of 12 to 14 pounds for adult females and 14 to 16 pounds for adult males. This dog typically stands at around 9 to 11 inches tall. The fur coating is rough and shaggy, but shedding is not a major issue – making it easy for owners to groom their pup themselves.

The American Kennel Club only recognizes two color classes for this breed: blue-and-yellow and solid red or sandy. There are many different colors of Australian Terrier including black, red, sandy, and white.

Some of these terriers have multi-colored coats with the most common splashes including a mix of black/red, black/tan, and blue/tan. You will find some purebred Aussie Terriers with various other colors ranging from pure black to white or silver.

The Australian Terrier is a highly adaptive dog from a behavioral standpoint. In fact, they rate as one of the most responsive terrier breeds. This breed is known for its historical watchdog traits and is always on high alert. You will notice this behavioral trait in many different ways—they are fast to bark or chase and will get scrappy when challenged by cats, dogs, and other small animals. They are independent, stubborn, persistent, and often intense.

With strangers, the Australian Terrier tends to be more reserved and observational. With children, while they can and will learn to be more playful, they are rarely as friendly as younger kids would like. They won’t put up with much playful teasing, horsing around, or clumsy behavior from smaller forms of life. However, the Aussie Terrier is a dog that stays close to and shows love for its parent(s). 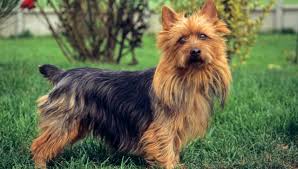 This breed of terrier is very aware and active for its size. Given some space and time, the Australian Terrier typically finds ways to both entertain itself and burn its energy off. This kind of dog is known for creating challenges like “trying to jump higher and higher”, or “digging more and more holes”, and displays a repetitive behavior.

This terrier breed is pretty “yappy”, especially when excited, but they are very easy to train and rank as the 34th out of all breeds for “Working and Obedience” (“The Intelligence of Dogs”, published by Stanley Coren).

As with most terriers, they love to play but are not so quick to engage with other dogs or young kids—this type of dog can also be “nippy” when playing around but this can be overcome with some proactive training. They do well with other dogs at home but the males are a bit more territorial and could clash with other male dogs.

Obedience classes are a good idea for this type of dog from a young age as they thrive off of mental stimulation and will develop a “mind of their own” otherwise. Their high level of activity also makes it a good idea to enroll them in agility classes. If you have sufficient space, making an obstacle course would also be a great way to keep your pup entertained and physically satisfied.

Prospective owners will need the appropriate time and space to accommodate the dog’s high level of energy. The best-case scenario for this breed is a fenced-in backyard with enough space to run around. Aussie Terriers like to take off and are known to be “escape artists”, so an enclosed space is best and they shouldn’t be taken off their leashes in public.

The Australian Terrier is not a “lap dog” by any means, however, the pup will generally respond well to any living situation and can handle a smaller space like an apartment if they get sufficient outdoor time. Additionally – while they are okay with being alone – an Australian Terrier is only recommended for owners that can still provide their pet with some attention and mental stimulation on a consistent basis.

The Australian Terrier does not have many significant genetic defects. The biggest worry for prospective owners is the high rate of the luxating patella—stability issues with the kneecap which frequently result in surgery. Out of all the dog breeds in the world, Australian Terriers rank 3rd highest for this condition and holds a 19% affected rate.

Some other serious health issues that can impact the Australian Terrier include diabetes (10%), cancer/tumors (7%), cataracts (5%), and epilepsy (4%). To a lesser degree, affecting 1% of the breed’s population, Legg-Calve-Perthes disease (LCPD) is a concern. This breed of pooch is also highly prone to allergic dermatitis which can trigger chronic itchiness.

For potential terrier owners worried about hip dysplasia, the Australian Terrier is not at high risk of this health issue. In fact, the rate is only around 3.5% which is very low compared to the 1000% higher affected rate with the Norfolk Terrier.

Disclaimer: You should always take breed health stats with a grain of salt. The bulk of these stats come from a 2002 health survey conducted by the Australian Terrier Club of America. 619 living terriers were used as a sample.

The Cost of Treatment

It’s a good idea to consider the priciness of treatment for common health problems. Some health issues might have minor veterinary costs, but many serious disorders and illnesses can have a serious financial impact if you do not have sufficient pet insurance coverage.

The Australian Terrier is most at risk of luxating patella, a health issue that affects nearly 1 in 5 of these dogs in their lifetime. The required knee surgery tends to run around $1,750 to $2,500 for one side (unilateral) or $2,750 to $3,500 for both sides (bilateral).

Typically, the monthly maintenance cost for a dog with diabetes is around $20 to $90 for insulin and $8 to $16 for syringes. A one-off cost for a glucose monitor would run anywhere from $20 to $500 while getting a vet to perform this test would run roughly $10 to $40 every month. The cost of lancets and test strips is anywhere from $5 to $15 monthly; based on your comfort level, you can choose from either a blood or urine test.

An often overlooked expense for diabetic dogs is the premium in the cost of diabetic dog food. You can expect to pay around $2.90 per pound, but this added expense is a negligible difference with the lightweight Australian Terrier.

Cancer and tumor treatment are two of the priciest health issues to battle as a pet owner. The total cost of fighting cancer will depend on the type, stage, and your dog’s own response to treatment—it can run beyond $20,000 in some cases. The total cost of tumor treatment will vary depending on whether the location is accessible with surgery. The full process of radiation sessions to remove the tumor can run in the $4,500 to $9,000 range.

While only 7% of these terriers will get cancer or have a tumor, an overwhelming 67% of mature Australian Terriers will die from cancer. Especially as your Aussie Terrier gets older, getting pet insurance to cover high costs like cancer or tumor treatment can greatly improve your pup’s lifespan.

In most cases, cataracts are adult-onset which means the expense will only come up later in your dog’s life. However, the cost of treatment for cataracts in dogs is around $2,000 to $3,000 which makes it a costly procedure to face. While the cost is a concern, only 1 in 20 Aussie Terriers will end up with cataracts at some point in their lifetime.

While more than a third of the Norfolk Terrier breed population experiences hip dysplasia at some point, this health problem only affects 3.5% of all Australian Terriers. However, it is still a very costly problem to battle with the average cost for hip dysplasia surgery running in the $4,000 to $6,000 range.

This bone disorder impacts the hip joint and occurs at a low rate of just 1 in 100 Australian Terriers. The cost of the surgical procedure will vary depending on whether it is a unilateral or bilateral issue, but in most cases, it will only affect one side. Typically, Aussie Terrier owners can expect to dish out around $1,500 to $3,000 to get surgery for their pup if they end up with Legg-Calve-Perthes disease.

The typical Australian Terrier will live to be between 11 and 14 years of age. The most common cause of death is cancer (67%), but nearly 1 in 5 of these dogs die from old age (17%). The portion of undetermined deaths is just below that (16%), while the next highest indicated cause is diabetes (13%).

Choosing the right health coverage plan for any pet is a daunting task. The options are vast and many providers do not offer enough to cover all the possible bases. If you own or plan to own an Australian Terrier, take the list of common health issues and match it with the covered costs with any prospective pet health insurance provider.

To simplify the process, make use of our Pet Insurance Quote Finder Tool and compare all your options in one easy-to-navigate space.

The average cost for pet insurance for a dog will vary depending on your location. To give you an idea, the average cost of insurance is $42 monthly for a dog in Portland, OR, versus $49 monthly in New York. Definitely, you should compare quotes, but also keep an eye out for a difference in potential costs aside from your monthly premiu, such as any deductibles you might pay when making a claim.

Get Your Healthy Dog

Now you know how smart, fun, and generally, healthy the Australian Terrier breed is and what to expect as an owner. If you do not already own one, the information supplied about this breed should be enough to confirm that an Aussie Terrier is a great choice.

You’re also now equipped with the resources to find the best pet health insurance policy to protect your pup as he or she ages, to prevent financial issues if any high-cost treatments or surgeries are ever needed. Thankfully, this terrier breed isn’t known for many genetic defects but it is always better to be safe than sorry!