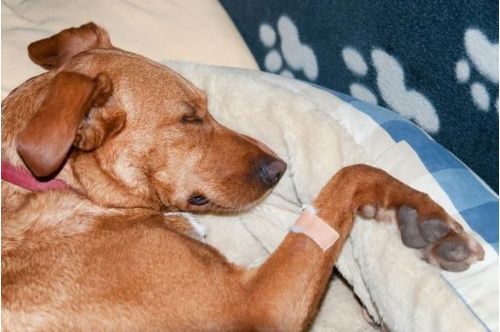 What is Canine Epilepsy?

Epilepsy is the clinical way of describing recurring seizures. Your dog could suffer from a seizure as a one-time event from a variety of causes, but only seizures that repeat again and again over a period of time are referred to as epilepsy. Seizures are a sign and symptom of brain disease. Epilepsy generally starts in dogs 6 months to 5 years of age, usually at 2-3 years. There are two types of epilepsy depending on the underlying cause of the seizures.

This is where the seizures are a symptom of an underlying brain disease that has been identified by a veterinary professional. Underlying diseases may be brain tumors, kidney disorders or infections to name a few.

This describes epileptic seizures where the underlying cause has not been identified. For example, some minor strokes can go undiagnosed but can cause ongoing seizures in your dog. Many idiopathic epilepsy cases are caused by congenital deformities that are present at birth.

Note: Call your veterinarian or local veterinary hospital immediately if your dog suffers from a seizure.

Epilepsy is one of the most common neurologic diseases in dogs. Some studies estimate up to 4% of all dogs are affected. In some breeds, the incidence rates may be as high as 14% and higher.

What Breeds are Most Susceptible?

Epilepsy can affect any type of dog, including mixed breeds. However, there are some breeds of dogs that are more susceptible than average due to genetic predisposition. It is recommended that dogs with epilepsy should not be used for breeding, since this tendency can be inherited.

There are three general types of seizures ranging from mild to severe.

Typically affect only a small part or one side of the body. These are often caused by a brain lesion. Partial seizures can be simple such as facial twitching or excessive pawing or biting of a body part.

They can also be more complex and cause bizarre behavior changes such as excessive barking, biting at the air and aggression without provocation.

These type of seizures affect the whole body and can be divided into two types, grand mal and petit mal.

Grand mal seizures are the most common. A dog experiencing a grand mal seizure usually falls on his side and has uncontrollable muscle activity such as kicking his legs.

Petit mal seizures do not result in convulsions, but the animal loses consciousness. It may look like the dog just collapsed.

The worst form of seizure is one in which the dog has one or more grand mal episodes without recovering from the first. This dog may actually be in a seizure for hours.

The actual triggering of a seizure is unknown, but many dogs tend to seizure during periods of excitability. Many dogs experience epileptic seizures while playing, running around or chasing balls.

How is Epilepsy Diagnosed?

Because epilepsy is commonly caused by a congenital issue or genetic disorder it’s important for your veterinarian to review your dog’s health history first.

Your vet will also want to perform a full neurologic exam and run a panel of tests. In some cases a CT scan or MRI might be required to find the underlying cause of your dog’s seizures.

How is Epilepsy Treated?

Treatment for epilepsy is usually not begun until a seizure is severe or multiple seizures have occurred and a pattern is observed.

It is very important to know the pattern of seizures in your dog so your veterinarian can determine if the treatment is helping.

Treatment includes surgery to remove a tumor in the brain, nerve stimulation, special diets and most commonly medication to control the seizures.

The goal of epilepsy treatment is to decrease the frequency, severity, and duration of the seizures.

Medications used to treat epilepsy are given orally. However, if your dog experiences prolonged seizures then injectable drugs such as valium are administered for rapid effect.

If the underlying cause of your dog’s seizures is a tumor then brain surgery will be necessary to reduce the frequency and severity of your dog’s epilepsy.

Get Your Free Quotes