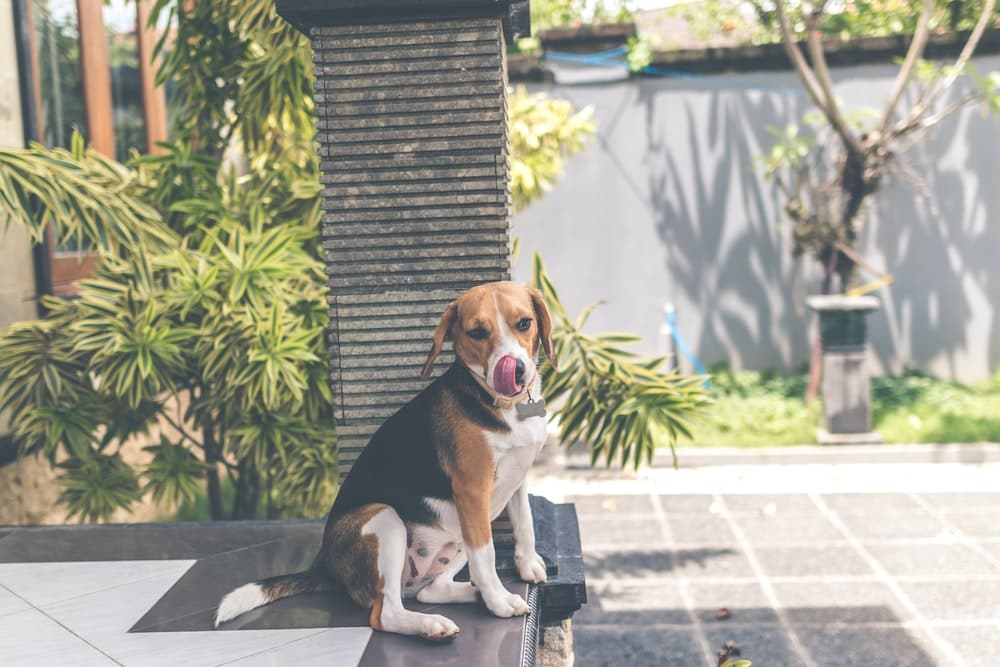 Though gentle and friendly, the English Foxhound is not your usual family dog. It has lots of energy to burn and it is prone to baying. This resolute sniffer has been roaming the English countryside in search of its next prey since the 16th century and was the favorite companion of nobilities. Today, this pooch is still as agile as ever and could be an excellent family dog as long as you have acres of space as its playground.

The English Foxhound’s history can be traced to the 16th century, although some historians report the development of the breed as far back as the 13th century. This dog is created with the primary purpose of hunting foxes. Thus, it has the perfect characteristic combination of its forebears: Bulldog for its tenacity, Greyhound for its speed, and Fox terrier for its hunting acuity. As the sport of fox hunting became so popular amongst the gentry in the mid-1700s, the English Foxhounds of excellent breeding stock became all the rage as well.

This breed made its way to the United States during the 18th century, and along with other hound types, it became the ancestor of the rangier American Foxhound. Today, the breed serves as a companion dog if it’s not winging it in conformation shows.

A typical pack hound, the English Foxhound is a social creature that can get along well with children and dogs, as well as other animals. Driven by its superior sense of smell, you can expect this persistent sniffer to disregard your commands when its curiosity takes over. With a body built for activity, it can run and play for hours on end. Owning an English Foxhound means you’ll be treated to lots of baying concert.

Although temperament can be largely dependent on genetics, the English Foxhound is generally independent and sometimes stubborn. Thus, this dog is not suitable for novice owners. To be able to teach this kind of dog basic obedience training, you need to have the aptitude and patience to train your puppy firmly and consistently.

This large, long-legged dog can reach a height of 23-25 inches at the withers and could weigh 55-75 lbs. Sporting a wide skull with a long muzzle, the English Foxhound also has large drop ears and rounded paws. They have short coats, which has the typical tri-color appearance of black, white, and tan.

The English Foxhound is generally a healthy breed, with a life expectancy of 10-13 years. However, just like any other dog, they can be predisposed to common canine health issues. As an owner, you have to be particularly mindful of the following health conditions:

Just like human kidneys, dogs also have kidneys that serve as filters and maintain the balance of elements in the blood. Anything that’s filtered out is excreted out of the body as urine. When dogs ingest toxic substances or lots of medications, these could damage their kidneys. Other causes include infection, kidney blockage, cancer, and genetics.

If you notice your dog exhibit symptoms such as increased thirst, depression, urinary incontinence, blood in the urine, lethargy, depression, and sometimes, blindness, it’s best to schedule an appointment with the vet. Although there is no known cure for this illness, there are some interventions that can slow down the progression of this condition. Depending on the severity, the vet could prescribe medications, initiate fluid therapy, and recommend food specially formulated for dogs with this disease.

A common issue among large breeds, hip dysplasia is a skeletal condition that results from the abnormal development of the hip joints. Instead of gliding smoothly, the ball and socket of the hips grind against each other causing a wide range of symptoms that includes decreased activity, lameness in the hind leg, abnormal gait, stiffness, loss of muscle mass, and pain.

Watching your pup suffer from this disease is painful for any fur parent. It’s best to consult the vet right away when you notice early signs of this disease. Treatment may include prescription medication, physical therapy, or surgery, depending on the severity.

Also known as seizure disorder, epilepsy is a result of an abnormality of the electrical activity in your dog’s brain that leads to disturbances in your pooch’s movements and behavior. Poison, liver disease, head injury, anemia, brain cancer, and kidney disease can cause these epileptic episodes. However, in some instances, seizures can have an unknown cause.

When you notice your pup collapsing, twitching, drooling, paddling its legs while lying down, losing consciousness, and foaming at the mouth, it’s vital that you visit the vet right away. There are lots of treatment options for epilepsy depending on its underlying cause. In some instances, the vet could prescribe an anticonvulsant medication and a change of diet.

Tips for Taking Care of an English Foxhound

As a pet parent, you’re ultimately responsible for making sure that your furry pal is in tiptop condition. Here are things to consider when raising an English Foxhound pup.

This is a rare breed so it isn’t much of a surprise that there are few reputable breeders of this type of dog. However, when you do manage to find one, be prepared to wait since each of the puppies may already have owners waiting to take their pooch home. When choosing a puppy, go for the playful one. The pup that’s not shy to approach people, not beating its other litter mates, and not cowering in the corner is generally one with mild temperaments.

To make sure you’re getting a healthy puppy, never settle for puppy mills or pet stores. Always go for expert breeders who test their dogs for genetic abnormalities. When talking with breeders, always ask if you can visit their place and check out at least one of the parents of your soon-to-be pup. Ask for health clearances from the Orthopedic Foundation for Animals for hip dysplasia as well as other health issues and Canine Eye Registry Foundation for possible eye issues.

English Foxhounds shed, but brushing your pooch’s coat once a week using a hound mitt or rubber curry brush can keep this to a minimum. This helps in the even distribution of its coat’s natural oil. And you can give it a bath only when necessary as it doesn’t get dirty easily.

While you’re grooming your pooch, take time to check its eyes for discharges and its ears for excessive wax and moisture. Like a typical hound, the English Foxhound has pendulous ears, which are susceptible to infection and mites infestation. Trim your dog’s nails regularly using a nail clipper or grinder to prevent splinter.

An adult English Foxhound can consume 2.5 to 3 cups of good quality dry dog food per day. Make sure to divide this into two meals every day. Although this is the recommended food intake for this breed, it goes without saying that the amount of food you give it is also dependent on the dog’s level of activity. If it spends most of its time lazing around, it may eat a lot less than a dog that spends most of its day chasing foxes.

Ideally, you should start basic obedience training and socialization while it’s still a puppy. If you are raising other smaller animals, it’s best to get the puppy exposed to those animals. Growing up with small animals can help curb its prey drive when surrounded with these animals early on. When taking your dogs out on a walk, keep it on a leash. No matter how well you’ve trained it, always expect it to drop all those years of obedience training to go wander off in the direction of an interesting scent.

English Foxhounds thrive in the countryside where it can run freely to its heart content. This is not an apartment dog. Aside from the limited space of an apartment, you’ll have disgruntled neighbors complaining because of your dog’s loud baying sound. Although this type of pooch is gentle, it’s not the best dog to own when you have little in children in the house. This dog is very bouncy and rambunctious so it could easily knock over small kids unintentionally.

The English Foxhounds can be a test of patience because of its headstrong and independent personality. However, when you’re quite adept at raising hounds, it is very fulfilling to own and train this rare and noble breed.