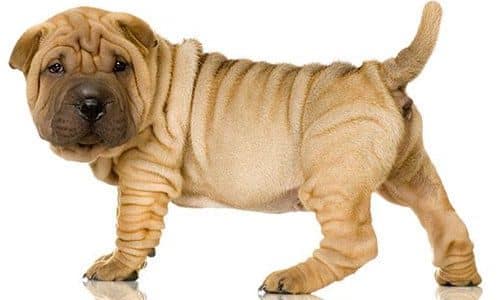 For additional information on FSF, including more of the science behind how it works, check out this webpage at Cornell University.

Why does it affect Shar-Pei Dogs?

As the name suggests, the disorder affects only Shar-Pei’s. As for why, it’s believed that there is a connection to the distinctively wrinkly skin that the breed is so well known for.

These wrinkles are caused by a protein called hyaluronan. Due to a genetic mutation found in the breed, Shar-Pei dogs overproduce hyaluronan, which has the effect of puffing up the skin and causing those trademark Shar-Pei wrinkles. While the excess of hyaluronan that causes the wrinkles is not a problem in and of itself, in some Shar-Pei the hyaluronan that is produced is of such poor quality that it deteriorates rapidly and creates inflammation. It is that inflammation that causes the fever and can lead to organ damage.

Signs and Symptoms of FSF

As noted, one of the major symptoms is fever. The fevers will often develop suddenly and, in many cases, will simply run their course, usually lasting between 12 and 36 hours. During this period, the temperature may rise to as high as 107 degrees Fahrenheit. Normal body temperature for dogs is between 100 and 102 degrees Fahrenheit. Anything above 102 is considered a fever, while a fever that reaches 106 is considered a medical emergency. For this reason, it is important to be able to take your dog’s temperature when necessary, as well as to be vigilant if your Shar-Pei is showing any of the signs of FSF.

During the fever, the dog will be lethargic and have little to no appetite. As suggested by one of the common alternative names for the disorder, a common physical sign is a swelling of the dog’s hocks (the back part of the upper leg, above the ankles). This swelling will disappear once the fever has passed. While this is the most common and noticeable physical symptom of FSF, others include a swollen, painful muzzle and nausea and/or diarrhea.

While the fevers are unpleasant and can be dangerous on their own, the greater threat comes from the organ damage that can be caused by the fevers. While the liver, spleen, and GI tract can also be affected, it is by far the kidneys that are at the most risk for becoming severely damaged. This damage is caused by a protein called amyloid that accumulates in the kidneys as a result of the body’s response to the fever, causing a condition known as amyloidosis. With this condition, the kidneys lose the ability to filter protein, one of the critical functions of the kidneys. As the dog loses, through urination, proteins that normally would be retained, it begins to lose weight, and to develop blood clots and high blood pressure. In severe, chronic cases of FSF, this can lead to kidney failure (or, less commonly, liver failure) and death by as early as six years of age.

Because all Shar-Pei are susceptible to FSF, it is important to have your Shar-Pei screened for the disorder regularly. The best method for screening for FSF is a urinalysis, which will detect protein in the dog’s urine and/or excessively watery urine, another sign of FSF.

While only Shar-Pei are affected by FSF, not all Shar-Pei dogs have the disorder. Additionally, all dogs, including Shar-Pei, can develop a fever for number of other reasons (e.g., from a wound or some other type of infection). While closely monitoring your Shar-Pei for the signs and symptoms of FSF and having regular urinalysis tests performed are recommended for catching FSF early on, some may choose to have a blood sample from their Shar-Pei tested to determine if they carry the specific genetic mutation that causes the disorder.

As noted, veterinary anti-inflammatory medications are often effective for treating the fevers caused by FSF. Because the fevers cause a great deal of discomfort for your Shar-Pei, pain relief medications will often be prescribed in addition to anti-inflammatory medications. Even more important than controlling the fever and discomfort, however, is preventing or mitigating any damage to the kidneys. The primary treatment for this is a medication called colchicine. Colchicine acts to disrupt the formation of excess proteins in the kidneys, thus slowing or preventing the serious kidney damage that can result from FSF. Colchicine is a prescription medication and must be prescribed by your veterinarian.

In addition to colchicine, the use of certain antioxidants has seen success in fighting the kidney damage caused by FSF. Some antioxidants have been shown to prevent the formation of amyloids. Some of the recommended antioxidants are omega-3 fatty acids (fish oil), vitamin C, lecithin, and glucosamine. In addition to helping preserve the fatty acids of cell membranes, they have also been shown to improve the quality of the hyaluronan your Shar-Pei’s body produces, reducing the inflammation caused by the breakdown of poor-quality hyaluronan common to many Shar-Pei’s. Additionally, supplementing with magnesium may be effective in regulating the breakdown of hyaluronan in your Shar-Pei. Treatment with these antioxidants, as well as certain herbal antioxidants, is recommended as an early, preventative step. Your veterinarian should be consulted to develop the best protocol for your dog.