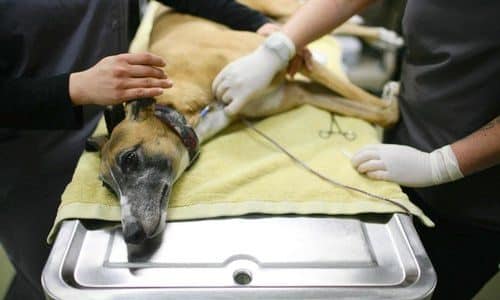 Hemophilia in dogs is a genetic disorder that prevents blood from clotting. As a result, dogs with the disorder can bleed profusely, even from small wounds. Internal bleeding can also contribute to health issues.

Hemophilia usually occurs in males, although the genetic cause is carried by females and passed on to their male puppies. Veterinarians have identified two types of hemophilia in dogs: hemophilia A (Factor VIII deficiency) and hemophilia B (Factor IX deficiency). Hemophilia A is much more common than hemophilia B.

Since hemophilia is a genetic condition, dogs get the disorder from their parents. The genetic risk factors, however, vary between male and female dogs.

Dogs that show symptoms of hemophilia include:

Female dogs with one abnormal gene do not typically show signs of hemophilia. They can pass the disease on to their male offspring, though. Assuming that the male parent does not carry the abnormal gene for hemophilia, a female has a 50% chance of passing the condition on to her male children.

Common Symptoms of Hemophilia in Dogs

Hemophilia can affect dogs throughout their lives, from puppyhood to adulthood. Common symptoms of hemophilia in dogs include:

Some dogs experience more severe hemophilia than others. Each dog’s symptoms will vary depending on the severity of its condition.

Dogs with extreme forms of hemophilia can die from minor injuries. Since the blood does not clot to seal the wood, bleeding can continue. Even a small cut could cause the animal to lose so much blood that it cannot survive without immediate medical attention.

Diagnosing hemophilia in dogs requires a blood test that identifies coagulation defects. Blood tests can differentiate between hemophilia A and hemophilia B by measuring the levels of coagulation Factor VIII and Factor IX.

Although blood tests accurately diagnose hemophilia in dogs, they can have challenges telling the difference between carrier and clear females. Carrier females without hemophilia often have low levels of Factor VIII, but the levels are not low enough to prevent coagulation. In unclear cases, veterinarians can confirm a diagnosis by looking at the dog’s pedigree.

Many dogs with mild hemophilia never need treatment. Unless they get injured or must undergo surgical procedures, the dog’s blood condition may not have an impact on its life. An owner’s best option is to pay close attention to the animal and avoid dangerous situations that could cause bleeding.

Hemophilia is an incurable condition, but there are treatment options that can protect dogs when necessary. Some treatments include:

People looking for companion animals should learn about a dog’s pedigree before bringing it home. If either parent has a high risk for passing on abnormal genes that cause hemophilia, it makes sense to choose another dog that doesn’t have a high risk.

Pedigree becomes especially important when choosing purebred dogs from breeders. Breeders should have information about each animal’s parentage. Since interbreeding is common among purebred dogs, they often have a higher risk of hemophilia.

Pet health insurance helps pay for expensive veterinary treatment when your dog gets sick or has a bad injury.