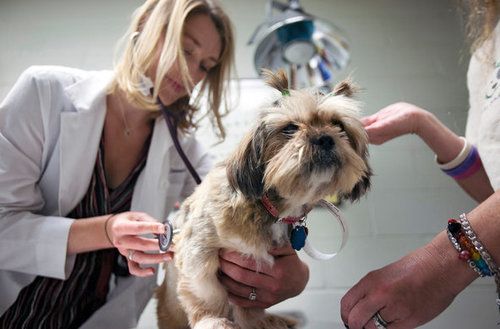 What is Mellitus Diabetes in Dogs?

There are two types of diabetes in dogs, mellitus (Type I) and insipidus (Type II). Mellitus diabetes (Type I) is characterized by insulin deficiency. This is the most common form of the disease, which occurs when the pancreas is incapable of producing or secreting adequate levels of insulin.Dogs who have Type I require insulin therapy to survive.

Mellitus diabetes in dogs is a disease that involves the pancreas, which is a critical organ involved in the canine digestive system. The pancreas produces insulin, which controls the glucose levels in the bloodstream, similar to how it works for humans. It also creates enzymes that play an important part in helping food digest correctly.

When the pancreas doesn’t work properly, it can’t control glucose properly. This leads to mellitus diabetes in dogs, which causes high glucose levels in their blood and they are not able to process glucose properly. When the insulin from the pancreas is unable to do its job, the dog’s cells can’t get the glucose they need for energy. They have to turn to a different source, which has many negative health consequences for canines.

Much like humans, dogs have multiple types of mellitus diabetes they may suffer from. Type I is the most common and is caused by the pancreas no longer creating cells that produce insulin for the body. Type II mellitus diabetes in dogs results in a pancreas that has some insulin producing cells left over, so the dog is capable of regulating some glucose. However, they often need medical intervention to have sufficient insulin production. Type II is generally seen in older dogs that are overweight. Type III mellitus diabetes occurs due to hormone levels that cause insulin resistance. The most common situation that this type occurs is during pregnancy.

Signs and Symptoms of Mellitus Diabetes in Dogs

The pancreas doesn’t fail all at once in most cases, so you’ll have symptoms that range in severity based on how long the dog has mellitus diabetes. Some of the earliest signs that you’ll notice include your dog drinking an excessive amount of water and a resultant large urine output. They get dehydrated easily despite their water intake. They may eat larger amounts than normal yet suffer from weight loss, even if nothing has changed in their diet.

As the glucose levels in the blood increase and the pancreas function worsens, your canine companion may lose their appetite completely. Weight loss commonly continues, and your dog’s behavior may shift dramatically. A formerly high-energy pup may be listless and spend most of the day sleeping. They could have little to no interest in the enrichment activities that they love best, like going on hikes or playing with their toys.

When they do eat, they vomit up their food frequently and can’t keep anything down. They may have problems walking around due to vision impairment, or you could see full cataracts formed over their eyes.

Higher levels of glucose are found in the blood, if you happen to have a blood test run before you suspect mellitus diabetes, and your dog’s urine will have higher than normal glucose values.

If mellitus diabetes is not identified and treated in a reasonable timeframe, your dog may develop ketoacidosis. This condition begins breaking down fat cells for energy, due to the inability to use glucose to fuel their body. Eventually, they will fall into a coma and potentially die.

Early intervention and ongoing management are critical for helping a dog with mellitus diabetes enjoy a long, full, high-quality life. Once you suspect that your dog may have mellitus diabetes, the diagnostic process is relatively straightforward. Testing the blood or the urine for glucose allows your veterinarian to determine whether diabetes is causing the issues. It’s rare to find any other condition that impacts canine glucose the way mellitus diabetes does, so you won’t have to wait long to start on the treatment plan for your beloved pet.

After diagnosing mellitus diabetes in dogs, there are several treatment options, based on the type you’re dealing with. Type I is entirely dependent on insulin injections, as the dog’s body is unable to make it. Type II may need insulin injections, depending on the current function of the pancreas.

For a typical treatment plan, you inject your dog with insulin twice per day.

Your dog’s diet may also need to change to a special food formulated for mellitus diabetes, and you also need to have consistent control over food to effectively treat diabetes. The type of food they’re eating needs to remain the same in the long-term, and it must be in identical portions and times. The primary reason for this is down to dialing in the right amount of insulin to give in the shot.

If your dog doesn’t get enough insulin, then it could lead to extremely high glucose values in the blood. When these are too high, they could fall into a coma or experience other severe complications. If they get too much insulin, then their blood sugar drops and can also result in these problems. The insulin dosage is a balancing act that takes time to figure out.

You’ll also need to test your dog’s glucose levels throughout the day to make sure that they are within the normal range. There are a number of ways to do that, and some.

Dogs with mellitus diabetes can thrive with the right long-term care. Consistency is the most important characteristic, as your dog needs an insulin shot every 12 hours, and a set meal schedule. Free feeding is not an option, but you can use a timed, automated dog feeder if you need to be away from the house during one of the meal times.

While it might seem intimidating to give the insulin shots at first, it becomes routine in no time and you can make it part of your dog’s training.

If you travel and you’re unable to take your dog with you, work with a pet sitter or a boarding facility that is familiar with handling mellitus diabetes dogs.