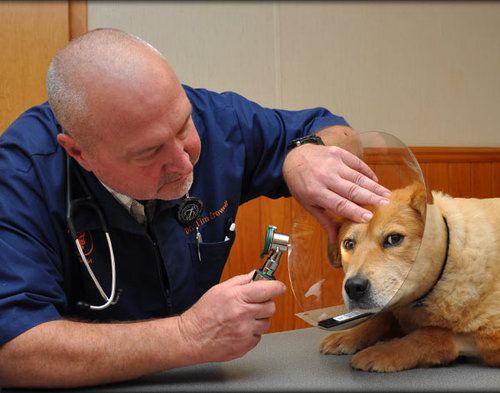 The term “prostatic cyst” can refer to any type of cyst that develops in or near the prostate. Prostatic cysts in dogs may go undetected without causing any symptoms. Other male dogs may experience troubling symptoms that culminate in premature death.

While some dogs never experience trouble from prostatic cysts, others can present a wide range of symptoms that affect urination, defecation, and movement.

Some of the most common symptoms of prostatic cysts in dogs include:

A dog that shows a sudden decline in health should see a veterinarian who can diagnose the animal’s condition.

Dogs rarely show symptoms until their cysts become large enough to interfere with other organs.

Causes of Prostatic Cysts in Dogs

Prostatic cysts can occur spontaneously without explanation, although there are likely genetic components that put some dogs at a higher risk than others.

Paraprostatic cysts located immediately adjacent to the prostate come from a congenital condition present before birth. In these cases, cysts form from female reproductive tracts that remain in the male. The cysts may fill with urine, which makes them grow until they press against the bladder, colon, or other organs.

Veterinarians have developed a variety of options for diagnosing prostatic cysts in dogs. Digital palpation is the easiest and least expensive diagnostic option. When performing digital palpation, the veterinarian inserts a finger into the dog’s rectum to feel for an enlarged prostate. Unfortunately, the examination technique has a low accuracy rate. Unless the prostatic cyst has grown to an exceptional size, veterinarians may miss signs of enlargement.

Imaging techniques provide a more accurate diagnosis of prostatic cysts in dogs. An ultrasound can reveal the presence and size of cysts. Veterinarians can compare the images with those of healthy dogs to determine whether the patient has a prostatic cyst.

When one diagnostic tool doesn’t offer sufficient evidence, veterinarians may confirm their suspicions by combining two or more tests.

Prostatic cysts have limited treatment options. Surgery is the only treatment that can eliminate the problem. Unfortunately, cysts left in the body will often continue to grow until they prevent the body from functioning normally, or cause infections after the cysts burst.

One surgical option involves opening the dog’s abdomen to remove the prostate and the problematic cyst. This approach may require an invasive procedure with a lengthy recovery time.

When possible, surgeons can take a less-invasive approach by draining the cyst before extraction. Once the cyst has been drained, surgeons can remove the prostate through small incisions in the abdomen. This method still has a fairly long recovery time, but it’s much shorter than using large incisions.

Prostatic cysts in dogs don’t always cause problems that need treatment. Once a dog starts to show symptoms, though, it becomes likely that the cyst will continue to grow until it prevents the dog’s urinary and gastrointestinal systems from functioning correctly. Eventually, the dog’s body will become overrun with toxins.

Early treatment can help prevent the worst symptoms of prostatic cysts in dogs, but owners may not know about the situation until the cyst becomes large enough to cause health problems.