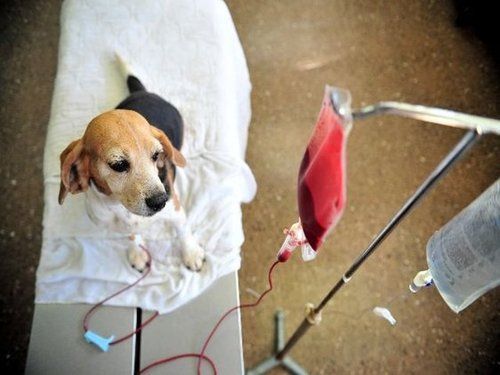 Von Willebrand’s disease is one of the most common hereditary bleeding disorders in dogs. This condition is due to a deficiency of a specific protein, the von Willebrand factor (vWf), which is necessary for platelets to stick together to form a clot. This is a distinctly different disorder from hemophilia.

Overview of the Blood-Clotting Process

When the dog is injured and its blood vessels tear, platelets are activated to clump together at the affected site following the body’s natural attempt to stop the bleeding. While the platelets are plugging up the torn blood vessels, blood clotting factors (one of which is von Willebrand factor) are activated to make the platelets stick together and seal the wound permanently. This process leads to the production of fibrin to form a mesh that would impede blood from flowing out.

Von Willebrand factor is a protein complex that’s produced both by the cells lining the blood vessels and platelets. Here are its numerous functions in the blood-clotting process:

Adhesive. The vWf is responsible for binding the platelet to the subendothelial layer of the blood vessel—the first event in the race to stop bleeding.

Plug stabilizer. Von Willebrand factor can help provide stability to the plug by binding fibrin to the platelets.

When one of the proteins that make up vWf is absent or defective, the body’s blood clotting mechanism is disrupted. There will be prolonged bleeding when the animal is injured as well as spontaneous instances of epistaxis (nosebleed), blood in the urine or in the feces.

There are 3 forms of the disease, depending on the structure and quantity of plasma von Willebrand factor. Here are the characteristics of each type:

Although all the proteins making up the plasma vWf are present and its structure is normal, there is a very low concentration of it. This type of von Willebrand disease is common in breeds like Doberman Pinscher, Airedale, Golden Retriever, Standard Poodle, German Shepherd, and Shetland sheepdog.

Dogs that have this type of von Willebrand disease will show low concentration of vWf. Additionally, its structure is abnormal since the larger proteins that make up plasma vWf is absent, leaving the smaller proteins to function as stabilizers of the platelet plug. Bleeding is more severe than Type I and this has been reported in breeds like German Wirehaired Pointer and German Shorthaired Pointer.

This type is the most severe of the three and is characterized by the complete absence of von Willebrand factor. This has been reported in over 50 dog breeds, which include Scottish Terriers, Dutch Kooikers, Chesapeake Bay Retrievers, Shetland Sheepdogs, Border Collie, and Pomeranian, to name a few.

Clinical signs of this disease range from mild to severe bleeding. There are even some dogs that carry the genes for von Willebrand’s disease without exhibiting any signs of bleeding. Usually, this condition is noticed when dogs undergo a sterilization procedure. After the surgery, dogs affected with this condition will suffer prolonged bleeding. Other cases report of spontaneous hemorrhage in the urinary bladder, gums, nose, vagina, and gastrointestinal tract.

While most cases are noticed in the early months or years of a dog’s life, it’s quite possible for the puppy not to expressly show symptoms of the disease and exhibit these symptoms later on in its life. This is because other medical conditions like hypothyroidism and infection as well as certain drugs could exacerbate symptoms of this disease.

Aside from taking the medical history and performing a physical exam on the dog, the veterinarian may also request for specialized testing to diagnose von Willebrand’s disease and/or rule out other conditions that may cause the same set of symptoms.

This test can be done in the veterinary clinic and is used to measure the pet’s ability to form a clot. However, this test is not specific to von Willebrand’s disease since other bleeding disorders may reflect the same prolonged bleeding result.

This specialized diagnostic test measures the concentration of von Willebrand’s factor present in the blood sample. Generally, a dog with vWf:Ag result of less than 15% is considered severely affected by the disease. Those with less than 50% are in the abnormal range and while dogs in this range may not exhibit symptoms, they are carriers of the disease and may pass on the trait to their offspring.

Aside from these tests, the veterinarian may request for standard diagnostic procedures like complete blood count (CBC), urinalysis, biochemical analysis, and thyroid exam to determine the overall health of the pet and the condition of its major organs.

Dogs with vWd don’t need treatments unless they suffer severe blood loss due to an injury or if they have to go through surgery due to other medical conditions. In these cases, the veterinarian may consider these interventions to stem the dire effects of this disease:

This drug is used to stimulate the release of the stored vWf in the endothelial cells. However, this medication does not work in dogs with Type III vWd as they don’t have vWf to begin with.

Dogs with severe bleeding often receive a transfusion of fresh and fresh frozen plasma or plasma cryoprecipitate. Although whole blood can also be given especially to hypoxic and anemic dogs, this is not recommended as the vWf in whole blood may not be enough to stop the bleeding.

If bleeding occurs due to minor cuts, the veterinarian may deem suture, wound glue, or bandage as the best approach to control the hemorrhage. Additionally, drugs that interfere with the blood-clotting process like heparin, aspirin, and sulfa-type antibiotics should not be given to the dog.

Pet owners must take extra precautions to ensure that their dogs avoid injury as much as possible. Since this is a hereditary disease, there is no cure for this. Fortunately, this disease is manageable and dogs suffering from this condition can still enjoy a long and quality life. The important thing is for dog owners to be mindful of symptoms. Also, the veterinarian should be kept in the loop always especially when the dog suffers from other medical conditions that may require prescription medicines or surgery.

The only way to prevent this disease is to stop breeding dogs that are carriers. Breeds that are predisposed to this condition must go through vWd screening to make sure they don’t produce offspring that may exhibit severe symptoms of von Willebrand’s disease. Aspiring pet owners must be proactive in asking breeders for health test results that clear the puppy’s parents from this condition. This is the best way to prevent the transmission of this genetic defect to puppies.