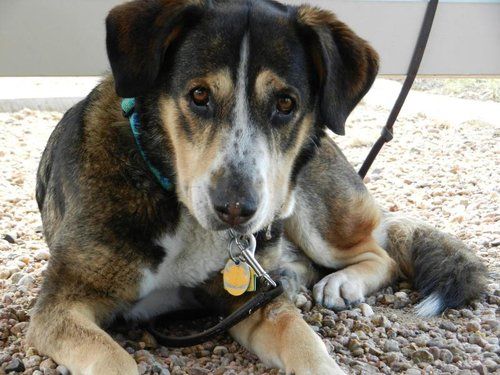 Mutts are the Best!

The U.S. doesn’t have a national dog. But if we did, there’s a strong argument to be made for the humble mixed-breed pooch. Mixed-breeds, or mutts, make up 53% of the US dog population.

They’ve been Hollywood movie stars (Old Yeller), US Coast Guard heroes (Sinbad), and make up a growing percentage of our country’s assistance dogs.

That’s not to mention the joy mutts bring to their human’s lives every single day.

Yet mutts often have a tough life. They’re frequently rejected in favor of their purebred cousins and left to languish in shelters, never getting the chance to shine.

That’s why celebrity pet expert Colleen Paige created National Mutt Day, celebrated on both July 31 and December 2 with the aim of putting the spotlight on the thousands of mixed-breed dogs desperately seeking a forever home.

In honor of National Mutt Day, pet insurance experts and mutt lovers PetInsuranceQuotes.com have dug up seven of the many reasons prospective pet parents should consider welcoming a mixed-breed dog into their home.

Seven Reasons You Should Adopt a Mutt…

Dog lovers know every canine is one-of-a-kind, but mixed-breed dogs are truly unique thanks to their grab-bag of genes.

Mutts come in every shape, size, scruff, and shade you can think of! Personality-wise, too, mixed-breed dogs can have any disposition under the sun, depending what family traits win out.

A mixed-breed pup can be compared, Forrest Gump style, to a box of chocolates – you can never be sure what you’re going to get. You can, however, make an educated guess.

Plus, mixed-breed dogs tend to be more easygoing as they’re not bred for particular personality traits.

Top Tip: For some pet parents, watching a mixed-breed pup’s personality unfurl as he grows up is part of the adventure.

For others – those with kids, for example – some clues beforehand are preferable. The shelter or a veterinary professional will be able to speculate about a pup’s parentage and his personality.

There are even programs like SF Peninsula Humane Society and SPCA’s ‘Who’s Your Daddy?’, which uses DNA tests to show exactly what breeds are on their shelter dogs’ family trees!

Greater diversity in your mutt’s genes may make him healthier – a theory known as “hybrid vigor.” Many vets agree that mutts are less likely to have a high dose of the purebred genetic material which can lead to increased risk of hereditary disorders.

A huge study of more than 90,000 canines, published in the Journal of the American Veterinary Medical Association in 2013, found that purebred dogs were more likely than mutts to have ten genetic disorders, including cataracts and hypothyroidism.

Top Tip: While the risk of particular illnesses may be diluted in a mixed-breed canine, they’re not invincible. Talk to your vet if you want to investigate whether your mutt might have inherited more than his good looks from either of his parents!

Who’s got the smarts?

In 2008, in what must have been one of the most fun scientific studies on record, researchers in Aberdeen University put 100 dogs through seven tests including finding their way through a maze and answering such existential questions as: “If the bone is under a tin, is it still there?” The results showed that the crossbred dogs were better at solving problems and had superior spatial awareness.

The mix also matters: Best-in-class was a collie-spaniel cross – two breeds renowned for their intelligence.

Top Tip: Looking for an incredibly intelligent mutt? Mixes of border collies, golden retrievers, Labrador retrievers, and poodles are among those who’ll go straight to the top of the class!

As a general rule of paw, mixed-breed dogs are cheaper to insure than purebreds.

Quotes we took from popular pet insurance companies show that insurance for a purebred Labrador can cost up to 20% more per month than for a mixed-breed Lab of the same age.

Over the course of your four-legged friend’s life, this difference can add up to a quite a few bones.

The reason mixed-breeds can avail of less expensive policies is that they’re less susceptible to hereditary conditions than their purebred cousins.

Canine hereditary disorders, such as cancer, are among the most common and expensive issues to treat.

Top Tip: Nowadays, pet owners have a variety of pet insurance companies to choose from when hunting for a policy to protect their pooch’s health.

It’s easy to compare what’s available-simply run your pet’s info through PetInsuranceQuotes.com and sniff through the results!

According to the ASPCA, about 75% of shelter dogs are mutts – a shocking disconnect from the 53% of US dogs whose genes are mixed.

It’s certainly not because they’re less suited to being family pets! Rather, mixed-breed dogs are way more likely to be born as a result of an unplanned pregnancy. In this way, some mutts seem practically destined to end up in shelters.

And once there, they often find it tough to find a forever home, due to often unfounded fears about their personality, the ‘prestige’ attached to owning a purebred dog, and a myriad of other reasons.

The American Humane Association states that 3 to 4 million dogs and cats are euthanized at US animal care and control facilities every year, meaning that millions of mutts are being born to die. In fact, euthanasia is the number one cause of death in dogs under the age of two years.

By opening your home and heart to a mutt, there’s a strong chance you’ll be saving his life.

Top Tip: In shelters, black dogs are routinely overlooked for their lighter-colored roommates. In fact, shelters even have a term for this phenomenon – Black Dog Syndrome. When looking for a canine friend, don’t pass by the darker dogs – you two might just be the perfect match.

6. Science Says You’ll Likely Have More Time with Your Mutt

“Dogs’ lives are too short. Their only fault, really,” said author Agnes Sligh Turnbull, in words that ring true with any dog owner.

The unique heartbreak that comes with saying goodbye to a beloved four-legged family member is one we’d all like to put off for as long as possible.

Researchers to the rescue: A 1997 Purdue University study of more than 23,000 dogs at North American veterinary teaching hospitals found that the “median age at death was lower for purebred dogs compared with mix breed dogs,” while separate studies conducted in Denmark and North America concurred. While there are outliers, mixed-breed dogs live an average of 14 years, while purebreds an average of nearly 10 years.

Top Tip: What do you get if you mix a Chihuahua and an Australian Cattle Dog?

A very long-living pup! Other breeds whose twilight years see them regularly hitting ages 14 and beyond include the dachshund, Yorkshire terrier, Siberian husky and beagle.

7. No One Regrets Getting a Mutt!

The figures don’t lie. In the 2010 National Mutt Census, which fetched responses from some 16,000 mixed-breed dog owners, almost 100% (99.7%) of respondents said they viewed their dog as a member of the family. Plus, some 48% said they shared a bed with their dog, meaning mixed-breeds make great snuggle buddies too!

And you don’t have to rely on the cold, hard stats either – just ask any owner of a mixed-breed dog! “The best relationship I ever had with a dog was with a rescue lab mix called Beau,” says Nick Braun, founder and CEO of PetInsuranceQuotes.com. “The love and joy he brought to our family’s life could not be measured. Thanks to Beau, I’m a proud and vocal advocate for mutts!”

Top Tip: While mixed-breed owners wax lyrical about their marvelous mutts, it doesn’t mean you should run headlong at a decision like a… well, a dog chasing a ball! Adding a new four-pawed member to the family is a big decision, and should only be taken after careful thought and consideration.

What’s in a name?

Why does the word ‘mutt’ have such negative connotations? ‘Mutt’ comes from the Middle English word for sheep, ‘mouton,’ which eventually morphed into the term ‘muttonhead,’ used to describe someone of questionable intelligence. In the late 1800s, this was shortened to mutt, used initially as both an insulting term for a person and a dog of hazy parentage.

It’s not just English-speaking countries whose language puts down mixed-breeds either. In Brazil and the Dominican Republic, mixed-breed dogs are dubbed ‘vira-lata’ (trash-can tipper), in Costa Rica they’re often called ‘zaguete,’ which derives from a Nahuatl term referring to scabies, while in Greece, the term for mixed-breed dogs comes from a word for ‘dung.’

Shining a Light on Mixed-Breed Superheroes

Ask many people to conjure up an image of an assistance dog and they’ll generally picture a wagging retriever or a twinkly-eyed Labrador. However, mixed-breed dogs can make super assistance dogs, bursting with important traits such as a desire to please, willingness to learn, stable-mindedness, intelligence, and loyalty.

In fact, many hearing dog programs have traditionally acquired their dogs, including mutts, from shelters, while organisations such as MedicalMutts.com get their soon-to-be service dogs (both pure-and mixed-breed!) exclusively from shelters.

Then there’s the mixed-breed stars who have made headlines nationwide for their achievements, like Sinbad, the US Coast Guard sailor-mutt who served the US for eleven years before retiring in 1948; Rufus, Target and Sasha, three mixed-breed stray dogs who prevented a militant from detonating explosives inside an American military base in Afghanistan in 2010; and Gander, a service dog who became the first ever mixed-breed winner of the American Kennel Club’s Humane Fund Award in 2014.

What a brave pack!

Scooby is a 9 month old Victorian bulldog who wasn’t getting along with the older male dogs in his original home. We believe neutering will help to some degree along with some patient training.

Scooby is looking for a home with either mellow females or no other dogs or cats. Scooby is full of affection and loves to play and wants your attention. He’s potty trained and crate trained although, if you are home, he wants to be with you.

Scooby loves kids but he is a bundle of energy and is apt to jump up so a home with bigger kids is suggested. Scooby doesn’t do well with new male dogs and he needs to work on his play with other dog skills. Scooby will be a great bully for the right family!

One response to “7 Reasons to Adopt a Mixed Breed Mutt”