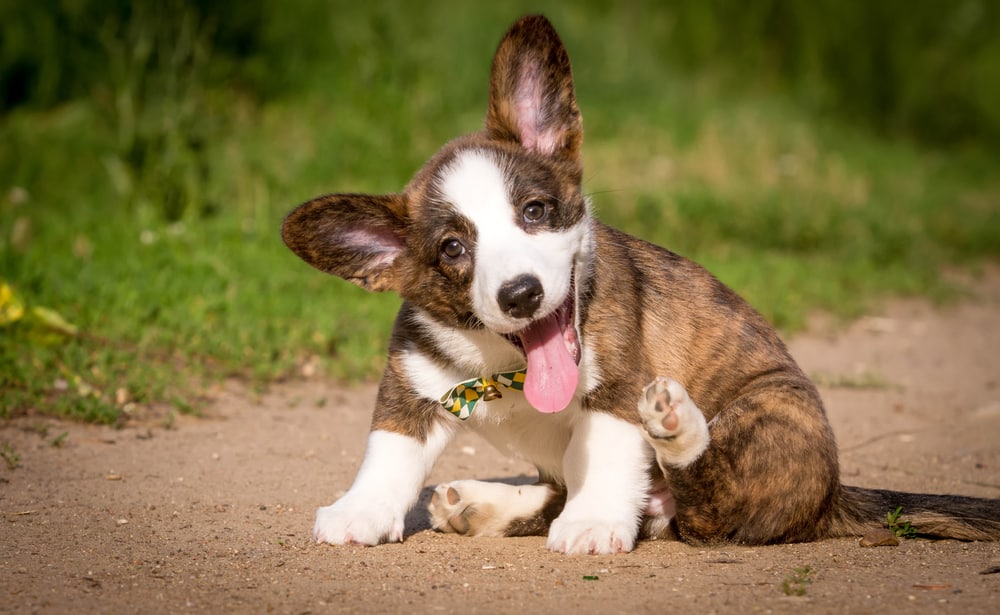 The brilliantly named Cardigan Welsh Corgi is a short but strong dog of European descent, which first tasted the vitalising US air in 1931, when it was introduced to the State of Massachusetts. Initially, there was some difficulty in the general population in distinguishing between the Cardigan corgi, and its closest cousin, the Pembroke Welsh Corgi, probably because for a long time they were considered to be the same breed.

That was until 1934, when the British Kennel Club decided to recognise the two as distinct from one another – an easy way for us to tell the difference is to look at the tail! The Cardigan Welsh earned its name for having such a glorious cardigan-sleeve-like tail, whereas the Pembroke Welsh, named after its place of origin – Pembrokeshire, Wales – has virtually no tail at all!

A year after the British Club did so, the American Kennel Club (AKC) officially accepted the breed into their annals, and from then on, the popularity of the Cardigan Welsh corgi began to soar. Since then, members of this distinguished breed have numerous times won the Best in Show awards in all breed competitions.

A summary of energy requirements

Many people say that the best qualities of their Cardigan Welsh shine in their curiosity, intelligence, and especially their kindness and playfulness. This breed is easy to love and easy to be loved by – quite the perfect relationship! Physically, this breed is one of spectacular energy and endurance, such that it is wise to go walking with it for around a mile a day.

This might not have surprised you, if you were already aware that it was until relatively recently often found working with farmers, driving cattle to market, and in some circles it was even trained for hunting badgers, and small rodents!

I recommend that you judge how much food your precious corgi will need to meet its energy requirements by getting to know it well – judging its weight, activity and attitude towards meal times – but a good guideline for an average Cardigan Corgi approaching 2 years is 2.2 cups of high quality feed.

If you suspect your corgi is getting overweight, feel for its ribs – if they can be easily felt, but do not protrude too much, you need not worry. However, if they’re definitely obscured by some layers of fat, it might be a good idea to cut down on the quantity of food in its bowl. Too skinny, well, you know the deal.

Well looked after, these cute, smart, strong little delights live an average of 12-15 years, though with an attentive eye and access to great healthcare, they may well exceed this!

The Cardigan Welsh corgi is low set, long, deep-chested and has pointed, fox-like ears and and a bushy, foxy tail. Its famous hair radiates various patterns and hues. Some of the most popular are the brilliant grey-blue-merle, the subtle red and the beautiful brindle and white.

The hair covering this breed is of slightly above average length and density, and is really quite straight. Maintaining this dapper look requires a pampering brushing about once a week, or more if your dog is the rough and tumble type. A light trim around the feet might help to reduce the amount of dirt that a corgi will bring in from outside. This hair is thought to be something which it shares to some degree with its quite close relative, the Pomeranian.

Corgis of both sexes can reach about a foot tall once full grown, though a male of the same height as a female is likely to weigh a few pounds more. Mature females average about 29 lbs while males generally end up around 33lbs. Of course, during the course of pregnancy the tables might even-out or perhaps actually turn in this respect!

What could go wrong?

The Cardigan Welsh corgi is a hardy breed – one of strong descent; it is actually believed to have sprung from the same stock as the spritely and tough dachshund not all that long ago. Although the corgi is indeed generally considered a breed well capable of maintaining good health, resilient as it may be, it is still fallible.

There are a few health issues which are known to be most common for the breed. Progressive retinal atrophy (PRA) is a particularly common affliction due to its genetic and thus hereditary basis. This is something which wary, caring corgi owners ought to regularly screen for. Another field in which the Cardigan Welsh corgi is known to be more commonly diseased is physically.

Hip dysplasia and degenerative myelopathy – damage to the spinal cord – are unfortunate consequences of the corgi’s slender, low down physique, and its happy, lively nature. One way to lower the risk of these latter two occurring in your beloved corgi is to try to stop it from jumping off of any tall beds, or other high places, because these acts stress the joints unnecessarily.

In order to avoid unexpected medical fees in the future, and the emotional toil which is sure to accompany them, insuring your corgi as soon as possible is highly recommended. Not only does this eliminate the chance of any unpleasant fees, it also ensures that all important peace of mind. It seems so obvious an idea that I was shocked to find out that in the US, only about 1% of dogs are insured, as opposed to as many as 40% in some places in Europe.

Surely, there should not be so gaping a difference! We love our dogs as much as they do, right?

How social can a Cardigan Welsh corgi be?

Well, that depends on your corgi! According to many sources – official and anecdotal – it’s key for your corgi’s happiness to make sure that as it grows up, it meets as many new and different environments and people, and other animals, as is possible. This ensures that your dog will be less easily provoked to discomfort on registering new and unknown, and as a consequence uncomfortable, entities.

This will somewhat decrease the volubility of the corgi, and will increase its overall affability with those who come to meet it. Less noisy barking, a lower chance of misbehaviour, and a general increase in sociality.

So yes, this breed is known to be particularly social, and so satisfying that drive, and doing so regularly and informally, will be sure to heighten the contentedness of your corgi, and by default, as a result of that, the contentedness of you, its best friend, and that of any future friends it comes to meet! Training a corgi early on is key.

Taking it to training classes can help with this process if you are struggling to meet the targets which you set for yourself.

A Cardigan Welsh corgi will be only knowable fully to you, dear pet parents. However, there are some well researched standards and guidelines as regards feeding times and quantity, physical dimensions, exercise requirements, sociality, healthcare and more, of which it is important to be aware so that when you’re walking the path of discovery with your corgi, there is a light switched on above, so that not all is dim and so that you are not walking blindly into the darkness – how much of a shame it’d be to bump into something unannounced like that, especially if it could have been avoided with a bit of preparatory research!

We hope that by reading this blog post you have learned what you wanted to know about Cardigan Welsh corgis, and of course, being that I am not claiming this to be a completely comprehensive detailing of all you could possibly ask about this breed, I do suggest you look at some of the links I have shared with you in the preceding text. I gained valuable knowledge from them, and I’m sure you’ll be able to find some too! And now, having finished writing this post, I’m going to go and walk my dog. Happy pet-parenting!