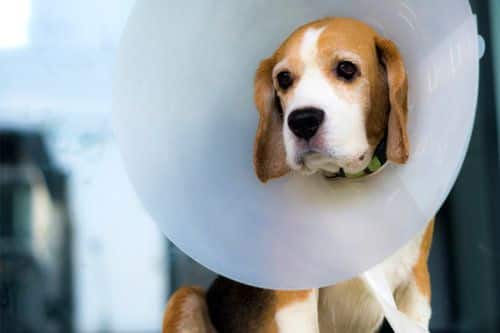 Cryptorchidism is the scientific term for when a dog’s testicles (either one or both) do not descend. This is also known as retained testicles or undescended testicles. Simply put, the testicle(s) are not in the sac or scrotum like they are supposed to be. This may seem like a natural occurrence that doesn’t give cause to a lot of concern. Yet, this is a serious issue that can cause serious problems if not corrected.

Here is more on cryptorchidism in dogs. What it is, what causes it, the symptoms, complications, and how it is corrected.

What Exactly is Cryptorchidism in Dogs?

According to VCA Hospitals in an article by various veterinarians:

It is a genetic disorder that happens in some dogs and can be passed along to offspring by the father, if he is not sterile himself. The disorder is indicative of nonexistent or incomplete testes descent.

For dogs without this disorder, the testes descend into the scrotum on their own. This happens when the dog is at a young age. In fact, this should have happened by two months of age. In some dogs it is six months but this is not the norm.

In this disorder, the testicles are not in the scrotum. Instead, there are two places – the inguinal canal or the abdomen. An inguinal canal is the area through which the testicle should descend. It’s the passage that is located through the abdominal wall that goes into the region on the genitals.

In some cases, there is another area the testicle may be. This is in the groin area under the skin, called subcutaneous tissue. The area is similar though; it is still located between the scrotum and inguinal canal.

While this can happen to any male dog, there are certain breeds that it seems to happen more often. It seems that smaller dogs like miniature or toy dogs have more instances of cryptorchidism.

Why Does It Happen?

This is a genetic condition that is passed along. This is why it is important not to breed a dog with cryptorchidism because the genes are passed along. In some cases, the male dog with this genetic disorder cannot breed anyway due to being sterile. This is mostly found in dogs with bilateral cryptorchidism. What this means is that both testicles did not descend and in many cases, the dog cannot reproduce because sperm cells cannot form properly. This is due to the body’s temperature being too high.

Some research shows that it may not be caused by genetic factors. Instead, it may be an anomaly that affects one puppy out of a litter due to something that happened during pregnancy.

Whether it is hereditary or it is environmental, there is no way to prevent it from happening. The dog owner simply has to treat it if their dog has it. The only way to ensure that another dog does not get it is to not breed under any circumstances.

What Complications Does It Cause?

According to Pet MD:

This condition is rarely associated with pain or any other sign of disease. However, acute onset of abdominal pain generally indicates that the spermatic cord of the retained testes has become twisted, cutting off the blood supply to the testis. Many times, this testis will develop tumors, which is symptomized by feminine behavior. The risk of testicular cancer is thought to be approximately ten times greater in affected dogs than in normal dogs.

There is also the risk of what is called testicular torsion. This is when the testicle is not attached. While this is a rare occurrence, it does happen sometimes and is painful to the dog. When this happens, it is often hard to diagnose, too.

How is It Diagnosed?

Finding out if a dog has cryptorchidism is pretty simple but is more than just a visual check. Abdominal ultrasound or radiographs (X-rays) allow the vet to see where the testicle is located in the dog’s body.

In some cases, a hormonal test can be done. This is when a male dog seems to have female behaviors or the dog does not have testicles yet acts like a male. This hCG test is ideal to determine if the dog is neutered.

There is a test that is less complex where your veterinarian can check for penile spines which are dependent on testosterone and will disappear 6 weeks after neutering.

There is one instance where a physical examination can identify this disorder. This is when the testis is in the inguinal canal. It is when it is in the abdomen deeper than X Rays or an ultrasound is needed.

What are the Statistics?

This disorder affects about 1 – 3 percent of all dogs. As mentioned, any breed of dog can get it. Yet, smaller, toy, and miniature dogs have it more often. These at-risk dogs include Yorkshire Terriers, Pomeranian, and Poodles. Most cases only involve one undescended testicle. This is in about 75 percent of the cases of cryptorchidism. The other 25 percent is when both testicles do not descend as they should.

What are the Symptoms?

The symptoms for cryptorchidism aren’t always so easily seen. There shouldn’t be pain unless there are complications. One such complication is spermatic cord torsion. This is when the testicle twists onto itself. This particular symptom can cause bad abdominal pain that seems to come about suddenly.

Another complication is cancer. The testicular cancer is actually more common than spermatic cord torsion, which is more rare.

Infertility is yet another symptom of this disorder. This depends on if one or both testicles did not descend. If both are undescended then the dog will be infertile. If only one descended then it can continue to create testosterone but not sperm.

One symptom that is noticeable is that one testicle is quite smaller than the other when one is retained. And as mentioned before, if a dog is exhibiting male behavior with no sign of testicles, this is an indicator of cryptorchidism.

What is the Treatment or Correction for Cryptorchidism?

There are a few things you should ask your vet when seeking treatment for your dog’s cryptorchidism.

The neutering brings us to this treatment plan. If your dog has this disorder, he should be neutered. According to Pet Health Network:

The only treatment is to have your dog neutered (i.e. both testicles removed). A cryptorchid neuter is a more involved surgery since it may involve an incision in the abdomen and a longer surgery time. Your veterinarian may recommend an overnight stay depending upon the specific procedure. Your dog’s recovery takes approximately 10 -14 days and requires restricted activity.

It is imperative to keep your dog quiet and restful after this procedure. This ensures that he will heal faster. An Elizabethan collar helps keep the surgery area from being chewed or licked during healing, which is also important.

One thing to be aware of is a process where the veterinarian tacks the testicle that is undescended into the scrotum. This is not a procedure that is ethical and should never be done.

While some people may not want to neuter their dog, it is important for those with this disorder. This is because it eliminates the genetic defect and the dog’s lineage won’t have it passed down to them.

Another reason is that these dogs will still have the same characteristics as those that are intact. This means dealing with aggression, urine marking, and more.

But the most important reason to neuter is that there is a 10 times greater risk for a dog with cryptorchidism to develop testicular cancer.

The main thing is that if your dog has this genetic disorder, it can be treated. Dogs that have this routine surgery early in their lives have an excellent prognosis. There are complications with the disorder but not typically if it is caught early and the dog is neutered.

While you may not want to neuter your dog, it’s for their own good. Not only does it make the dog healthier and less likely to have complications but it doesn’t pass long this genetic marker to offspring.

Cryptorchidism is not a death sentence but with a diagnosis, it should be treated by a professional.