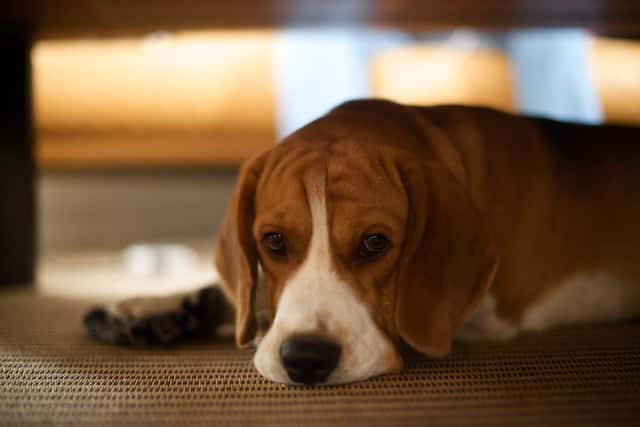 Pica is a psychological condition that affects dogs and causes them a habit of craving to eat non-food items. Pica is a fairly common occurrence in canines and is characterized by eating items such as cloth, rocks, dirt, plastic, and other indigestible objects. This condition is usually caused by psychological issues but can also be caused by poor nutrition and other medical problems.

It is important to note this behavior early because the ingestion of non-food items can block the digestive system of your dog. Other problems such as poisoning, choking, and even death can result from Pica if it is not detected early and treated.

Symptoms of Pica in Dogs

The most common symptom of Pica in dogs is eating or craving to eat non-food objects. Other symptoms might manifest as a result of ingested items. Symptoms might vary from dog to dog depending on which items or objects they have swallowed the most.

Other symptoms can be as a result of bacterial, toxic, and poisonous content from the non-food items that your dog has ingested. These symptoms occur over time and might include:

Causes of Pica in Dogs

There are 3 known causes of Pica in dogs, which include behavior disorders, medical conditions, and pet medications which increase your pet’s appetite at abnormal levels. In most cases, Pica is caused by psychological problems that require behavior modification. In other instances, Pica is just a manifestation of normal exploratory behavior in pets.

Whatever the cause might be, it is necessary to get veterinary treatment for your pet to assess why your dog is engaging in such habits and to get the appropriate treatment.

Below are the 3 major causes of Pica in dogs:

Dogs are naturally playful with their masters as this helps them to learn motor skills, prepare for unexpected situations, as well as to enable them to build social cohesion. When you are not playing with your dog, it might turn to attention-seeking stunts such as eating non-food items. If your dog is left alone with little or no play, it is more likely to develop Pica as it tries to distract from its loneliness.

Lack of Physical and Mental Stimulation

Sometimes, it can be challenging to understand dog aggression and frustration. There are various reasons for frustration and aggression in dogs, but mostly, the reasons are that a dog is not treated correctly at home. When a dog is mistreated at home, it causes them confusion and aggressiveness, and the only distraction available to them is eating non-food items. When the mistreatment is consistent, a dog develops a habit of ingesting non-food objects, and this develops to Pica.

Diabetes in dogs can cause abnormal appetite levels, which causes the dog to eat even non-food items. Dogs with diabetes also suffer from excessive thirst, weight loss, increased food consumption, and increased urination. Symptoms of Pica might be evident that dogs are suffering from sugar diabetes (Diabetes Mellitus).

Pica in dogs can result from scurvy, especially iron deficiency and anemia. When the dog’s body is trying to rectify a shortage of nutrients, dogs might crave eating non-food objects. The habit of eating non-food items searching for deficient minerals and vitamins results in Pica and can only be treated by adjusting the dog’s diet.

IBD is a syndrome that is characterized by chronic irritation of the intestinal tracts. Most dogs that suffer from IBD have recurrent vomiting and diarrhea, which causes the dog to be hungry most of the time. IBD can cause dogs to eat non-food items as they seek to compensate for the food that they have been lost when vomiting.

Otherwise known as gastrointestinal cancer, stomach tumour in dogs is a significant cause of Pica in dogs. It is characterized by a tumor of the glandular tissue that grows towards the stomach and other digestive organs. Dogs with stomach tumour at its advanced stages develop Pica because, at these stages, they have lost appetite to food and they also experience intense abdominal pain. As a way of distraction from the pain and loss of appetite, dogs develop a habit of eating non-food objects.

In other instances, if your dog is under medication, it might develop Pica as a result of severe side effects from the medication. Pet drugs such as anti seizures and corticosteroids have side effects that affect the digestive system. Side effects could include vomiting, nausea, and constipation. A dog under these types of medication might turn to eat non-food objects trying to compensate for the food they’ve lost during diarrhea and vomiting. Prolonged use of this kind of medication for your dog might cause Pica as the dog’s appetite will mostly be at abnormal levels.

Treatment of Pica in Dogs

For psychological behavior issues, your veterinary would usually recommend increased mental and physical stimulation for your dog. These can include taking your dog for long walks, being playful, and socializing with your dog to reduce stress, boredom, and frustration. If you are generally busy and lack time for socializing with your dog, it is highly recommendable to take your pet to doggy daycare. Other ways to keep your dog busy and active is by buying durable chew toys to divert its attention from ingesting non-food items.

For severe behavior disorders, it is appropriate to seek the help of professional pet behaviorists. Pet behaviorists can advise accordingly on how to treat your pet to avoid it from developing attention-seeking behavior and anxiousness.

If the Pica is caused by medication, it is advisable to contact your veterinarian who should advise if the medication should be discontinued. If the causes are mainly malnutrition, you should put effort into ensuring appropriate dietary changes to compensate for the nutrient and mineral deficiency.

Recovery of Pica in Dogs

Follow-up visits to your veterinarian or pet behaviorist are necessary to ensure your pet is positively progressing in their recovery from Pica. If the Pica was severe and the pet is suffering from intestinal and digestive blockages, you should consult your veterinarian for a surgery visit to remove the sutures. If the underlying cause for Pica was a medical condition, follow-up visits should be consistent to ensure the dog is healed from the disease.

Pica is a serious and silent killing condition that obstructs the digestive system. Pica can also lead to respiratory and gastrointestinal blockages, which might need surgery to clear the obstruction. Whether the cause is medical, medication, or behavior disorders, the best idea is to remove indigestible objects and items from your dog’s environment, so the dog doesn’t feel compelled to eat them. It is advisable to have pet insurance to avoid the massive veterinary bills that come with the treatment of Pica in dogs.