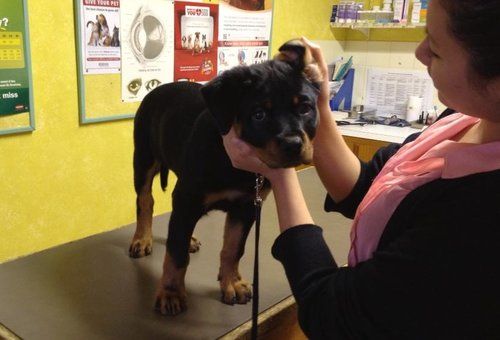 Juvenile renal disease (JRD) in dogs is typically caused by a hereditary or developmental abnormality. Unfortunately, the majority of patients are diagnosed before they are four to five years of age, with many cases occurring before a dog is one year old.

This disease causes one or more kidneys to develop abnormally, resulting in reduced function and possible kidney failure.

There are numerous types of renal disease in dogs, including renal agenesis (the failure of kidney formation), polycystic kidney disease (caused by the formation of multiple cysts), glomerulopathy (impacting the small blood vessels in the kidneys’ functional unit), and renal dysplasia (associated with the abnormal or incomplete development of the kidneys).

These diseases may be caused by:

When puppies are impacted with JDR, the cause is typically hereditary. Affecting approximately 20 breeds, including Boxers, Cocker Spaniels, Chow Chows, Shih Tzus, and Lhasa Apsos, and most recently, Golden Retrievers, juvenile renal disease is most often caused by a single recessive gene. This means that an affected puppy’s parents will both be carriers.

Early warning signs will differ from the symptoms that present themselves later on, once the disease progresses. While the majority of dogs will develop JRD at approximately 2 years of age or less, clinical signs may not become apparent until later in life.

During the early stages, dog owners may notice that their dog is drinking an abnormal amount of water, displaying greater thirst than normal. This may not be overly obvious at first, especially if there is more than one dog in the household.

A dog’s urine will also provide clues, as they may urinate more frequently and when they do, the urine will be fairly diluted. In some cases, a puppy may also leak urine.

Over time, symptoms will become more obvious and severe, including the following:

Unfortunately, clinical signs may not present themselves until over 75 percent of the dog’s kidney is affected.

If possible, early intervention is critical for affected dogs.

In many cases, affected dogs will show reduced growth in comparison to the rest of the litter. Sadly, these dogs will often die within the first year of their life due to kidney failure.

Like many health conditions, the severity of juvenile renal disease in dogs will depend on a number of factors, including the number of abnormal nephrons and the underlying cause (i.e. maldevelopment).

Unfortunately, there is no cure for diseases such as renal dysplasia. However, symptomatic treatment may be suggested based on a dog’s condition. Owners will need to work closely with their veterinarian in order to create the best possible treatment plan for their dog. One or more of the treatment options may be recommended:

Dogs living with a mild form of JRD will benefit from lifelong kidney support and monitoring. Be sure to protect your dog – especially if you own a breed that is commonly affected by JRD. Get coverage today!