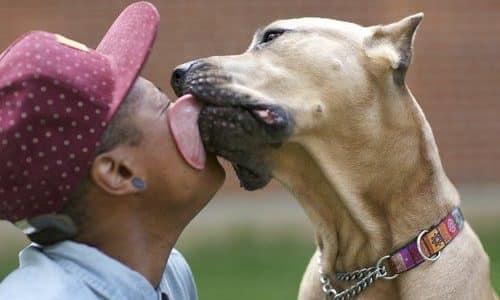 Most cases of liver shunt in dogs are congenital, meaning that dogs are born with the condition. In some situations, though, high blood pressure or hypertension can contribute to acquired liver shunts.

Liver shunts don’t always create observable symptoms. Over time, though, problems with toxins and digestion usually cause symptoms like:

Breeds With a Risk of Liver Shunting

Liver shunts tend to appear in some dog breeds more often than they do in others. This suggests that genetics plays a role in whether a dog will develop liver shunting. At this time, however, researchers have not identified the specific genetic basis of liver shunt in dogs.

Ongoing may reveal more information about the genetics that contribute to liver shunt. Until then, dog owners should know that the condition appears most often in breeds like:

Many dogs with liver shunts look and behave normally. They don’t always show any of the common symptoms of liver shunt. Because of this, most owners learn that their dogs have shunts when veterinarians before blood work for other medical reasons. Blood panel results that show abnormally high levels of toxins, such as ammonia, indicate that dogs may have liver shunts or other liver conditions.

Veterinarians can confirm their suspicions with abdominal X-rays, ultrasound, or other imaging options.

Surgical treatments may correct structural problems that cause liver shunt in dogs. Surgery adds tubes that direct blood from the abdominal system to the liver. The liver can then remove toxins from the blood before passing it on to the circulatory system.

Reducing the Symptoms of Liver Shunt in Dogs

Only surgery offers a solution to liver shunt in dogs. Some treatments and lifestyle changes, however, may reduce the symptoms of liver shunts.

Changing a dog’s diet often has the most noticeably positive effects on the symptoms of liver shunts.

Dogs with liver shunts can have trouble processing proteins because their livers never have a chance to filter the byproducts of digesting protein. Switching to a low-protein diet may reduce some liver shunt symptoms.

Finding a diet that reduces symptoms may require assistance from a nutritionist. Owners should talk to their veterinarians to find nutritionists with experience developing diets for dogs with liver shunts.

Liver shunt in dogs is a serious condition, but it responds well to surgery and other treatments. It may take some time before owners find solutions that reduce or eliminate symptoms in their pets.