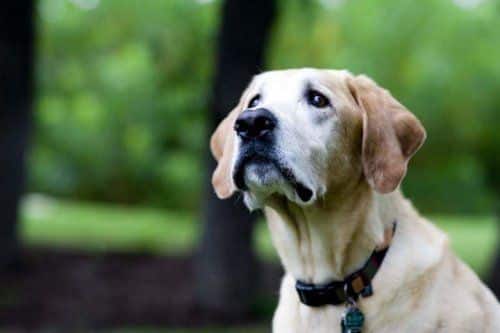 Unfortunately, stomach ulcers in dogs are not uncommon and can be caused by several underlying health conditions, medications, an unbalanced diet, or stress.

Unlike humans, dogs cannot tell us what they’re experiencing. This means that the true incidence of stomach ulcers in dogs is not entirely known. However, since more and more animals are being administered non-steroidal anti-inflammatory drugs (NSAIDs), one of the most common predisposing factors, the incidence in dogs is believed to be increasing.

What Are Stomach Ulcers in Dogs and What Causes Them?

A stomach (or gastric) ulcer is a sore or lesion in the lining of the stomach, often referred to as the mucosal barrier). This lining is what protects the stomach from sustaining damage caused by gastric acid. In many cases, lesions extend deeper than this lining, resulting in pain and other possible complications.

Stomach ulcers are found in both young and adult dogs. However, a higher percentage is typically found in mature dogs. This is particularly true among athletic breeds.

As stated in this 2016 review, stomach ulcers are a common cause of mortality in canine athletes, most notably racing sled dogs. Working dogs also face an increased risk. As reported in this review, a study found that retrievers used for off-leash explosive detection work (where dogs may be exercising intermittently for up to 9 hours a day), had an 84 percent prevalence of clinically severe stomach ulcers after five consecutive days of exercise. This means that any dog that performs strenuous exercise is at an increased risk.

However, the most common causes of stomach ulcers in dogs include the administration of certain drugs, such as NSAIDs, as well as pre existing diseases like cancer and liver disease. For example, mast cell tumors can increase a dog’s risk of stomach ulcers as a consequence of increased circulating histamine levels.

An excessively fatty diet may cause stomach ulcers in dogs, as fatty foods tend to sit in the stomach for longer periods of time. To break these foods down, a build-up of stomach acid occurs as a result, increasing the risk of ulcers.

Warning Signs and Complications of Stomach Ulcers in Dogs

The most common clinical sign of stomach ulcers in dogs is vomiting, which may or may not contain blood. If blood is present, it may appear fresh and red in color. In other cases, the blood may be digested, creating the look of apparent coffee grounds. However, this symptom does not necessarily indicate that a stomach ulcer is the cause of bleeding.

Other common warning signs include:

If an underlying disease is linked to the development of a stomach ulcer, clinical signs attributed to that condition should also be addressed (i.e. signs of liver disease or renal failure).

Unfortunately, dogs with stomach ulcers may experience chronic, low-grade blood loss. This may not be overly apparent at first but may result in anemia.

How to Diagnose Ulcers in Dogs

If a stomach ulcer is believed to be the cause of specific symptoms, a veterinarian will take a detailed history and conduct a physical examination. At this point, routine testing will be recommended, focusing on the dog’s blood count, urinalysis, and biochemistry profile.

An ultrasound can determine whether or not any foreign body or mass is present in the stomach or duodenum. However, endoscopy remains the gold standard for the diagnosis of stomach ulcers in dogs. This minimally invasive method allows veterinarians to achieve visualization of a suspected ulcer.

Opting for this method of choice will not only lead to a more definitive diagnosis, but an endoscopy also allows veterinarians to take a biopsy. No biopsy should be obtained from the center of an ulcer, as it can be easily perforated. Instead, samples are taken from the edge of the ulcer in order to rule or neoplasia (an abnormal mass of cells, which may be cancerous).

Treatment for Stomach Ulcers in Dogs Depends on Severity

There are a number of potential treatment options available, which depend on the severity of a dog’s condition. For example, if an ulcer has perforated the stomach wall, surgery will likely be required. In cases where a dog has been excessively vomiting, they may need intravenous fluids in order to restore hydration.

Each dog’s treatment plan will depend on their situation and the underlying cause of the ulcer. Most often, a veterinarian will prescribe an antacid medication, reducing the amount of stomach acid in order to promote healing. This will be accompanied by specific dietary changes.

Food is typically withheld initially and most often, a bland, low-fat diet will follow, introduced in small portions. However, each individual case is unique, especially if other underlying health conditions are present.

Medications will likely be prescribed to reduce gastric acid secretion. These often include H2 receptor blockers. Antibiotics will also be prescribed if an infection has developed.

Please note: It is critical to never use over-the-counter pain-relieving medications without first discussing options with a veterinarian, as select medications can further aggravate ulcers.

A complete resolution will depend on the underlying cause of the ulcer and will likely require a combination of treatment methods.

In patients with life-threatening hemorrhage or hard-to-treat ulcers, surgical procedures will likely be required, which are often performed by specialists. In this case, stomach ulcers in dogs can be costly.

Veterinary treatment for stomach ulcers, particularly performed by a specialist, can cost hundreds and even thousands of dollars. Pet insurance helps pay veterinary bills so you can provide the best care possible for your puppy or dog without worrying about money.