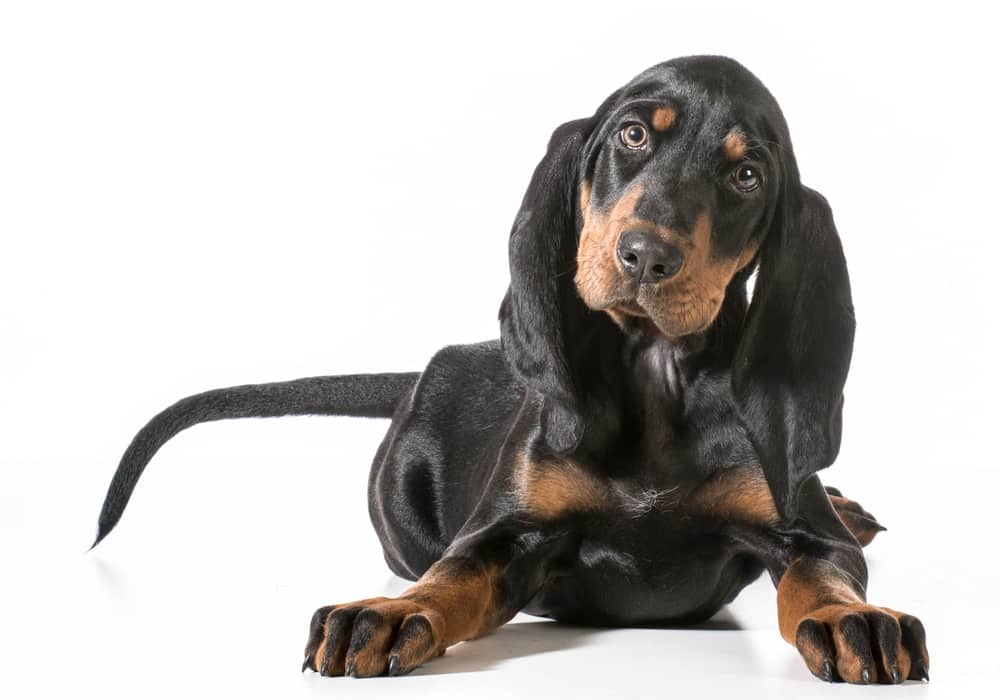 Black, tan, floppy-eared, and equally at home on the trail as stretched out on the sofa: that’s the Black and Tan Coonhound. A truly American breed, these hunting dogs are woven into the fabric of U.S. history.

The history of B&T Coonhounds explains the name of the breed. As Americans settled the New World, the raccoon quickly emerged as an integral ingredient in frontier survival. These plump, night foraging creatures became a steady source of meat, fat, and fur for early Americans moving into the continent’s interior.

Those who expanded west and south after the American Revolution to carve a life out of the wilderness soon discovered a problem: there were no dogs equipped to face the challenge of hunting raccoon. There were the foxhounds of the landed Southern gentry but these dogs didn’t perform well in the often rugged terrain.

Rising to the challenge, American ingenuity kicked in, and the frontiersmen crossed European foxhounds with bloodhounds. The result? A uniquely American breed – the coonhound. These hounds could trail raccoons through thick forests and swamps with nothing more than moonlight and their incredible sense of smell to guide them. When they ‘treed’ their quarry, they began their unique throaty, musical baying to call their rifle-toting hunters to their location.

Raccoons are not the only prey this breed will track down. They are equally as adept at chasing down deer, bear, wild hogs, and mountain lions. “Nite hunts”, misspelling intentional as a way of giving recognition to the frontiersmen who developed the sport and the breed, continues as a traditional method of hunting in Southern states of the U.S.

B&Ts became the first coonhound registered by the American Kennel Club in 1945.

The Black and Tan Coonhound is a fast runner, with an easy gait. Their floppy muzzles and long, droopy ears make for quite the show when they’re running full throttle. Their acute sense of smell, along with their ability to track a ‘cold’ scent (the trail of a long-gone animal,) explains their value to the early American colonial settlers and the sportsmen hunters of today.

Their coloring is as their name suggests: black and tan. They carry characteristic seed-shaped patches over their eyes, and their orange markings at the muzzle and on the legs are a sharp contrast to their coal-black coats. These medium-sized and moderate-energy dogs can live as long as 10 to 12 years. They range in height from 25 to 27 inches for males 23 to 25 inches for females. Weight ranges from 60 to 110 pounds for both males and females.

These dogs love to sing. Whether they’re chiming in with their deep-throated bark or they’re serenading the neighborhood with the historical, deep, musical baying of a coonhound who’s treed its quarry, there’s no mistaking the very loud, very distinct call of the Black and Tan Coonhound.

A B&T is independent by nature and has a sense of humor. They are family-friendly, particularly if the family is the outdoorsy, active type. They make loving companions and tend to be playful, gentle and laid-back when at home. They would prefer the wide-open spaces where they can run and practice their inherent hunting abilities, but they also make an excellent running or jogging partner. The Black and Tan is flexible, however, being equally as satisfied with a good daily walk, as long as there is a generous amount of sniffing time allotted.

When you get home, it’s highly likely that your coonhound sacks out on the sofa, in or as near to your lap as possible. They’ll gladly take all the petting and cuddling you want to dish out. B&Ts are good companions with children and enjoy playing with them. They tend to get along well with other dogs and even cats if introduced properly.

B&Ts are good watchdogs, sounding off with their resonating, deep bark if something is amiss around the house or strangers are lurking. While their size does make them an intimidating figure, they are unlikely to bite or become aggressive toward anyone.

There are drawbacks, of course. A B&T is a hound, and he smells like one. If you’re not into that faint ‘houndy’ odor, the Black and Tan is probably not for you. They also drool, but only at certain times, usually when it’s hot, after they drink water or eat something, when they bark. They also shed – heavily.

Black and Tan Coonhounds don’t do well when left alone in confined spaces. Alone in a small apartment, for example, they may bay for hours because of separation anxiety, much to the chagrin of your neighbors. Or they may become destructive as a way to pass the time while you’re gone. Crates are really not their favorite thing, either, and they don’t do well when confined in them.

The B&T breed is a hunting breed; that’s what they’re bred to do. Because he is a scent hunter, he’s easily distracted by different smells. Once he’s decided he needs to follow a scent, you’ll have a hard time calling him off it. If you’re not in a place where he can follow the trail freely to wherever it leads, this hound will need a yard with a high fence or a leash when out and about.

Caring for your B&T

Because their coat is short and dense, a Black and Tan Coonhound is easy to groom, but they do shed heavily. Add frequent brushing and bathing into your pet’s routine. Luckily, their dense coats slough off most of the dirt they encounter. Also, keep some pet-friendly wipes handy to take care of the Black and Tan’s drool.

These dogs are hearty and healthy for the most part. The main concern is keeping the big, floppy ears clean. They are prone to bacterial infections and yeast problems. If your dog takes a dip, be sure to thoroughly dry the ears afterward.

Most Black and Tans do well on high-quality, commercially manufactured dog food. You can, of course, opt for home-prepared meals for your pet. Make certain the diet is age-appropriate, and keep in mind that B&Ts are prone to being overweight. Keep an eye on your dog’s weight. They love treats but these can be a contributing factor to obesity, so make certain to dole them out for training purposes and then sparingly after he’s trained. Of course, there should be clean, fresh water available at all times.

Overall, the Black and Tan Coonhound tends to lead a long, healthy life. There can be problems with the skin if the coat isn’t properly brushed and bathed. They may become overweight and anxious, nervous, and stubborn if they’re forced to be inactive for long periods.

Some common health issues that may arise include:

Your veterinarian can test for these conditions in your pet.

A Black and Tan Coonhound is a proud breed with a long history steeped in American lore and tradition. A B&T is a hard-working, dedicated tracker who loves to roam and run. Once on a scent, he can run for hours without looking up.

As a family pet, they are lanky, goofy, fun-loving, playful and affectionate companions. They’re good with children and other pets, and can even warm up to cats when properly introduced to them. They’ll sound off if they perceive something amiss around the home or something seems threatening to their family. A B&T is as at home in the woods and swamps as he is lounging on the sofa with you while watching TV.

Sleek, midnight black coat, and drooly, the Black and Tan Coonhound is an all American dog that can fit into just about any family that’s willing to accommodate his quirks. (Did you read the part about the drooling?)

Just like any other family member, there are going to be medical bills. All dogs need routine care under the supervision of a veterinarian. But potential cost of a vet bill doesn’t have to be a prohibitive factor in adding a Black and Tan Coonhound, or any other dog or cat, to your family. You can now choose from a variety of medical insurance for your pet. Simply click HERE to let Pet Insurance Quotes help you find the right policy for covering your family’s pet.