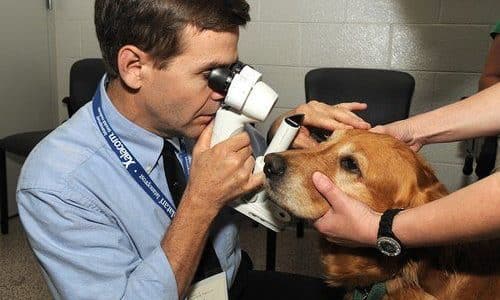 Ectropion in dogs is an eye defect that causes the eyelids to droop or roll outwards. Eyes afflicted with ectropion often experience irritation because they aren’t adequately protected from dry air, pollen, dust, and other irritants.

Although ectropion in dogs doesn’t put the animal’s health at risk, many owners seek treatment options so they can prevent discomfort.

Ectropion in dogs is essentially the opposite of entropion, a condition that causes the eyelid to fold inward toward the eye. Entropion also causes irritation, but it does so by rubbing fur against the eye’s surface.

Causes of Eyelid Ectropion in Dogs

Several genes seem to contribute to eyelid ectropion. Dogs are often born with the disorder, although the symptoms may become more pronounced as animals age.

Ectropion may also occur as a side effect of facial paralysis. When paralysis prevents muscles from pressing the lower eyelids against the eyes, the skin can fold outwards.

Since eyelid ectropion has genetic causes, some breeds are more likely than others to develop the condition. Breeds with a high risk of getting ectropion include:

Some animal advocates warn against purchasing dogs from breeders that intentionally choose parents with prominent eyes. If the parents of a puppy have high risks of developing eyelid ectropion, then there is a good chance that they will pass the trait on to their offspring.

Symptoms of Ectropion in Dogs

Ectropion in dogs doesn’t cause any harm, but it does make it more likely that animals will develop other problems. Some of the symptoms and long-term effects of untreated ectropion in dogs include:

Ectropion may look alarming, but it rarely causes significant health problems for dogs.

In most cases, veterinarians can diagnose ectropion by merely observing a dog’s eyes. If the dog has drooping, everted eyelids, then it almost certainly has ectropion.

Veterinarians might use other diagnostic procedures to determine whether dogs have bacterial infections or other problems related to ectropion.

Treatment Options for Ectropion in Dogs

The treatment options for ectropion in dogs vary depending on the owner’s goal. If the dog experiences infrequent bacterial infections, then applying an antibiotic-corticosteroid can usually eliminate bacteria and reduce swelling. Decongestants may also help control the symptoms of ectropion.

Surgery is the only permanent solution to ectropion in dogs. The surgical procedure shortens the lower eyelid to prevent drooping that expose eyes to the environments.

After surgery, owners must make sure that they keep the affected area as clean as possible. Once the treated area heals, the dog shouldn’t have any trouble with ectropion.