Blue Picardy Spaniel is a medium to a large-sized sporting dog with a solid body, hard-working personality, calm-temperament, and well-balanced personality. This spaniel breed is known for thriving off of human companionship and physical activity. With a special love for children, this breed makes for a perfect choice when seeking a new family pet. Read on to find out more about the Blue Picardy Spaniel and decide if it’s the right kind of dog for you. 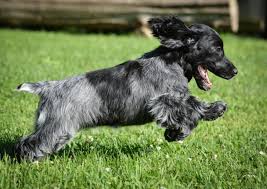 The Blue Picardy Spaniel is a cross between a Picardy Spaniel and an English Setter with French Spaniel roots that lead to their strength as a hunting dog. This breed originates from France and was first documented in 1875. The breed began to rise in the early 1900s. The name for the Blue Picardy Spaniel comes from the dog’s distinctive blue fur coating and the location where they first existed.

“Picardy” was a popular wildfowl hunting spot in River Somme (Northern France). This area was seen as a regular hunting spot for many Picardy Spaniel owners. English Setter owners also migrated to the area as a result of the quarantine restrictions in the UK at the time. The two breeds started to populate together which resulted in the Blue Picardy Spaniel

The Blue Picardy Spaniel typically weighs between 40 and 45 pounds. This dog usually measures approximately 22 to 24 inches in height. The breed is known for its long-legged build which is part of why they made great hunting and sporting dogs. They have either flat or wavy fur with a silky texture, plus the ear-feathering that’s common with spaniel breeds. Their fur is medium-length and sheds moderately.

Maintenance is pretty simple for this breed. You should brush the medium-length coat of their fur twice a week. They should be bathed whenever you feel it is needed. Be sure to inspect their ears after playing or working outside in rough terrain, bushy areas, or in the water. Keep their nails clipped and hair on their paws trimmed.

They are also known for their blue-speckled fur coat. This characteristic triggered the “Blue Picardy Spaniel” name to receive its own designation in 1921. Everyone referred to this breed as a Picardy Spaniel with a blue fur coat before this distinction was made.

The Blue Picardy Spaniel is a well-balanced and adaptive dog on an emotional level. This spaniel breed is known to be friendly with other dogs and animals. Their calm temperament with all other animals makes them a perfect choice for multi-pet households. These dogs will be protective of their loved ones if an animal tries to attack them. The Blue Picardy Spaniel is a type of hunting breed and their instincts will come out in the worst situations. Although, do not be too considered with this aspect as they are easy enough to train around other animals and their patient attitude contributes to their obedience.

This breed will notify its owners if there is ever a stranger around. They are a type of dog that remains on-guard and vigilant. They are known as a quiet dog so you do not need to worry about constant yapping whenever someone comes to visit.

The Blue Picardy Spaniel is friendly, loving, and protective toward children of all sizes. They love playing with kids and anyone else who can match their high level of energy. They thrive off of human interaction and will become your child’s best friend if given the chance.

This breed is very calm yet athletic with a gentle and obedient personality. While they are a hunting dog by nature, their personality and behavior make them a great companion for anyone. With enough space and physical activity, they will be the perfect family pet for any household. Families with younger children and other pets will have no problem bringing this breed into their home.

Hunting hobbyists will especially love the Blue Picardy Spaniel. Their responsive instincts, which come from their spaniel genetics, make them very helpful when on the prowl. They do well in rough terrain and in the water. Further, their calm temperament and ease-of-training make them fast to adapt. Their sporting dog personality is also why they make for great family pets.

While they are known to be calm, that does not mean this breed isn’t fun. Their desire for physical activity makes them respond well to any attempts at play. They are known to love playing with children as younger people generally have a higher level of energy. They are safe with kids and are not known to bite or nip.

The Blue Picardy Spaniel is known to be obedient by nature. Most owners find that training is an easygoing experience. These dogs respond best to a gentle but firm approach. Their major need for mental and physical stimulation makes it important to start the training process at an early age. They learn fast and have high intelligence potential.

A fair-sized yard is recommended if you would like to own this breed because of their demanding exercise needs. Living in an area where it is easy to go for long walks would help. These dogs will respond well to jogging or running as well. Many runners like hunting dogs for the fact that they are known to stick next to their handler and keep pace at all times.

The Blue Picardy Spaniel would not do well in an apartment building and should not be restricted to a kennel for long periods of time. Their need for consistent mental stimulation means they would not make good pets for a family that is too busy to give them proper attention.

The Blue Picardy Spaniel is known to be a generally healthy dog breed. They are, however, regularly at risk of ear infections which is expected with all spaniel breeds because of their pendulous ears. There are no known hereditary health issues but that does not mean you should not worry at all. There are no major studies on this breed and the American Kennel Club does not recognize them so the health-related data is limited.

This breed is at risk of sport-related injuries. They can also run into issues with obesity if you do not give them enough chances to exercise. They are big eaters but have the ability to burn off the energy they bring in through their food. Failing to give your dog adequate exercise could increase the risk of health issues that are known to affect all dogs.

Some other health issues that are somewhat common in this breed include:

The typical Blue Picardy Spaniel lives to be 12 to 14 years old. The most common causes of death are unknown because it is a rarer breed with little to no published study findings. However, you can look at the genetic lineage of the breed to get an idea of what risks might exist. Cancer is the most common cause of death for the English Setter breed and for most spaniel breeds as well.

Keeping your dog active will do wonders for preventing obesity-related health issues from coming up. Even so, many common health issues that affect this breed could develop regardless of your prevention efforts. The only way to make your pet’s health issues easier—and to prolong the life expectancy of a sick pup—is to seek out adequate treatment when issues arise.

Without a doubt, many veterinary bills climb up into the four figures range. A sudden issue like cataracts, hip dysplasia, or cancer, could leave you financially constrained. Not being able to afford these costs when they happen will jeopardize your pet’s health.

Pet health insurance provides coverage against such incidents. For a low monthly cost, you can rest assured knowing that any vet bill will be covered.

To make finding the right coverage plan easy—check out our rate comparison checker and see what options are available for pet health coverage in your area.

What Does Pet Insurance Cost?

The amount you spend on pet insurance a month is negligible compared to what it will cost to fix a serious health issue down the road. Your premiums might be around $35 to $55 per month depending on the location and breed.

Getting coverage early on is essential to make sure you can get protected. This convenient aspect of pet ownership will not be viable once your dog already has a debilitating disease. That said, make sure to compare the fine print between insurance plans when weighing the costs as expenses like claim deductibles could offset a plan’s value.

Get Yourself a Blue Picardy Spaniel

Now you are aware of how convenient, fun, and joyous owning a Blue Picardy Spaniel can be whether you’re a family person or experienced hunter. If you’re on the market for your next pet, by all means consider this breed as there are many upsides and no major downsides.

You will be happy with your choice…

Regardless, take some time to research the best pet health insurance policy. You want to make sure that your Picardy lives a long and healthy life. While the breed isn’t known for any significant hereditary issues, there are still causes for concern and horrifying health problems like cancer can affect any dog at any time.