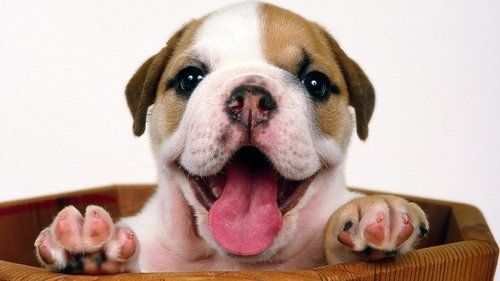 Bulldogs are so adored they are the official mascot of the University of Georgia, Yale University and Butler University, just to name a few!

Referred to as the English Bulldog or British Bulldog, they are one of the most distinct dog breeds in America. Bulldogs were originally bred in the UK to drive cattle to market and were first recognized as a breed by the AKC in 1886.

Nowadays they serve as a great, family-friendly dog. In fact, Bulldogs are ranked the 4th most popular dog breed in the U.S. Despite their ferocious appearance, you won’t find a sweeter or more loving dog breed.

If you’re a proud owner of an English Bulldog or looking to get a new Bully, this page will provide you all the information you will ever need!

Bulldogs have an average lifespan between 8 to 12 years and are notorious for having hereditary disorders and genetic health issues. Unfortunately the Bulldog’s unique body and head make them prone to respiratory and joint health issues. They can also quickly become overweight if they don’t get enough exercise or eat a proper diet (more on that later).

According to the Orthopedic Foundation for Animals Bulldogs have the highest incidence rate for hip dysplasia of any dog breed.Bulldogs are also not very tolerant to heat or cold, so you need to keep an eye on them if you are outside in extreme temperatures. If your Bully seems lethargic or panting it’s time to go inside!

While it’s common knowledge that purebred dogs are more susceptible to genetic disorders than their mixed breed counterpart, English Bulldogs are particularly prone to hereditary health problems. Here is a list of some common health issues for Bulldogs and the average cost of treatment for each condition.

What Coverage Should You Should Have?

These are the most important pet insurance coverages you should have as the proud owner of an English Bulldog.

Just like home, auto or life insurance, pet insurance companies base rates on a variety of factors. The biggest pricing factors are breed, age, where you live and they type of coverage you select.

Here is a sample of what major medical coverage would cost for a three year-old Bulldog across the country.

If you’re considering getting an English Bulldog puppy, then you need to have your finances in order. The average cost of a well-bred Bully is $2,000 to $4,000 depending on where you live and the history of the breeder. But paying for your English Bulldog is just the beginning. You can expect to pay thousands more on health issues, diet and other common care expenses.

Caring for Your Bully

How much your Bulldog needs to eat depends on size, age, build, metabolism and activity levels. While portions are important, the quality of dog food you buy also makes a difference in your Bulldog’s health. Just like people, the better the dog food, the healthier the dog. For this particular breed diet is extremely important because overweight Bullies tend to have far more health issues than peers that are within the healthy weight range.

It’s also important to minimize or all-together cut out table scraps and leftovers.

Bulldogs don’t look like athletes, but they are surprisingly quick and active. Regular exercise, play time and walks are important to manage weight and ensure that your Bulldog maintains a healthy frame. It might sound obvious (again) but just like humans, exercise will help keep your Bulldog’s muscles, joints and ligaments in good working order.

As gross as it may sound, you should brush your Bulldog’s teeth daily, but no less than 2-3x per week. This will remove daily tartar and bacteria that will build up over time without normal brushing.

Bulldogs are average shedders, so you’ll only need to brush them 2-3x per week. However, due to their scrunched head, you should wipe their face daily with a warm washcloth. Some Bully owners find it more convenient and effective to use baby wipes to clean the face. Make sure to clean out the wrinkles in order to prevent dirt and bacteria buildup, which can lead to infections.

You should trim your Bulldog’s nails at least once a month depending on how fast they grow. This will cut down on scratches to the face and body … and your floors and furniture as well!

Bulldogs are expensive to buy and even more expensive to own. Unfortunately, their unique needs come as a surprise to many new Bulldog owners, so some are given up as a result. The Bulldog Rescue Network finds homes for over 2,000 English Bulldogs every year. It is a non-profit 501(c)(3) organization, so your donations are tax deductible. The Bulldog Rescue Network works exclusively with English Bulldogs and has volunteers all across the country.

Due to their popularity here in the states, there are a lot of Bulldog clubs and association. However, the premier Bulldog group is the Bulldog Club of America (BCA). The club was founded in 1890 and later incorporated in New York State in 1904. The BCA has five purposes that were framed by the original constitution of the club.