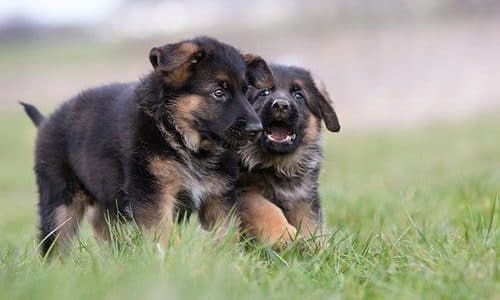 We’ve all heard the term “growing pains.” And while it may seem like more of mental term used for human teenagers, it is a real condition in young dogs. Not only can it cause limping and difficulty in walking, but it is actually painful to the animal. This condition is known as panosteitis and here is what you need to know. We will explore panosteitis in dogs – what it is, the symptoms, any preventative measures, diagnosis, treatment, and what you can do at home to make your pup more comfortable.

While teens grow out of their own growing pains, it is not the same thing as panosteitis. According to VCA Hospitals:

Panosteitis is a painful inflammation of the outer surface or shaft of one or more long bones of the legs. It is sometimes called growing pains. Panosteitis may occur in more than one bone at a time or may move around, causing a shifting lameness that goes from one bone or leg to another. The lameness tends to occur very suddenly and usually occurs spontaneously and without a history of trauma or excessive exercise.

This affects younger dogs from between five months old to about 18 months old and can happen to any breed of dog. Of course, dogs that are larger breeds and even medium to large breed dogs seem more prone to the condition.

German Shepherds are one of the breeds that this is most common. It also affects more Golden Retrievers, Labrador Retrievers, Doberman Pinschers, and Basset Hounds. One thing that is interesting is that these same breeds are the ones that also are more likely to get the blood clotting disorder called Von Willebrand’s Disease. In fact, if your dog does test positive for panosteitis, many suggest that the dog should also be tested for Von Willebrand’s Disease as well.

It can be a common problem in several large breed dogs such as:

Why Does It Happen?

The problem is that there is no solid answer as to why some dogs get this condition and some do not. Just like humans, it simply happens to some and not to others. It happens in male dogs more often than females and as stated, it is more common in larger dog breeds. It is interesting to note that in some cases there are other orthopedic diseases that accompany this condition as well.

There has never been an infectious agent isolated but there are theories. One is that a high protein dog food diet may be the culprit. This is because swelling in the bone is caused by a protein buildup in the dog’s bone marrow. A bone cannot expand since it is rigid and hard so this puts undue pressure onto the blood vessels. This can cause inflammation and tissue death along with panosteitis. But, this is just a theory that has not been proven – along with other theories that are not solid science as of yet.

Some theories suggest an infectious cause due to these dogs having a high white blood count and fever but again, nothing showcases this as solid science.

Last but not least, since there are certain breeds that get this condition more often, it may be a matter of simple genetics. These are all ideas that still have to be further researched and tested before finding an absolute.

How Is It Diagnosed?

According to Veterinary Partners:

There are a few symptoms to be aware of. One symptom is that the dog has difficulty walking with the front legs. This is because the dog has pain in these legs from panosteitis. This can happen in all four legs but typically, it is more often found in the front legs rather than the hind legs.

Some dogs may have symptoms that seem contrary to this condition such as a fever, anorexia, depressive state, and weight loss. Of course, other issues should be ruled out first which is why a vet can perform the right tests to be sure.

How Is It Diagnosed?

Your dog should be under a vet’s care if you think that he may have panosteitis. The veterinarian can rule out other causes for your dog’s symptoms such as inflammation. X-rays may be needed to determine if it is this condition and in some cases blood work is also needed to make a determination. This is why pet insurance can really help out. It ensures that you pay less at the vet so that your dog has the best care with lower expenses for you.

What About the Prognosis?

The good news is that this is easily managed with prescription drugs to treat the inflammation. It is also a temporary condition but can last just a few days in some cases while others may last for months. Since this can only be treated to relieve the pain with anti-inflammatory drugs, there is nothing that can be done otherwise other than allowing the dog to grow out of it. Even though this is a painful condition, it won’t last and the medications should help your dog be more comfortable.

No one wants to see their dog in pain and we are all thankful that this is a condition that won’t last and can be minimized with the right care.