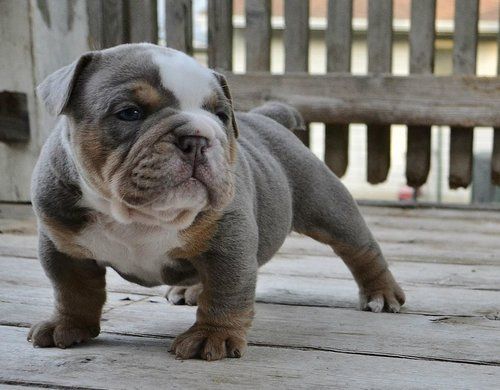 The Olde English Bulldogge (OEB) is more than just a breed with an oddly spelled name. Despite its name, its origins are in the United States and actually go back to only the 1970’s.

It was during this decade that an American, David Leavitt, bred English bulldogs, American bulldogs, Bull Mastiffs, and American Pit Bull Terriers to create the OEB, with the new name distinguishing it from other bulldog breeds and the spelling a nod to Old English.

The OEB bears a strong resemblance in its short coat and coloring (typically a brindle of red, fawn or black, solid or spotted; or white, fawn, red or black, solid or spotted) to both the English and American bulldog. In terms of size, the OEB typically falls somewhere between the two, with males averaging 60-80 pounds, 17-20 inches in height; females averaging 50-70 pounds and 16-19 inches in height.

The Olde English Bulldogge is not as short and stocky as the traditional English bulldog, but not quite as tall and lean as the American bulldog. As a result, the OEB looks very much like a mix of the two and shares positive traits with these other breeds, namely a strong sense of loyalty and protectiveness. The OEB is regarded as a particularly good pet for families, for the qualities just mentioned as well as the easy going temperament that allows it to get along well with people, including children, as well as other dogs.

What Makes the OEB Unique? How Are They Different from Other Bulldogs?

However, while the OEB is similar to the English and American bulldog in many ways, it is different from these breeds in significant ways, as well. Two of the goals in breeding the OEB were: 1) to create a breed with a similar look and athleticism, but with a less aggressive temperament and 2) to produce a breed that would have fewer of the health issues associated with other bulldog breeds.

The aggressiveness that has historically been associated with other bulldog breeds, specifically the English Bulldog, is no doubt a result of the breed’s traditional use in bull-baiting in England. The crossbreeding accomplished by David Leavitt in the 1970’s was part of a successful attempt to produce a breed similar in appearance to the classic English bulldog, but with less a less tenacious demeanor.

As a result, the OEB is a unique hybrid that combines the best traits of both the classic English bulldog and its American counterpart, with fewer health issues.

Caring for your Olde English Bulldogge

Diet: Because the OEB is a large breed and typically an active one, they require nutritionally rich diet. A high-quality dry dog food specifically made for large, active breeds is the best choice for your OEB. Approximately 3.5 cups of food per day, divided into two servings to prevent overeating, is recommended.

Grooming: The good news is that since the OEB’s coat is short, they do not typically shed a great deal and only require minimal brushing. Additionally, they only require the occasional bath just to keep their coat looking shiny. Of course, being an active breed, they may occasionally get particularly dirty, in which case you’ll want to give them a bath. As with all dogs, you’ll also want to periodically trim their nails when they get too long.

You can do this yourself, but if you’re taking them to a groomer for a bath they’ll be happy to trim your OEB’s nails for you. Similarly, most dogs will need their ears cleaned occasionally to remove debris and irritants and prevent infection. This is another thing you can do yourself, using a cotton ball or pad to gently wipe inside the ear flaps, but they’d be happy to do this for you during a trip to the groomer or the veterinarian.

Although the OEB is a particularly healthy bulldog breed, there are still some things you will want to watch out for. While hip dysplasia is significantly less common in this breed, their English bulldog genes do leave them with some susceptibility to it.

The best thing you can do is to take notice of how your OEB is moving and look for any signs of limited mobility, walking noticeably slower, not being able to run or jump, having trouble going up or down stairs, difficulty standing up from a lying position, etc.

Regular trips to the vet will also help to head off any problems before they arise, or to catch them early and avoid the problem getting worse. The other common issue the OEB can experience is bloating but avoiding overfeeding and giving them two smaller meals a day instead of all their food at once can help greatly with this.

The OEB, despite not being strictly English and not particularly old, is a unique breed that offers all the best traits associated with bulldogs but with fewer potential problems. They are fiercely loyal without being fierce and courageous without being aggressive.

In addition to being beautiful and athletic dogs, they can get along with every member of the family and are remarkably healthy and easy to care for. The OEB is the perfect companion for any dog lover.