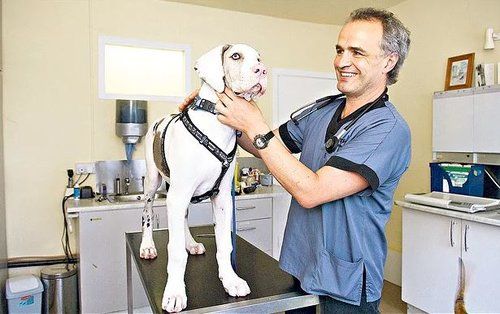 Gastric Dilation Volvulus, also referred to as stomach bloat, GDV or gastric torsion, is very serious condition in where the dog’s stomach becomes overstretched and rotated by excessive gas. GDV is a condition that requires immediate emergency treatment. Dogs that receive prompt surgical treatment are twice as likely to survive GDV.

Some dog breeds are more susceptible than others. For example, using the GDV risk ratio, a Great Dane is 41.4 times more likely to develop GDV than a mixed breed dog.

GDV is seen most commonly in large and giant breed dogs. The syndrome is characterized by accumulation of gas in the stomach and mis-positioning of the stomach with obstruction of eructation and pyloric outflow.

Clinical signs of the disease include a distended, tympanic abdomen, retching and vomiting. Affected dogs will present with signs of tachypnea, dyspnea, tachycardia, pale, dry, or muddy mucous membranes, lethargy and possibly coma.

Subsequent systemic effects of GDV including hypovolemic shock, endotoxemic shock, respiratory compromise, concurrent metabolic acidosis and alkalosis, and reperfusion injury are all implicated in the resultant death of affected dogs.

GDV should be considered as a disease requiring emergency medical attention.

The air in your dog’s stomach will be removed either by passing a stomach tube or inserting a large needle into the stomach and releasing the gas. Some dogs with GDV develop a bleeding disorder called disseminated intravascular coagulation (DIC), in which small clots start to develop within the dog’s blood vessels. To prevent or treat this condition, heparin, an anticoagulant, may be given. Dogs that already have a heart disease or are prone to heart arrhythmia’s are generally treated with appropriate medications.